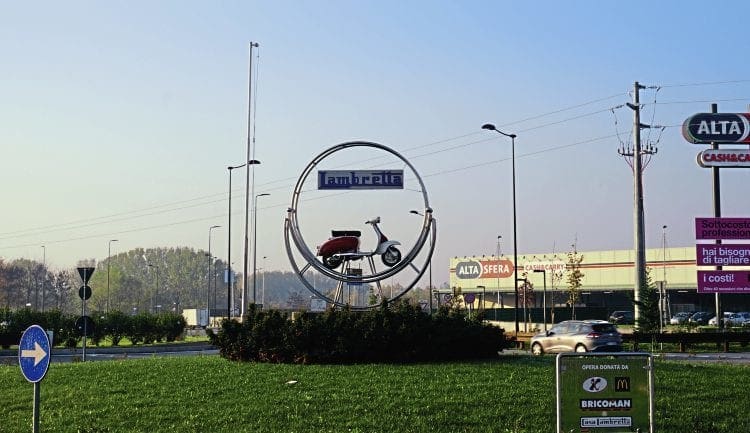 The 70th anniversary of Lambretta’s first production run is celebrated in 2017, and for many readers a visit to the company’s factory site is high on next season’s wish list. Scootering paid a visit to see what remains.

Common sense, but we’ll say it anyway: most of the old Innocenti factory site is private property, surrounded by a security fence. Enter without permission and you’re in the wrong. End of discussion.

The factory site is mostly derelict and that means potentially dangerous. Don’t expect a ‘where there’s blame there’s a claim’ lawyer to come running if you get injured. The buildings may look neglected but security guards do patrol them. When we visited the guards on duty that day were sympathetic and allowed us to get close to the buildings. Other guards who are not as sympathetic will ring the police. Fortunately most of the site can be seen from the roadside.

The walk starts and finishes at a retail park where there is a McDonald’s but there are no cafes or shops on the route, so take some water if it’s warm. It’s possible to ride a circuit around the factory site but the roads can be busy. We’d suggest plotting your route based on the landmarks below and then riding it first to work out where you want to stop without causing an accident,

The best way to see things is on foot. This tour uses public footpaths and takes about an hour and a half, depending on how fast you walk. If you walk quickly it’ll take a little less — if you dawdle, a bit longer. If you get arrested for trespassing it could take quite some time.

Unless you’ve a complete grasp of Italian bus routes, the easiest way to visit the site is by car or scooter. This isn’t the prettiest area of Milan, so we’d suggest parking on the retail park near to the ‘Lambretta Roundabout’. To find this by sat-nav search for ‘Via Lambretta’ or, if you’re a fan of irony, ‘Via Rinaldo Piaggio’ as the roundabout is where the two roads meet.

Unveiled in 2014, the roundabout is intended as a lasting memorial to the importance of Lambretta to the area. It consists of a stainless steel structure, reminiscent of the old Lambretta display stands, containing a Series 2 LI. Surprisingly this isn’t a fibreglass mock-up or representative shell. It’s a genuine machine, so complete that it looks capable of being ridden. It would probably last about 24 hours in the UK.

From the monument turn right at the roundabout onto Via Caduti De Marcinel le (keeping the Alta Sfer store to your right-hand side). The first landmark is the water tower on your right. The Innocenti logo has long since disappeared beneath graffiti and in an effort to prevent further damage the ladder has recently been severed.

The two surviving factory pavilions can be found on the left of this road and it’s only here that the scale of production becomes readily apparent. At one time the factory canteens were catering for 7000 people and there were on-site dentists, doctors and opticians.

The first pavilion is largely intact and is the kind of place that guard dogs call home. The second pavilion is in much worse condition, the roof is missing, as is most of the wall cladding and foliage is slowly taking over. It’s incredible to think that beneath this undergrowth are a network of tunnels that once transported gas, water and electricity to the exact spot in the factory where it was required. Metal shavings from machinery were funnelled down into the same tunnels and transported to the factory’s foundry where they were immediately recycled.

On reaching the end of the second pavilion, just before the flyover, turn left along a footpath that leads to a car park. This too has its place in Innocenti’s history, having been the storage area for Italian-built Mini cars awaiting delivery.

Once at the main road (Via Raffaele Rubattino) turn right, walk under the flyover and go straight ahead at the roundabout, walking over the Lambro River. The unassuming office building immediately on your right was Studio Centrale, the home of Innocenti’s research and development department.

It’s probably the best preserved building from the Lambretta era. Rumours periodically surface that this will be the home of an Innocenti Museum, but to date nothing has been agreed. At the time of our visit the office block appeared to be preparing for new occupants and there is a resident caretaker/guard. 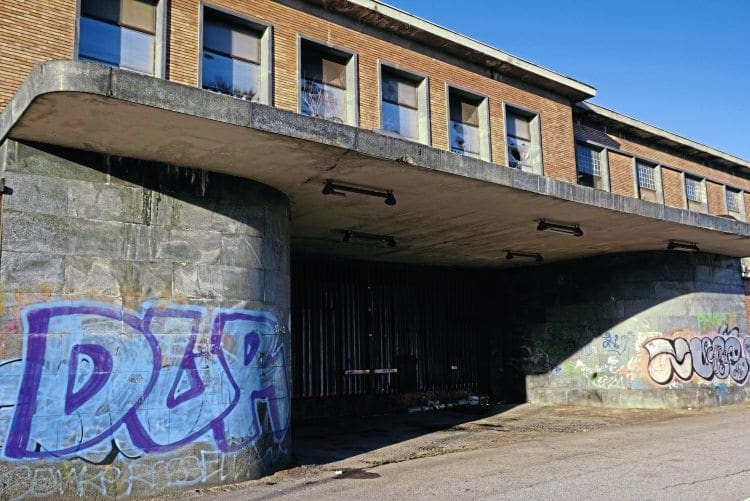 Continue walking along Via Raffaele Rubattino until you come to a derelict building with 1940s architecture on your right. This was one of the factory gates and there’s a gap in the steel shutters just large enough to catch a glimpse of undelivered GP200s still in crates gathering dust. Not really! It’s actually a facade with high rise housing behind it. If your trip involves taking a photo of your scooter at an Innocenti building this is probably the safest location as there’s an unused access road with free parking spaces in front of it. 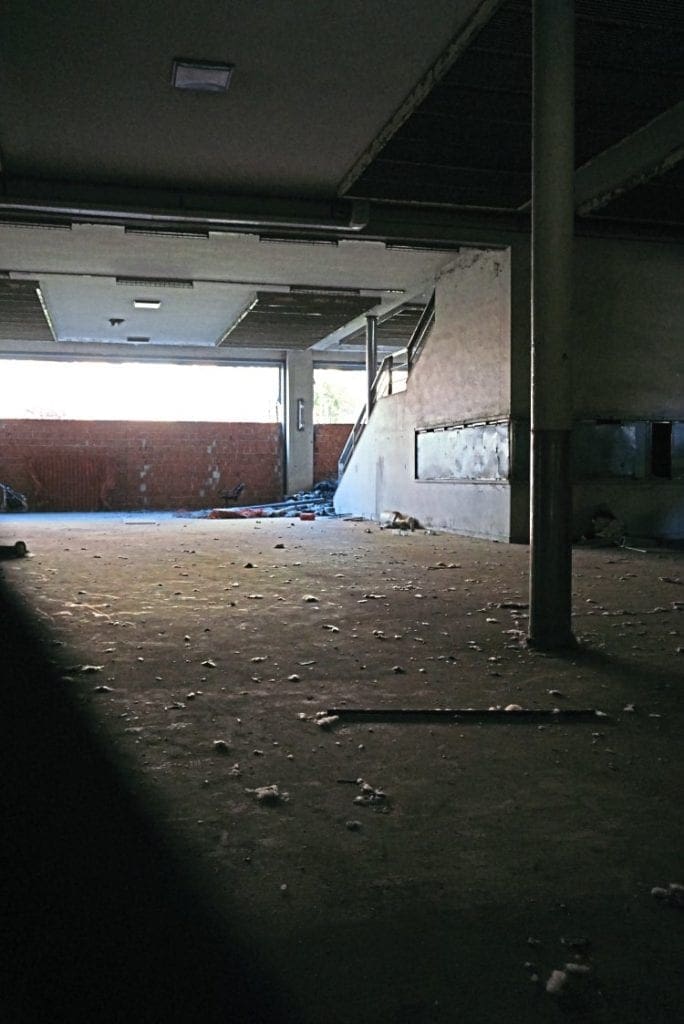 Before turning back, a glance towards the end of the street will reveal two large concrete ‘cones’, the remnants of Innocenti’s wartime munitions plant.

Having reached the factory’s extremity turn back and head under the flyover along Via Raffaele Rubattino. Here it’s possible to follow the factory wall, much of which still remains, as does the main factory gate. This has a large space in front of it but road access points are blocked by concrete barriers.

At the roundabout turn left along Via 5 Maggio and go straight ahead at the roundabout. This will lead you back to your starting point and a welcome rest at McDonald’s. 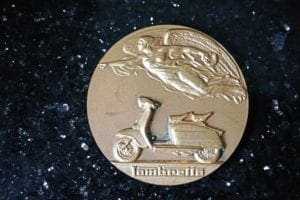 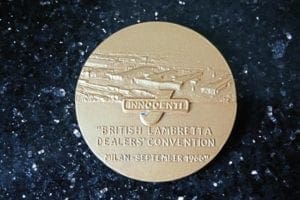 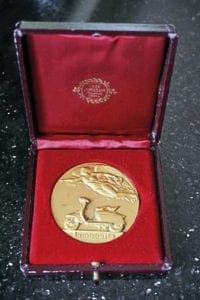 The rally patch has been the keepsake of choice since the 1980s but back in the factory’s heyday souvenirs were distinctly upmarket. This medallion was issued by Innocenti to commemorate The British Dealers’ Convention of September 1966. Measuring 50mm in diameter it’s made of a heavy gilt metal and retains its original fitted case marked ‘Johnson Milano Roma’. (If Johnson’s of Milan doesn’t sound particularly Italian it’s because the company was founded in 1836 by an Englishman and is the oldest producer of medals in Italy). The same design was used for various important visits with the wording being changed accordingly.