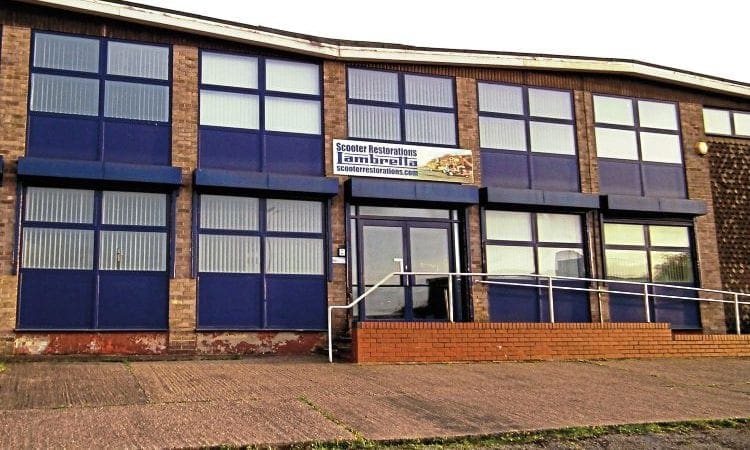 Since the late 1980s, one scooter dealer has independently stood out from the rest and pioneered importation from India: Scooter Restorations…

Paul Brierley has always had a passion for scooters and most notably the Lambretta which is where his real interest lies. He got his first scooter as a young teenager in 1980 and today successfully runs one of the biggest businesses in the industry. During the intervening years, he was responsible for being one of the instigators of the Indian revolution that has helped thousands of Lambretta owners keep their machines on the roads over the years.

I first met Paul some time in 1989 on an open day at Midland Scooter Centre. Our paths had crossed due to the fact we had both been clearing the old stock from Lambretta dealers around the country. This was where he first told me about a trip he had made to India and about how he was going to start importing Lambretta spares from there. It was a bold decision to make at the time. Interest in the scooter scene was at the beginning of a downward trend after the frenetic period of the 1980s. Of course, it went on to be stronger than ever but at the time Paul took a big risk not only setting up on his own but also preparing to buy in stock from abroad as a base for the business.

Up till that point, he had been trading at National rallies and shows selling what he could find around the country. This was always going to be a limited supply and realising that there was potentially an endless resource in India, that’s when he took the plunge. Scooter Restorations first opened its doors to the public in September 1991 and Paul has never looked back since. Though he was keen on restoring scooters and as the name suggests you would think that’s what the business did, this was not the case.

The idea was simply to trade in spare parts and accessories, leaving the mechanical side to other scooter shops. This would allow far more time to concentrate on sourcing supplies which would often mean trips abroad. These were tedious and at times rather long travelling to India to negotiate deals to import back to the UK. His first trip to the SIL factory in 1990 was where the foundations of the business were laid which have supported it ever since.

In the early days, SIL was still in the business of producing scooters, which meant a great availability of spares. Actually, everything that went into producing their Lambretta GP model was available. Paul realised that he could stock virtually everything that was needed to build a Lambretta, making it far easier for customers when buying. No matter how small the part was, he could stock it which would mean a big incentive for customers to shop with him.

Setting up the infrastructure required would take time and need careful planning to get right. One of the most important things was setting up a supply chain from India. It was a case of Paul not only needing to trust that what he ordered he got but also sorting out shipping, customs, and import duty before getting it back to the UK. Quality control has always been a problem when ordering from the Far East and it seems the key to success in this area was by gaining a strong working trust with suppliers. With Paul prepared to order in huge quantities, a bond was soon struck up and one the Indians didn’t want to ruin by sending substandard parts.

The next part of building the business was where to stock it all. With the huge volume of spares coming over, the space needed to house it all would be at a premium. Originally situated in Bulwell on the outskirts of Nottingham, this would be ideal for passing trade as it was fairly central to the country. This was important as in the pre-internet days the majority of trade was done over the counter.

For any business to grow or get noticed it needs to advertise and Paul invested a respectable budget in this department, thus Scooter Restorations soon became noticed and was renowned for having large quantities of stock at competitive prices. As the scooter scene picked up again during the 1990s, the business was in a prime position, with the advantage of already being firmly established and having a great reputation. Rather than rest on his laurels and take profits from the business Paul has continued to invest.

A major part of this was by moving to a new location which was far greater in size. However, rather than just rent, and pass on the cost to the customer, Paul opted to buy instead. That way there are no rising costs in rents and the original investment in the property would grow over time. The factory, which is the best way to describe it, is huge and easily houses the constantly evolving stock range. The extra space also meant a far more efficient and smoothly running business. When looking around it’s clearly evident how all this works and one of the reasons Paul has been so successful.

Keeping ahead of the competition

As the internet era dawned at the beginning of the millennium, so too did the competition. This was on two fronts: firstly, from all the businesses which set up online shops virtually overnight, and secondly from all of the factories in India and the Far East offering supplies. Rather than accept defeat, Paul and Scooter Restorations rose to the challenge and made sure they were in prime position to soak up all the trade. Not only was an easy-to-use online shop created but one that offered quick payment, dispatch, and next day delivery. Offering a good discount to the trade allowed Paul to buy in more stock knowing that he had a bigger outlet to sell it. That way, parts could be imported in huge quantities, meaning it was rare to run out of stock which is one of the pet hates in online shopping. As time went by, a lot of the competition that had sprung up out of nowhere vanished just as quickly. Scooter Restorations had weathered the storm in their own way by being clever how they went about business.

Over the years it has become harder to get supplies from India and Paul knows it won’t last forever. One of the problems is when management changes over in India and a new relationship needs to be formed. Knowing that a dwindling stock supply would harm business, he has constantly looked for any other places from which to purchase. Just recently, he bought the entire Serveta stock from Bedlam scooters who cleared the Spanish factory out years ago. Though these are only one-off deals they still help with continuing to provide a steady flow of quality parts.

As for the customers themselves, well that’s another debate entirely. For years we have all been saying ‘how much longer has the scooter industry got?’ and when it goes into a slight seasonal decline, some think it’s over… just for it to bounce back even stronger. It can be presumed that trade will stay steady if not grow for the next few years but in the meantime, the plan is to run the business as efficiently as possible. This is being done by streamlining the online shop to make it as easy as possible for those wishing to purchase, and by passing on deals where possible with bulk orders when the buy-in price is right, rather than just trying to gain maximum profit. That way the chance of repeat custom is much greater and loyalty rewarded.

It is not too often that a business in the scooter industry is seen to stand the test of time. Scooter Restorations has done it the hard way, by relying purely on the sale of spares and not by taking on work to keep the business afloat.

Paul has proven that this business model can work, if you put the effort in. More than that though, he has put a lot back into the scene by sponsoring scooter-related events and donating to shows and rallies. Paul Brierley and Scooter Restorations should be applauded for the contribution they have made to the Lambretta and scooter scene in general. Long may they continue.