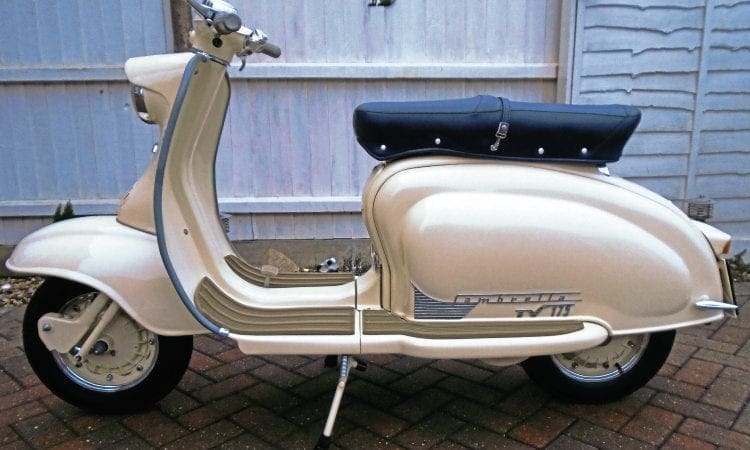 During Innocenti’s 24 years of Lambretta manufacture it came up with some exemplary and often innovative designs, none more so than the  TV 175 series 1. Though it only had a short production life it left behind an ever lasting legacy. To some it was controversial but to others iconic; a Lambretta that still divides opinion to this day.

Andrew Godfrey’s first foray in to the world of Lambrettas came in 2004 when he went to purchase a Li150 series 1 frame breather. This wasn’t his original choice, in reality he wanted a TV 175 series 1 but the hefty price tag of any that came up for sale put him off. The Li had been sold before he got there but as luck would have it the dealer told him of a TV 1 for sale in Leeds that was an acceptable price. Without hesitation he followed the lead up and soon enough the tatty but complete example of the Lambretta he had always desired was in his possession.

Where do you start

With any Lambretta restoration it’s a case of stripping it down to see what needs repairing and what needs replacing. Usually any parts missing can easily be obtained whether remade or second hand. However, the TV 175 series 1 is a totally different scenario when it comes to restoration. When Innocenti first introduced the TV 1 in 1957 it was a totally new concept. Though launched at a similar time to that of the Li series 1 range there was no compatibility between any of the components.

When the TV 175 series 1 was launched this idea changed and all Lambretta models would be compatible with each other in the future. As the TV 1 was only produced for around a 12 month period it left a very limited amount of spares either new or second hand. Consequently few manufacturers have done very much in the way of remaking parts as the market is very limited.

Undaunted by this prospect, Andrew fully stripped the machine down and began the long process of trying to acquire what needed replacing. With quite a long list this was going to be a lengthy and time-consuming process. Luckily most of the bodywork and main frame remained intact and in fair condition. Though rusty and in need of repair this job was within the realms of a competent painter.

Now the real detective work came in, sourcing exactly what was required. One of the knock-on effects from the uniqueness of the TV 1 is at the time of production many dealers stocked up on spares that quickly became redundant. Left with a choice between scrapping them or hoping that one day they may be of use, a considerable number were left behind.

Armed with this knowledge Andrew visited several dealers who had cleared Lambretta stock up in the 1980s. Nigel Cox of Weston Scooter Parts fame had quite a considerable amount of original unused TV 1 stock and became a big source for the list of required components. Quickly parts came in from Italy, America and Australia as well as all round the UK.

Andrew soon realised many of the components required for the rebuild would have to be never-before-used Innocenti items, even though the cost of acquiring them wasn’t cheap. This scenario now shone a different light on the whole project: a Lambretta that was from the 1950s but the majority of which was new.

Right people for the right job

Getting the most experienced and skillful people was a necessity for the specialist parts of the restoration. The bodywork repair and painting would become the responsibility of Nick Travveler at Italia Refinish in Clacton. Using Lechler Ivory 8028 as the correct colour it was finished to the highest standard and did the 50-year-old steel justice.

The engine was more of a problem as there are not many dealers that have ever tackled rebuilding the complicated layout of the TV 1. Not only is it totally different to that of any other Lambretta engine, it also requires a different set of tools to put together. Jem Booth from Blackpool took the job on not once but twice. Originally Jem had done the rebuild using the original engine only, for an unused set of casings to turn up at a later date. The engine was built again this time using the new casings as Andrew continued to complete everything to the highest possible standard.

With the paintwork and engine finished, the slow process of rebuilding the machine could continue. The reason it was slow compared to a normal restoration was down to the fact that there was still a lot of parts that needed sourcing. Undaunted Andrew continued his search until finally everything required was found. In the end the restoration from start to finish took a period of five years, probably one of the longest in Lambretta history. Most people would have given up by that time but it shows the dedication and commitment Andrew has given this project. Why use so many original Innocenti items? Well, often there isn’t much choice when restoring one of the rarer Lambretta models. It also leaves you to wonder which was the bigger achievement — restoring the Lambretta or the years searching for everything to complete it?

The results of all that hard work can be clearly seen in the finished product. Not only is it a great example of one of the rarest Lambrettas produced but also probably the finest attention to detail ever seen on a restoration. Though he is more than happy to have completed it Andrew has no plans to ever try it again — which highlights how time-consuming the whole project has been.

Though it has been finished for several years, this stunning example of a TV 175 series 1 has not done many miles since it was completed. There are many purists out there who think all Lambrettas should be ridden regardless of their rarity but certain factors need to be taken in to consideration. There are only a handful of TV 175 series 1 Lambrettas still in existence in the UK and not many more elsewhere in the world.

Also, it must be remembered that the tyres gracing the machine are period to when it was manufactured and are not fit for use on the road. The process of fitting roadworthy tyres is laborious and time consuming, certainly for a short ride out. In the end it’s the owner’s choice whether they wish to use it on the road or not.

There are many rare vehicles all over the world that sit in museums and never turn a wheel. In Lambretta terms this is one of the rarest machines and even though it isn’t used daily does go out on the road from time to time and is seen in public.

Obviously Andrew would never take it out in rainy conditions but does use it in the dry. It’s important for any machine to run every now and then to keep it in perfect working order and that is exactly what happens in this case. Far from keeping it behind closed doors both machine and rider have attended every Euro Lambretta since 2009 and won the concours d’elegance no fewer than seven times at the event. Knowing just how much time and sacrifice went in to this restoration, no one can blame Andrew for not using it too much. He did have a moment of madness a year ago and thought about selling his prized possession. Luckily reality kicked in and he now plans to keep it indefinitely. What we can thank him for is his dedication in not only resurrecting an important part of Lambretta history but keeping it preserved for future generations.