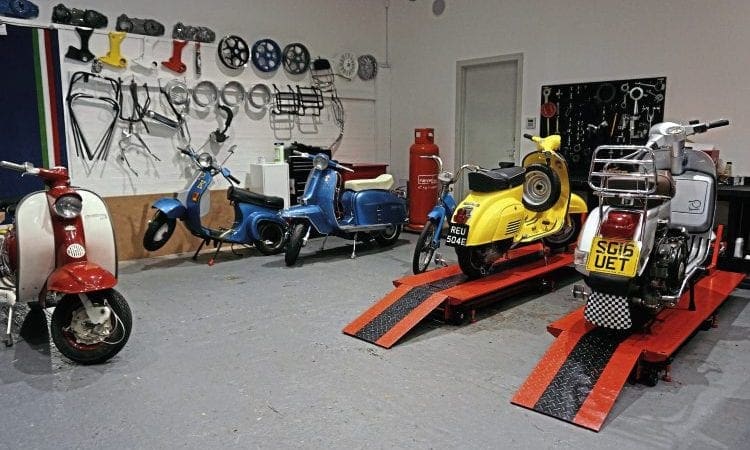 We’ve all received poor service at some point but few of us would go to the extreme of setting up our own franchise as a result. Scootering visited Go Full Throttle, a dealer determined to do things differently.

Like many towns Kilmarnock has an area where car showrooms congregate together. Just off this main strip is Go Full Throttle, a Piaggio dealership that’s going from strength to strength. Behind that success is David Boyd, a man with a passion for all things scootering but with a particular love of Vespa small-frames.

“Saying that we work in a unique way is a big claim,” says David. “But I’m not aware of another scooter dealer that operates as we do at Go Full Throttle.” Having cut his teeth in the 1980s with the usual selection of scooters and rallies David moved away from scootering as pressures of career and family grew. As we all know once scooters are under someone’s skin the desire to own one isn’t far away. For David it was a family holiday to Scarborough that rekindled the desire. “We drove past AF Rayspeed and there were some Lambrettas parked outside. I knew that I wanted one there and then. Within a few weeks I owned a Series 2 and a year or so later there were nine scooters in the garage!” Having forged a successful career in electronics David used his business experience to pay for his new found hobby by selling various spares via the internet. By avoiding the usual poor quality components David built up a reputation for fair dealing and his web based venture began to grow.”

“Among my gaggle of scooters was a GTS,” explained David. “It required a small amount of warranty work so having booked it in for repair I set off to a garage. On the ride there I encountered all four seasons of weather and arrived thoroughly soaked.” 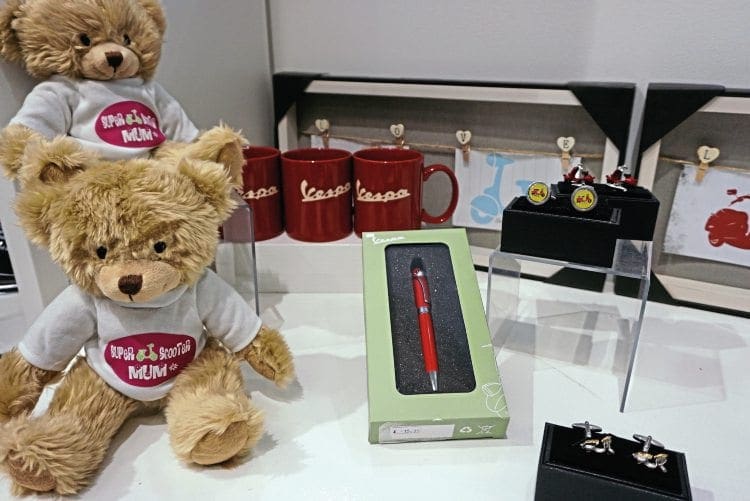 David wasn’t too concerned though, it’s all part of riding after all; what he didn’t expect was the garage’s attitude. “I’d grown used to the service provided in car showrooms. I didn’t expect much, just somewhere to sit, get a warm drink and dry off my waterproofs while the warranty work was conducted. The garage owner pointed me in the direction of a tea room on the high street where I made a nuisance of myself, taking up space and having to repeatedly buy food and drink to avoid being thrown out” David shakes his head while telling the story. “I couldn’t believe what had happened, the level of customer service was nothing like what people have come to expect. I came home, looked at where dealers were located in Scotland and realised that there was a business opportunity. I started talks with 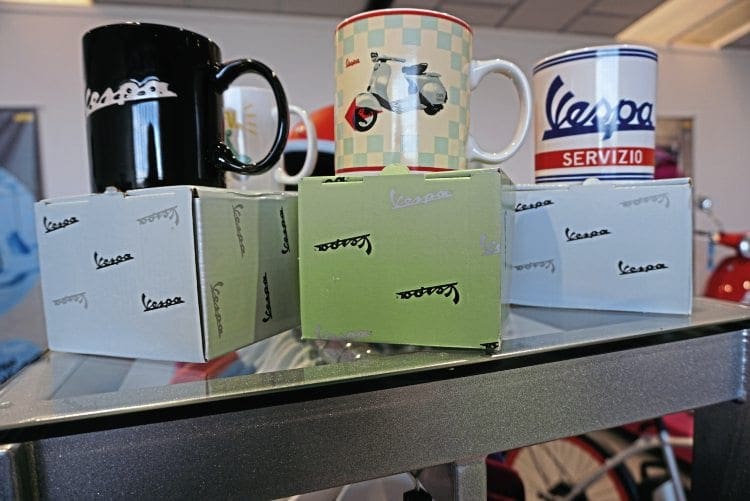 Piaggio and Go Full Throttle is the result.”

Once I’d got used to the large and very modern showroom area the first thing I noticed was the open plan workshop, something that David was very keen to explain: “I want everything here to be transparent. If customers want to they can stand and watch their machine being worked on. There’s nothing worse than knowing that your pride and joy is being worked on and hearing hammering. Here it’s possible to see exactly what’s going on and ask questions of our mechanic.” 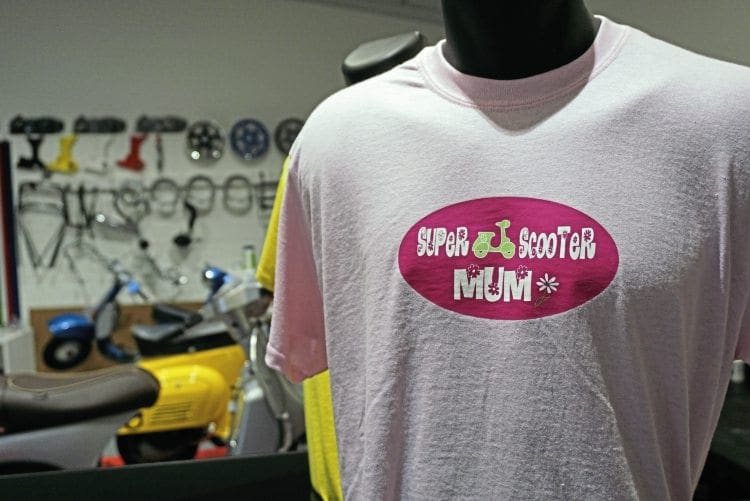 With David dealing with customers, spanner wielding is handled by Paul. “Not every mechanic is willing to be watched while they’re working. I’d known Paul for some time and he was keen to be involved in something so different, making him a very important part of what we’re trying to achieve here.” Paul is a fully qualified mechanic who comes from a scootering background but moved onto large motorcycles some years ago. Since starting work here the scooter bug has bitten him once again and motorcycles now share his garage at home with a Series 2, a new PX and a GP.”

If a customer wants to sit back and relax while work is carried out, there’s a comfortable seating area with complimentary drinks, TV and magazines to pass the time. If a longer spell in the workshop is needed, Go Full Throttle can arrange to connect customers with public transport.

David is quick to reassure potential customers that Go Full Throttle is still competitive on prices: “This is a very competitive market, we wouldn’t survive by passing these costs on to customers. Proof of that is our rapid rise to being the largest Piaggio dealer in Scotland. That doesn’t happen by being the most expensive.”

In addition to the workshop and showroom, Go Full Throttle carries an ever expanding range of spares. “That side of business is growing all the time,” explained David. “From my internet sales I’d a good idea of what sold quickly and I always make sure I’ve a good range of ‘critical spares’ in stock. When someone asks for something we don’t stock I’ll usually order a couple to make sure I’ve got it covered for next time. More recently I’ve started to keep consumables for engines that have been kitted by their owners.” David and Paul have recently branched into restoring machines for customers and this is an area that they intend to expand further.

Go Full Throttle is a very modern approach to scootering but at heart it remains the vision of an enthusiast: “I know people have a lot of choice out there, when they buy a machine from us I like to make it special. When they arrive we have their scooter on a small stage and covered so we can reveal it to them. We have a little thank you pack and take photographs of the handover. Buying a scooter for most of our customers isn’t a purely practical decision, its one born out of love. I like them to know that we share that passion.”

SMALL FRAMES UNDER HIS SKIN

It’s a well-used cliché but for David’s enthusiasm really is more than skin deep. His first scooter was a V100, followed by a V90. Although he’s owned many different scooters, both Vespa and Lambretta over the years, his first love remains the Vespa small frame. If you’re lucky his Vespa 50 may be in the workshop when you visit. 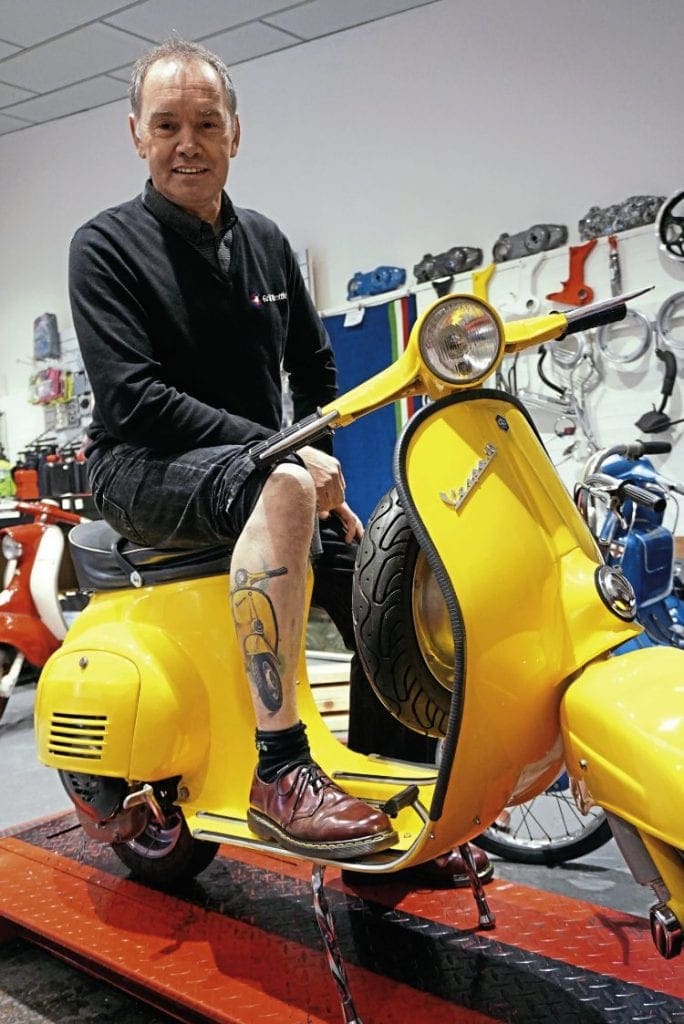 “When I started to weed out my scooters I couldn’t bring myself to get rid of this V50,” says David. “I’d spent a long time getting it back to exact factory specifications only to rediscover how poorly a standard V50 performs! It’s now acquired a Polini 135 top end and racing exhaust. The power-band is quite astounding — brakes are next on the list!’ 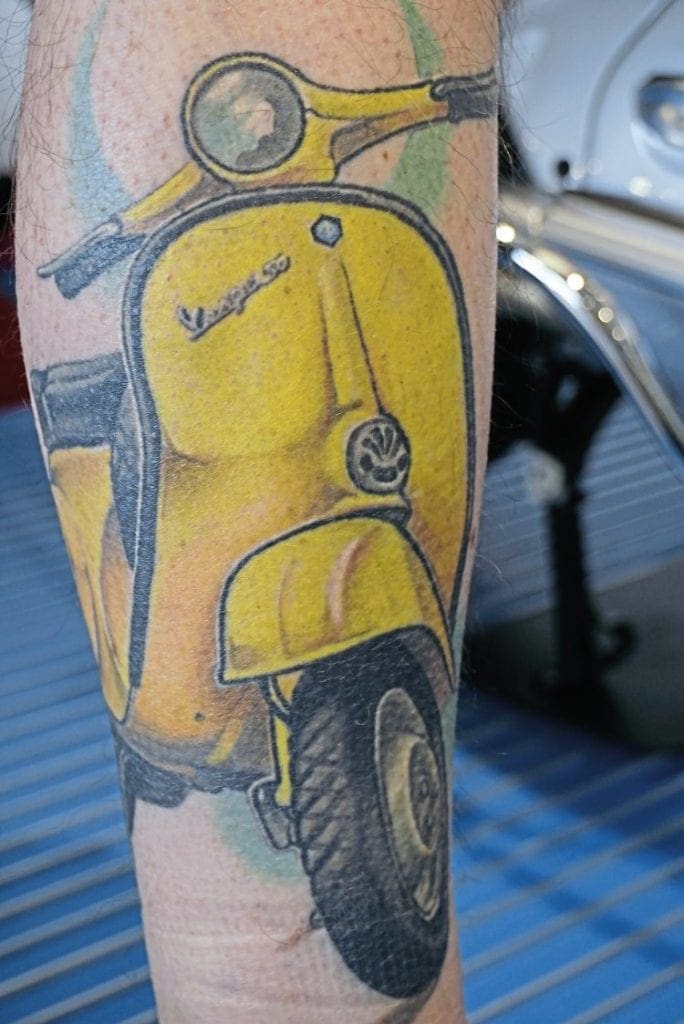 David was so fond of the V50 that he decided to make a permanent show of his affections. “We drafted the artwork out at home and sent it to the tattooist but when I got to the studio he’d made an A4 template — about twice the size I’d intended. He persuaded me that it needed to be that size to get enough detail into the image. My wife was quite taken aback but she’s forgiven me now. Or at least I think so!” When I ask David for his pick of the current range he laughs, “The Primavera of course.”

In addition to the machines on display there’s a considerable amount of merchandise to browse through and purchase. This includes a wide selection of riding wear and Piaggio branded items but also an expanding range of products that are unique to Go Full Throttle. “My wife Lisa is the artistic member of the family,” says David. “She’s produced a range of designs which we’ve turned into greetings cards, each of which can be personalised if required. We’ll soon be producing our own range of T-shirts using her artwork.” 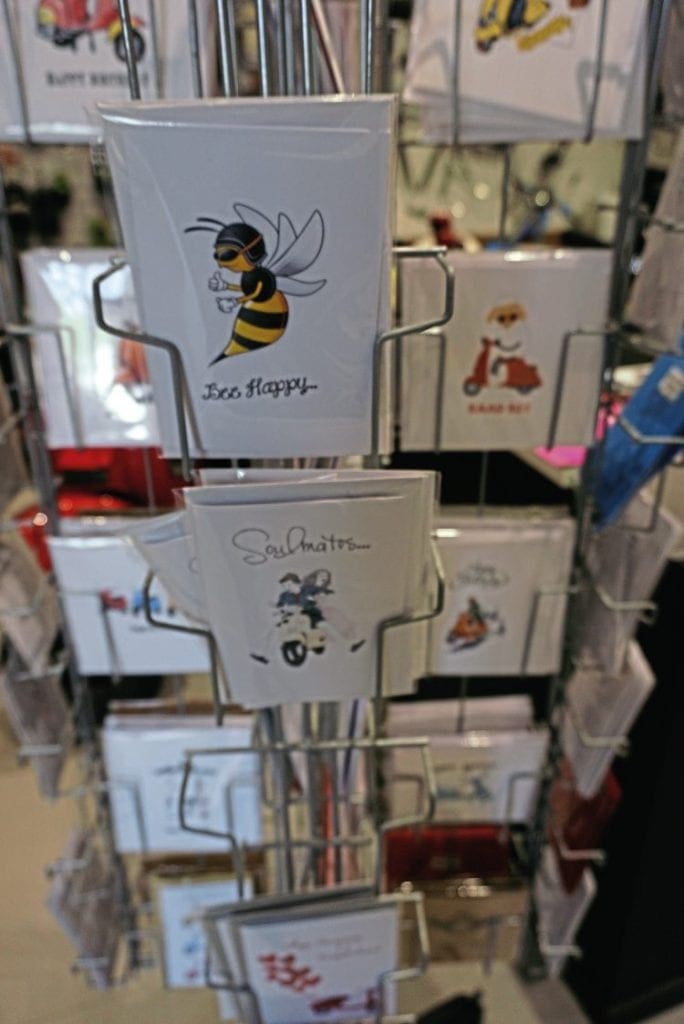 Because the cards are produced in house they can be adapted for occasions such as Christmas, Father’s Day or anniversaries. The range, which has very high production values, can be seen on the Go Full Throttle website together with order details and prices. 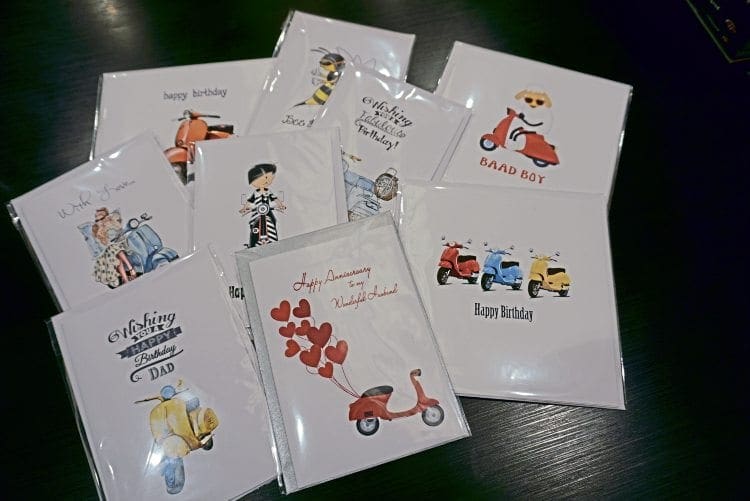