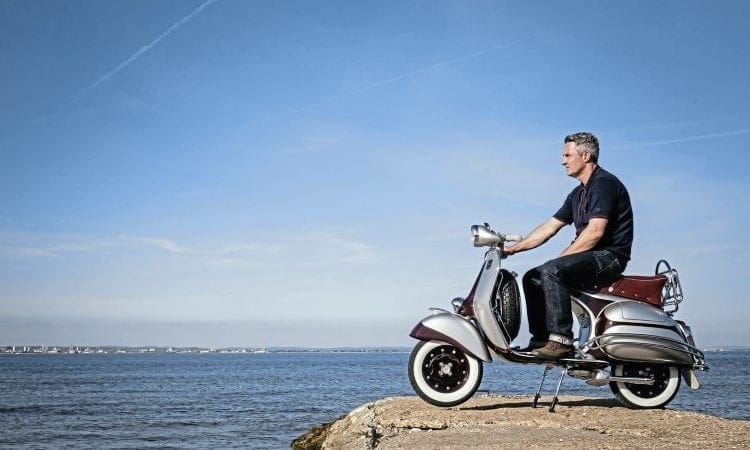 Matt Babbington’s beautiful GS150 has already picked up a plethora of awards, and since then Matt’s been working hard to make more classy additions to this cracking little machine…

Matt is a member of the Northampton Vespa and Lambretta scooter club and he’s been into the scootering scene since he was a young a Mod and used to hitch rides on his friend’s Lambretta Li. Matt’s always preferred classic vintage scooters and his first scooter was a Lambretta Series 2 TV175, but his most loved scooter has always been the Vespa GS and he set about getting the scooter he wanted for this project back in 2015.

Having looked around, Matt bought a Vespa GS3 ‘Augsburg’ from Austria, which he’s painstakingly transformed into his stunning ‘Baldet Deluxe’ Vespa Gran Sport VS4. Matt said: “The bodywork on the GS3 was perfect but the original paintwork left a lot to be desired.” Matt then set about developing the scooter to take it to a level beyond all expectations and in his quest to create something special Matt’s left no stone unturned.

Matt commissioned Matt Sutton of I-paint to complete the scooter’s paintwork. I asked Matt to explain the paint style he’d chosen. He said: “I love a good Baldet Arc-En-Ciel paint scheme on a GS150. If it’s done properly it enhances the curves and lines of the Gran Sport even more and this is exactly what I was wanting to achieve.”

While keeping strictly to the classic look Matt’s also worked hard to introduce significant engine upgrades. The upgrades Matt’s chosen have significantly improved the performance of the scooter, but don’t give anything away. Fuel is delivered by a Polini CP23 carburettor. Then a one-off Kingwelle 60mm long-stroke crank with a ported piston and 60mm CNC Nagy head take care of business. The Italian Vespazio GS Sport exhaust with a Rimini clover tail relieves unwanted gases, and sounds fantastic. To support the extra power Matt’s added a Pinasco light clutch and the original gearbox has been upgraded with Primary Pinasco 65t up-gearing. Matt explained the science behind the engine set-up he’d chosen: The weak areas of a GS are the 6v system and the UB23 carb. The 12v Vespatronic and Pinasco systems along with the Polini CP23 carb eliminate these weak areas and allow the scooter to realise its full potential.” Matt explained that to safeguard the extra performance he’s fitted a rear Pinasco adjustable shock absorber, which has significantly improved the scooter’s handling and has made the ride a lot smoother. Matt’s recently had the scooter dyno tested. He said: “During the dyno test the scooter gave out 12bhp, which is just about double the power of the standard unit. It also had an excellent torque graph and now it’s run-in it will do 65-70mph.”

The period accessories Matt’s chosen for the scooter are outstanding. There are Ardor legshield trims and fork link cover, an Ulma horncast, original re-chromed Italian rear GS rack, number plate embellisher, and also period rear crash bars. The hand-made Trezzi Dante GS seat from Italy in oxblood red is stunning and the most recent addition is the sleek eye-catching Pascoli petrol tank.
In order to officially affiliate the scooter with its Baldet roots and take the scooter to the next level, Matt wanted to add authentic period ‘Baldet’ plaques. Matt said: “This wasn’t easy. I’d been looking everywhere. I’d given up looking for an original, but luckily, and thanks to a friend in Athens they contacted me and sent me a vinyl ‘Baldet’ sticker, which was an exact match to the original ‘Baldet’ plaque’s size and detailing.

“When I got the sticker I contacted a local company who were able to make me a reproduction plaque to the exact original specifications, and this is the one which you see on the legshields.”

The overall build of the ‘Baldet Deluxe’ took 13 months. Matt sourced all the parts and commissioned Stephen Gregory of Vintage Motor Scooters to complete the engine build. Matt said: “I’d like to think Andre Baldet would have used all the performance parts I’ve chosen if they’d have been available at the time.” I asked Matt if there was anything further to add to the scooter. He said: “I’m currently hunting for a pair of 10in Ulma wheel discs and I also intend to add an original ‘Baldet Comet’ to the front mudguard, which will be another fitting tribute to the legacy of Andre Baldet.”

What is your favourite style of custom scooter: Not really into customs, but do like some of the vintage Vespa street style racers.
Funniest experience with a scooter: Unluckiest was when I took my VS5 GS150 to the Isle of Wight last year and as we were leaving to go on the main Sunday ride out my exhaust tail pipe decided to break away from its weld. So I was then designated cameraman on the back of my mate’s T5, while the GS got left behind.
Furthest you’ve ever ridden on a scooter: I.o.W.
Favourite Scootering Magazine feature: Man and Machine featured scoots.

Paintwork: The talented Matt Sutton of I-paint.
What was the hardest part of the project: The pilot jet being stuck solid in the new carb, which had to be machined out.
Do you have any advice or tech tips for anyone starting a project: If changing original engine spec especially to a Vespa classic do your research first. First, speack to the sellers and owners who already have it. And keep all the original parts you’ve taken off for another day or another chapter in its history.
Has the scooter won any show trophies: VMSC Extravaganza 2017: Best Vespa 1946-1970, Runner-up Vintage first time shown, Guernsey 2017: Best of Show, Tin Soldiers 2017: Best restored Vespa, Best Vintage Vespa.
Anyone you wish to thank: Stephen Gregory owner of VMS Ilkeston for the long-stroke conversion. Matt Sutton I-paint, Andreas Nagy and Ralph Bollag for specialist Vespa parts, Gary Lining for some excellent leads.

The scooter is named ‘Baldet Deluxe’ after the legendary French-born daredevil and entrepreneur Andre Baldet who lived in Matt’s home town of Northampton. Mr Baldet set up his business selling Vespas in Northampton, and that’s where it all started, at ‘Glanfield Baldet Scooters’, which was later known as Moto Baldet. Mr Baldet rapidly became the biggest Vespa dealer in the UK and was also famous for riding a Vespa up Mount Snowdon and riding a Vespa across Europe in ten days.