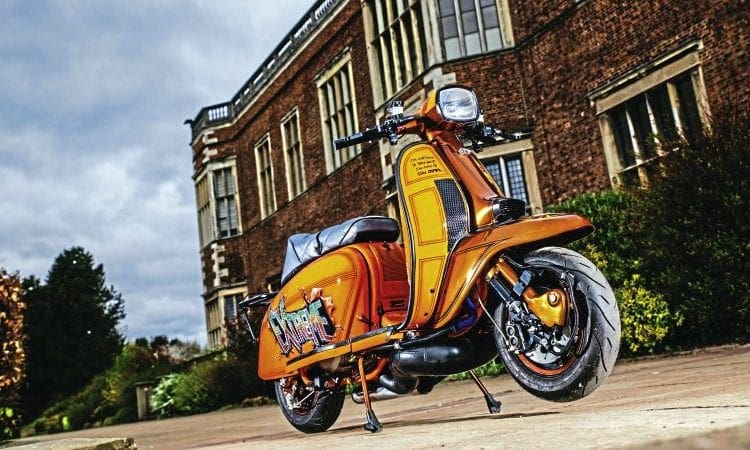 Trevor Harrison is no stranger to the scootering scene. The passion is in his veins and Trev’s antecedents speak for themselves.

Trev has been involved in the production of some fantastic custom scooters over the years. To mention just a few: Anthony Miller’s Lambretta, ‘Beyond Redemption’; Gary Carr’s Lambretta Vega, ‘Murder’; Roob Harker’s Lambretta, ‘Split Personality’; and Paul Muirhead’s Lambretta Chopper, ‘Dead Man’s Shoes.’ The list continues, and to add to Trev’s already impressive credentials he also still jointly holds the ACU official quarter-mile record. So what’s the point of all the preamble you may ask? Well, it’s simple. Trev now brings us his own custom KTM-inspired Street — Racer Lambretta, ‘Extreme’, which is a giant slayer, based on humble Lambretta underpinnings. As we alluded to earlier, Trev’s an experienced scooterist who has accumulated a vast amount of knowledge, connections and experience over the years, which he’s playing to his advantage. The experience Trev has gathered over the years has allowed him to choose a blend of technology, engineering and a team of specialists who’ve put together an absolutely awesome scooter, which in the hands of the inexperienced would come with a health warning. But in the hands of an experienced scooterist like Trev it makes you look like a champion. The scooter oozes a single-minded attitude to performance, style and technology.

‘Extreme’ is a fast scooter, and there’s a good reason for that as it’s based around a KTM engine. KTM has produced a solid reputation for building some of the best off-road bikes on the market with the engineering to suit. One of their most desirable engines is the KTM 300 EXC, which is the one Trev chose for his scooter. Hearing the engine crackle to life is amazing, it accelerates like *!!%** and seeing it in action makes you take a deep breath. The engine is light and powerful, and KTM claim the bike which it comes from has the best power-to-weight ratio in its class. So how did all this start? “A pal of mine, Jason Potter, from York, had a YZ250 engine fitted in his Lambretta. I had a Lambretta, which was running on a 240 engine and was kicking out around 30bhp,” Trev explained.

“To give Jason a run-for-his-money I decided I’d chase him on my scooter, but in doing so I put a hole in my piston! Of course this gave Jason the opportunity to start taking the Mickey, which motivated me to think: ‘I’ll show you, I’ll have the last laugh! And my ideas for ‘Extreme’ were born.”

The side panels are custom-made fiberglass items, which help with the power-to-weight ratio, and they’ve been filled over the kick-start cut-out area, which adds to the sleek lines of the scooter’s bodywork. Remove the side panels, stand back and take a look round the scooter. It’s an orchestra of technology. Starting from the front of the scooter the neat vents on the legshields allow the air-flow over the twin KTM water-cooling radiators. Also hidden behind the front mudguard are further cooling vents, which direct additional air-flow upwards over the radiators. On an extra cooling contingency Trev’s also drilled the tool box door to allow a further element of air-flow through the engine compartment and over the electrical engine management boxes.

The graphic on the legshield “I’m not here to take part. I’m here to take over…” is a famous phrase touted by the fighter Connor McGregor, which also confidently infers there’s a bit more going on with the scooter than meets the eye, and ‘CCC’ being the Roman numeral for 300 gives a subtle clue as to the power of the scooter. The Casa Lambretta double-disc brakes are sleek, sensible and practical and deliver the stopping power needed. The graphic on the front mudguard is the company brand badge of ‘Rekluse’ , which makes the automatic clutch Trev’s fitted to the bike. The clutch is supported by a ‘Kliktronic’ push-button gear changer, which boasts the slogan, ‘Simply the Quickest’. Just drop the throttle, touch the gear change switches and the scooter moves up or down through the gears. The small blue square display on the top of the radiator housing box shows the gear selected. It’s tantamount to Formula One technology and it’s exciting!

Gear changes are smooth and Trev explained the scientific thinking behind the technology. “I wanted it easy. I don’t want to be messing about, and gear changes are just a simple move of the thumb,” Trev laughed. “Simple, neat and effective.”

With all this technology going on Trev needs to keep abreast of the scooter’s overall performance. The SIP 140 speedo assists and includes a temperature gauge, which reads the temperature of the RK Tek billet cylinder head, which itself is also an advanced piece of engineering.

The higher Nickel content in the aluminium, which it’s made from, dissipates heat more effectively and has a much higher resistance to flexing. On top of the radiator housing box there is a coolant temperature gauge, which was imported from Australia. Just below the coolant temperature gauge is the original LCD KTM factory multi-function display panel, which delivers the overall engine management information.

As already outlined, the KTM engine is a fantastic piece of kit and it’s been integrated neatly to fit into the Lambretta frame. The result? The lines of the original Lambretta frame and bodywork have not been compromised. “Paul Goulthorpe completed all the frame modifications for me and he did a cracking job,” Trev explained. “He took it away on Friday and brought it back the following Monday! Paul built the swinging arm and modified the frame slightly to extend it at the rear behind the number plate, which was to allow for the free movement of the swinging arm without any complications.” The exhaust pipe is from the American tuning house Pro-Circuit and has been modified by Trev to sit neatly under the scooter. The rear wheel is a Peugeot Speed Fight item, which of course has been modified. Phil Varley of Torch Engineering took care of the detail and added a YZF125 cush-drive, which delivers a ‘smooth-as-silk’ power delivery as the clutch is released.

During an early dyno test the scooter was kicking out 48bhp and showed 85mph in fourth gear! Martin, at Chiselspeed, flattened the curve out, and it’s now a rideable 45bhp/33ft-lb torque. The performance of the scooter has been kept at a balanced maximum, and to allow for safer riding and better handling in poor weather there’s a horse power setting switch on the handlebars, which drops the scooter’s power to around 27hp.

“I’m an all-weather scooterist and because I’ve got a custom scooter it doesn’t mean to say it’s only going to be out in fair weather, so I wanted to make sure I was going to get the best performance possible no matter what the weather was doing,” Trev explained. “During the dyno testing we found that the scooter was running slightly hot, so we fitted a thermostat, which activates the twin radiator fans at a lower temperature and helps keep the power at an optimum level.”

The paintwork by Colin Fitzgerald is stunning and gives a look of real power and presence. Keeping with the look; the carbon fibre-effect seat, which was completed by Steve at Custom Belmont, has the ‘Extreme’ CCC graphic embroided on the rear, and the Scomadi rear light with LED lights is a neat and tidy addition. ‘Extreme’ has to be one of the most impressive scooters, which runs on a non-conventional engine set-up. The way it’s been developed and produced is a credit and an endorsement to Trev’s experience, and the team he’s chosen to support him with the build.

Before we closed the interview I asked Trev if there was anything else he was planning to add to the scooter. “Maybe a wicker basket for the rear?!” He laughed. This feature is dedicated to the memory of Trev’s close friend, Shaun Burns.

First rally or event: Scarborough 1977.
How did you get there: On the back of my mate’s scooter.
Favourite and worst rally/event: My favourite rallies are the LCGB rallies and the LCS rallies. My worst rally was Great Yarmouth.
What’s the furthest you’ve ever ridden on a scooter: Euro Rally, Sweden with the Trojan SC and The Orgasm Addicts.
What do you like about rallies/events: Love riding the scooter to the rallies and I enjoy meeting up with mates from all over the country, and of course the laughs and the ale!

What’s your favourite Scootering magazine feature: I enjoy reading about new products.
Your favourite custom/featured scooter of all time: Martin Scully’s ‘Italian Stallion’.
What’s the most useless part you’ve ever bought for one of your scooters: Exhaust attack valve.

What was the hardest part of the project: Fitting the swinging arm.
In hindsight, is there anything you would have done differently: Yes. I wouldn’t have done it at all. It’s been a rollercoaster ride of emotions!

Is there anyone you wish to thank: Paul Goulthorpe for everything and his time, Phil Varley for all his hard work making the cush drive, Dale Theaker of Anderson Motorsport for the alloy welding, Martin Cook of Chiselspeed for his expert knowledge on carb tuning and power valve modifications, Col at Garage Artworks for the paint and artwork, and finally, my partner, Dawn for travelling all the way to France with me to pick up the KTM and for the understanding of me always being in the garage!