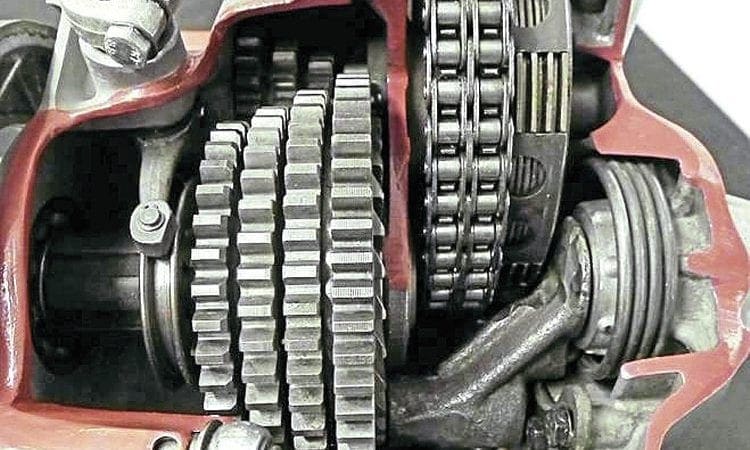 Scooter sounding like a bag of spanners on the way back from a rally? This month: fault diagnosis… without taking your Lambretta apart!

There are many occasions when there is a problem with your Lambretta that requires a strip down to see what is at fault. While this may be the case, it is still possible to diagnose a fault without taking too much apart. There are two big advantages to this. Firstly, you may be out on the road and a quick diagnosis will let you decide if it is safe to continue or recover the vehicle. Secondly, it can help you define what has failed to cause the problem in the first place.

A loose gearbox end plate gives the rider an unpleasant feeling of instability from the rear wheel. On long stretches of road it can give a weaving sensation and when cornering can cause exaggeration of the line you take as you approach a corner. At the same time if left unattended it will damage all the endplate studs causing quite often lengthy or irreparable damage to the casing itself. It is also possible it will wear the gearbox selector (sliding dog) or lay shaft as the gears will have excess movement. In extreme cases the clutch can be damaged as this can foul on the kick-start shaft.

A twisted crank is every Lambretta owner’s nightmare. This occurs when one of the crank webs moves on the crank pin causing the webs to go out of line. Initial symptoms are excessive vibration from the engine but more noticeably an uncomfortable oscillation that can usually be felt on your hands when holding the handlebars. Damage wise there are a whole host of problems from causing a seizure in the barrel to the head coming loose and blowing the head gasket. If it is a violent twist then quite often the engine will stop. If it a partial twist then problems will get progressively worse.

Initially very simple and quick. Remove the spark plug to stop resistance of the engine and kick the engine over while looking at the flywheel through the fan cowl. It should be clear to see if the flywheel is bobbing up and down. If it is then the crank webs have spun out of line. It may be the case that the webs are slightly out of line and it is not possible for you to see 100% if there is excessive movement of the flywheel. If that is the case remove the fan cowl and turn the engine over again. This will allow you to see if there is even the slightest amount of misalignment. If so, the top end will need stripping to sort the issue but at least you will have caught the problem early without doing too much damage.

A broken gear tooth initially is not a problem regarding damage. However if left untouched it can cause the other teeth around it to fail as they take the strain as the gear and cluster mesh. This can result in several teeth breaking at once. The result is ground up metal which gets into the oil. This will then get in to bearings and is called ‘infection’. Bearings will wear out in a matter of minutes causing a full strip and replacing of all bearings in the transmission area. There are two symptoms you may come across. Firstly a jump in the engine as you accelerate. This is more noticeable if you have lost a tooth of the cluster rather than one of a gear cog. Secondly you will hear a loud clicking sound from the gearbox area. While there are always sounds coming from the transmission on a Lambretta, this will be much louder and continuous as the gears are rotating. If depressing the clutch the sound stops as the gearbox is disengaged then this signals there may be a problem.

Remove the spark plug from the engine so there is no resistance from compression. Take your Lambretta out on to the drive or somewhere you can push it about 10 to 15 yards. Select first gear and push it along with the engine turning over, repeating the process in each gear. If there is a tooth broken off as you push it along you will feel the Lambretta jump forward as at that point there is a gap with no resistance to turning the engine over. Whichever gear you are in at the time, that will tell exactly which one is broken: a simplified and easy way to check for a broken gear tooth without taking the transmission apart.

The problem of a loose chain was covered several issues back but should be included just as a reminder. The main reason the chain is not checked enough is because it can’t be seen while at the same time to get it takes removal of several components and is a messy procedure as it sits in oil. Problems occur from eating through the tensioner to losing rollers which will wear the sprocket teeth. In extreme circumstances it has been known for the chain to be so slack that it has doubled up under the crown wheel breaking the crank case. While the only 100% guaranteed way to check is to take the side case off, there is a procedure that can help look for early problems.

The procedure is simple and done by taking an oil sample while at the same time checking the magnet of the drain plug. To do this all you need is an aerosol cap, preferably white as it will show anything up more easily, and a spare drain plug. Get the engine warm so the oil is thinner. Remove the drain plug and drain until the lid is about half full. Then put the spare drain plug back. You can now check the magnet of the original drain plug without losing oil. There will always be a bit of swarf on the magnet but what you are looking for is any evidence of a shell from one of the rollers on the chain. They will be a half circle about 6mm in diameter. If you find one then the chain needs replacing immediately. Now check the oil, again this could have a roller shell in it but what you are really looking for is the quality of the oil. If it is green or dark green then it is fine. If it is grey and has a grainy texture it suggests the chain has been rubbing on the casing picking up aluminium which is now in the oil. If this is the case then you know the chain must be slack and needs checking by removing the side case.

There is a difference between over adjusting the clutch and clutch wear. Over adjusting the clutch means it will start to slip as you accelerate, whereas clutch wear will give different problems. Clutch wear is usually highlighted by stepping or groves occurring where the clutch plate edges sit in the crown wheel and the clutch spider. Problems occur when the clutch is depressed and a plate gets stuck in one of these grooves making it unable to move. The stuck plate can then rub on a free plate next to it, causing a buildup of heat through friction. This can then lead to all the other plates getting hot, causing the clutch to burn out.

While there is no check as such for this problem certain ways in which the clutch behaves will suggest something is not as it should be. When starting the engine from cold all will seem well but quickly change after a few miles as the heat builds up. The first thing you will notice is the clutch will feel spongy and the normal biting point for moving away will not be in the same place. You may then notice slackness in your clutch lever as if it is under adjusted. These symptoms occur as the heated up clutch plates have no room to travel and the plates start pushing down on the clutch bell by themselves, hence the spongy and slack feeling in the clutch lever because the tension is lost in the cable. Finally as it gets worse you will start to encounter clutch drag or find it hard to select neutral at a junction for instance. These symptoms will persist every time you ride your Lambretta and suggest the clutch needs looking at.

Water contamination is not only a major problem but if left undetected the damage to the top end of your engine can be devastating. There are only two ways water can enter in to an engine, either through the petrol tank for instance left outside during the winter or in an extremely damp shed or through the carburettor during washing the bodywork. If water has got in the fuel system while it is under regular use you will know. The water will sit in the bottom of the float bowl and get sucked in to the main jet as you open the throttle. This will stop fuel getting through and cause the engine to cut out. However if you have put your Lambretta away for the winter and left it for months the problem goes undetected. If you wash it before mothballing it for the winter and some water has got in to the carburettor the problem can get worse so you need to check periodically.

This again is a simple procedure as oil and water don’t mix. Take a clean plastic bowl which is 100% dry and drain the bottom of your float bowl. In the case of the original Dellorto SH series carburettor you will need to remove the float bowl as there is no drain plug. If water is present you will clearly see the water as bubbles in the fuel, similar in resemblance to a greasy tray in dish water. You now need to determine if water has got in through the fuel tank or the carburettor. The only option is to start draining the fuel tank in to a large bowl. While the majority of the water bubbles will sit at the bottom of the petrol tank some smaller bubbles should be present after draining a litre or so of fuel. If this is the case you know that the tank was the source and will need thoroughly cleaning out. Having cleaned both the tank and the carburettor out you must then run the engine for a while to burn off any moisture that is present in the crank case. Failure to do so will allow rust to set in on the cylinder, bearings and crank itself. Another tip is to stir the fuel around the system during the winter. Though you may not be taking your Lambretta out, running the engine moves the fuel through the engine and burns off any traces of condensation or moisture that may have built up.

Remember these are purely the initial and helpful checks you can make to diagnose a problem that maybe present with your Lambretta engine. They are not ways of repairing the problem. Only by fully stripping the area in question can you repair the fault that has been diagnosed.