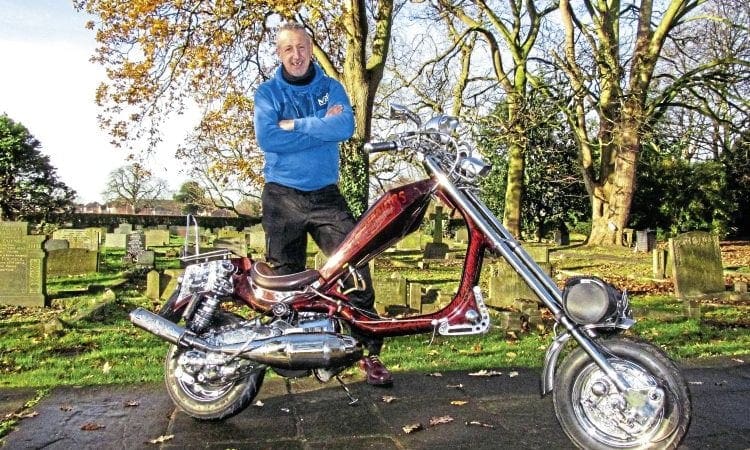 We first featured the awesome Lambretta chopper ‘Dream Warrior’ back in 2004 and since our previous coverage there’s been some significant developments, so we decided an update on this classic was in order…

Whatever your scooter style preferences, chopper-style scooters are a relevant contribution to the rich tapestry of our scene. Their owners are a special breed with an off the grid approach to scootering and they bring a lot to the table, which we should all thank them for.

Dream Warrior’s current owner, Brian Varey, is a self-confessed life-long chopper scooter enthusiast. Bri said: “I’d been out of the scootering scene for a while and I was lucky when my pat Macca, by chance, saw that Dream Warrior was up for sale. It’s all about the smoothness of the lines of a chopper, concealing the less easy-on-the-eye elements of a chopper build; and for me, Dream Warrior’s chopper lines are perfect. The look of the scooter is perfect and it was an opportunity I simply couldn’t afford to miss.”

I asked Bri how he’d come to be so passionate about chopper scooters. He said: “I got my first scooter when I was 14, it was an LD, which couldn’t go above 40mph, but that soon changed after a pal of mine explained that if I hacked off the legshields I’d get more speed out of it. With that in mind I wasted no time; I nipped home, chopped it down and it all started from there. I’ve always been into speed and performance, and it’s all about that whole grinder and tool box scenario.” I asked Bri what he meant by this, and with a grin on his face he said: “All I’ve ever needed in my toolbox is a grinder, a hammer and a condom. The reason being is that if you can’t grind it and beat it to death then… f”** it!”

Bri’s next chopped scooter started life a full-bodied Lambretta Starstream, which was promptly cut down. He then briefly owned a Vespa 125 to pass his test on and then purchased a P200E, which he also cut down and promptly sold on.

Bri’s explained that his early ‘chop projects’ were completed in a purpose built garage/games room at his mum’s house. Bri said: “The introduction of a snooker table into the games room area of the garage was a handy addition, as with a thick sheet of wood over it, it quickly became my scooter build table.”

Developing his fabrication skills, Bri then built and fabricated two chopper Lambrettas. The first of these was made from a full-bodied Jet 200, which had a self-built custom tank developed from Bri’s own templates. The second was another full-bodied Lambretta, which was also cut-down and given a Suzuki GSX tank. Bri said: “These experiences helped me develop my knowledge, skill and passion for chopper-scooters and were the foundations for my inspiration.”

When Bri got Dream Warrior it was running on a 200cc cast iron stage four tuned barrel, a four-stroke carb and a PM Tuning exhaust. The maximum power output was 7.76bhp, maximum torque was 8.6, and in Bri’s words in terms of performance “it wasn’t really doing it” for him. With this in mind, Bri commissioned Chiselspeed to rebuild the engine. Dream Warrior now runs on a tuned TS1-230 kit, which has a profiled head and matching barrel. It has a 30mm PHBH Dellorto carb (jet guide: 142 main jet, X7 needle (second clip), AV268 atomiser, 40 slide) and a LTH left-hand inlet manifold. The crank has a Yamaha con-rod, the gearbox has a new GP 200 gear cluster with a LTH seven plate-clutch, and an ADS5 exhaust supports the whole setup. A recent Dyno test shows that Dream Warrior now develops a maximum power output of 25.72bhp and a maximum torque of 16.87lb-ft! With all that said, and at the risk of sounding as though I was missing the point, I asked Bri why the left-hand side inlet manifold? Bri said: “It was simply for cosmetic reasons, as I said earlier; for me, it’s all about keeping the lines of the scooter. In my opinion the factory TS1 right-hand side inlet manifold doesn’t support the look of the scooter but the left-hand side manifold balances the overall appearance of the bike.”

Dream Warrior has a five-litre fuel tank and again while trying not to sound defeatist; I asked Bri, with all this increased performance, how does he intend to manage the increased fuel consumption?

Bri said: “I’m considering the possibility of lifting the angle of Dream Warrior’s tank and adding a flat top, which would add approximately one litre of fuel space. Also, if I drop the petrol taps to the bottom of the tank this will also add extra fuel capacity. Other possible tank configurations that I’m thinking of are having a teardrop or cobra’s head shaped tank. The advantages of these shapes would be that looking at the bike from the front angle the extra width of the tank would enhance the appearance and presence of the bike without compromising the overall lines of the bike.”

Then, jokingly Bri said: “Anyway, for the time being the five-litre fuel tank suits me down to the ground because with the upgraded engine I have to stop all the time, which lets me get off the bike, have a fag and have a move round to ease the pain in my backside!”

Since purchasing Dream Warrior Bri explained that he’s encountered some issues with the electrics. The first one was when the scooter started cutting out and the culprit was initially thought to be a recently fitted electric speedo. However, on closer inspection the problem was discovered and it was found to be as a result of the wires surrounding the cdi unit and the rectifier arcing on the frame, which caused a small fire! The second problem was when the stator plate fell to pieces. Bri said: “I’d been to the Bridlington Rally and on my way back when the scooter cut out and there was no spark. The following day I got the flywheel off and everything fell out of the engine!”

Bri predicts that the upgrades he has planned for Dream Warrior will take about 12 months. Bri said: “The engine is done; and now the rest of the scooter’s going to get the full treatment. I’ve already contacted Dave Dickinson who’ll upgrade his original paintwork. In the meantime, while all this is going on I’m going to have all the existing chrome parts re-chromed and I also may add some brass or gold plating to increase the overall effect. I intend to make a home-made wiring loom, which’ll only have the wires I need! And the seat is going to be upgraded, to make it a lot easier on my backside! Dream Warrior’s going to be an absolute show-stopper!”

Name: Brian Varey
Job: Tattoo artist.
Scooter club & town: Independent rider.How and when did you first become interested in scooters: Around 1979 when I was 14 years old.What was your first scooter: A brown Lambretta LD125.
First rally or event: 1979/1980 Scarborough.
Favourite and worst rally/event: Worst: IOW (1983/1984) – we got deported off the Island and we ended up spending the IOW rally in Bournemouth! Favourite – Great Yarmouth (1984/1985).

What is your funniest experience with a scooter: Morecambe. As you came into the campsite there was a hole in the road, which had been dug out for the water for the campsite. Even though it was cordoned off my mate ‘Shorty’ managed not to see it and rode straight into it! On the way back, there was some maintenance on a slip-road section of the road. My brother Mick, who was riding his PX, didn’t see it and a couple of seconds later he was passing me 3ft lower than the road level!
What’s the furthest you’ve ever ridden on a scooter: Fort William on a chopper.
What do you like about rallies/events: Custom shows, beer, the camaraderie, ride-outs and the camping.
What do you dislike about rallies/events: I don’t like the non-camping rallies. In the 80s every scooter rally had a campsite and that’s just what I like!
Your favourite custom scooter of all time: ‘Warlord’ and ‘Sheer Havoc’ – Lambretta chops.

Is the scooter reliable: It is now!
Paintwork & murals done, and who by: Dave Dickinson (Commissioned by previous owner).
Is there any engraving done, and who by: Don Blocksidge (Commissioned by previous owner).
Is there anything still to add to the scoot: Possible relocation of the footpegs to give an urban riding position and an open road position (not everybody’s 6ft 2in!).
Is there anyone you wish to thank: Macca for letting me know that Dream Warrior was up for sale. Mike Kong for parting company with it. Alison for being very understanding.

Bri is a self-taught tattoo artist and developed his skills from his natural passion for artwork. In 2008 Bri opened his own tattoo shop in his local town, Selby.

Previously Bri’s wife Alison wasn’t into scootering but when Bri bought Dream Warrior he asked her how she would feel about riding pillion on the scooter with him to rallies. Bri said: “Because Alison used to be a hairdresser she’s always been conscious about her hair and initially she wasn’t too keen on the idea. In words of encouragement I told her that she shouldn’t worry too much about her hair because all the lasses at the scooter rallies tend to end up having the same sort of hairstyles anyway! I eventually got her to have a ride on the back of Dream Warrior and she loved it. It was then, at this point that I realised that it might not have been one of my best ideas because six months later we ended up buying Alison an AF Rayspeed GP Lambretta! But who knows one day she might also end up riding a chopper!”