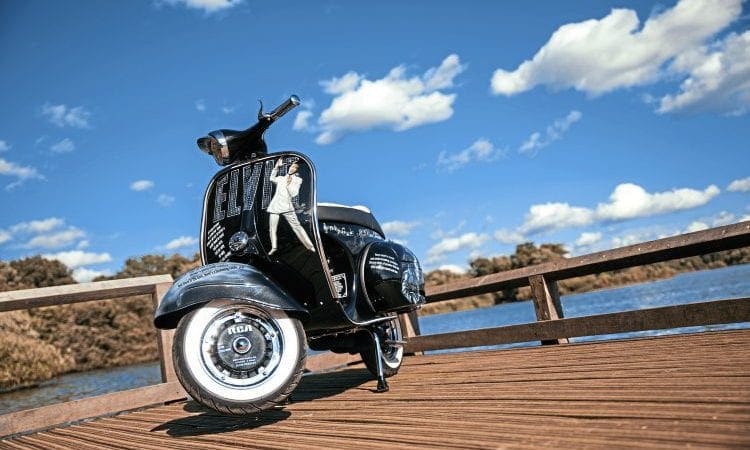 Inspiration to build a custom scooter can come from many sources. Performing as an Elvis tribute act is just one of them…

In the public imagination the lines are very clear, Mod or rocker. You can be either but not both. The truth of course is far more complex and when a teenage Ric Martin fell in love with scooters he was already an established fan of the one and only Elvis Aaron Presley. “I suppose the 1980s could have been a difficult time,” he laughed, “but fortunately rockabilly was fully embraced by the new breed of scooterists and my quiff didn’t even raise an eyebrow!”

Rebel with a cause

Unlikely as it may seem, Elvis’s music was very in keeping with that 1980s spirit. “People tend to think of Elvis as a pop singer,” began Ric, “in fact he was a very religious man with a keen social conscience. Some of his lyrics were very challenging by standards of the time.” Anyone in doubt of this should take time to study the lyrics of ‘In The Ghetto’, the story of a boy born to a mother who has more children than she can feed. The boy survives by entering a life of crime, eventually being shot dead just as his own child is born. The song’s narrative emphasises an inescapable cycle of poverty, violence and unfulfilled lives. It’s as relevant today as when Elvis recorded it in 1969.

In and around his home town of Fleet, Ric has built up quite a reputation for his performances as Elvis, though he’s keen to point out that he’s not an impersonator. “My show is more of cabaret experience,” he said, “people seem to enjoy it and I’m pleased to say that over the years I’ve raised a lot of money for local charities.”

Starting with a Vespa 50 Special, Ric has owned many scooters over the years but has a soft spot for Vespas produced in the late 1950s and early 1960s. The base for this project was a rather unloved VNB that had passed through various hands before Ric purchased it in a collection of cardboard boxes. “I’d always wanted a custom scooter but life always got in the way,” he explained. “In 2015 I had a heart attack, definitely a sign that I needed to take things steady. One thing that stopped was the Elvis show and that left a big hole in my life. The VBB was a way of occupying myself and making something positive of the experience.”

Fortunately despite years of neglect the VBB was essentially sound. The project’s major challenge was planning everything so that the build could proceed without any major delays. Having selected Whitby based Lee Hopkinson to apply the paint, Ric and his wife headed north. Over a very enjoyable weekend in the town Ric and Lee thrashed out the scheme. Even though Elvis was one of the most photographed stars in history, Ric was never in doubt as to which period should be represented. “I was born in 1968, during the period Elvis was returning to live performances having become disillusioned with his role in motion pictures. I’ve always felt an affinity with that part of his career and it was an obvious choice to use images from the ‘Comeback Special’ concert. The lyrics reproduced on the panels and the scooter’s name are from ‘If I Can Dream’, a song released during the month I was born and particularly powerful, being dedicated to Martin Luther King Jnr’s famous civil rights speech.”

Although the scooter carries a powerful message it’s also full of fun touches. The rear light unit is particularly noticeable, being converted from a microphone once used by Ric in his cabaret act. For the sake of practicality the VBB’s original engine has been replaced with a standard PX unit and a 10in wheel conversion completes its rehabilitation for modern road use. These modifications, together with the final ‘scratch free’ build were carried out by the capable hands of Doug Western at Target Scooters in Hungerford.

Thankfully Ric’s now on the road to recovery and the story turns full circle, for the VBB has inspired him to begin performing once again. For many, Elvis and Vespas may be unlikely bedfellows but to Ric they truly are an inspiration.

Scooter name: If I Can Dream.
Model: Vespa VBB 1961.
Time to build: Three years with most of the work by Target Scooters.
Engine: Standard PX150 with SIP Road Twin exhaust.
Paint: Base by Rehab custom, murals by Lee Hopkinson.
Anything else to add: Seat by Slimline Scooters.
Thank you very much: Doug Western of Target Scooters, Nick at Rehab custom and Lee Hopkinson for paint. Most of all to my wife and kids for giving me freedom to build this scooter.

MASTERPIECE IN THE MAKING

There must be something in the water around Whitby that breeds airbrush artists of note.

Although he may not be so well known as near neighbours Dave Dickinson and Col Fitzgerald, local lad Lee Hopkinson is rapidly building a solid reputation for well executed custom work. Having established himself in the tattoo industry, Lee switched to airbrush work around six years ago. Since then he’s produced several show-winning machines, notably ‘Comic Genius’, the Rik Mayall tribute Scomadi. With a distinctive style that sits between the graffiti-based output of artists such as Gatch and photo realism, Lee’s work has found an appreciative audience among scooterists from across the UK and into Europe. Despite this success Lee has avoided the temptation of scooter ownership. “If I bought a scooter I’d drive myself insane,” he laughed. “They’re fantastic to work on but I’ve so many schemes in my head that I’d be changing it every week.” As a newcomer to scooters it’s also interesting to hear which model he’d buy if he ran out of self-restraint: “It’d have to be a Scomadi. Their big, uninterrupted panels are the perfect canvas for an artist.”

For decades Vespa’s VBB has been consigned to the margins of scootering. With the VBA it formed the backbone of both commuting and club scootering in the 1950s and 1960s but lacked the glamour of the contemporary GS. With the introduction of the SS, Rally and P-range it fell from favour and our collective memory. More recently its rounded 50’s lines and accessible prices have seen its popularity rise, particularly as it’s a fairly straightforward process to fit a P-range engine. As with all classics there are a finite number of these machines available and anyone hankering for a touch of 1950s style should act sooner rather than later as prices for good examples are steadily rising.