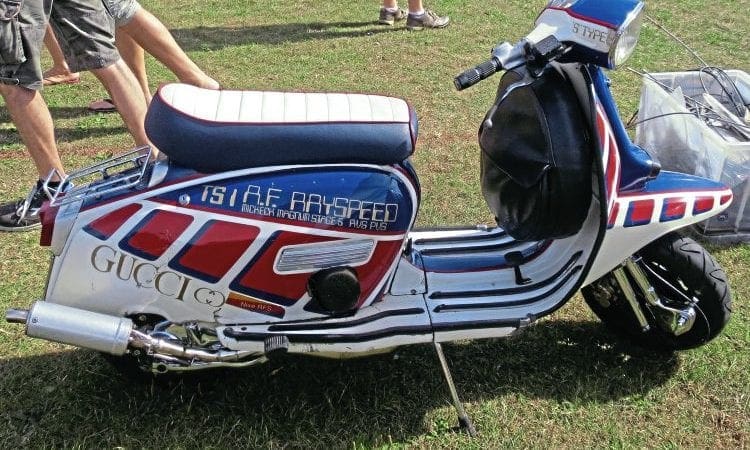 Lads in snide Gucci sweaters and chicks riding on the back of Yamaha Genesis FZR1000s. If those two images don’t scream 80s, nothing does…

Welcome to another blast down memory lane, well in this case the A-roads. This month a stunning street-racer from Aylesbury comes under the spotlight. Ever since people have been personalising their rides, street-racers have been possibly the most common form of transformation seen at rallies and custom shows. Paint and subject inspiration can come from a multitude of arenas, from condoms to chocolate! Now, for me, Lambrettas are the height of Italian chic, so what more apt as a base subject than another romantic big hitter, the world-renowned fashion house Gucci.

By the late 80s it became possible to buy a brand new scooter from a dealer and have it pre-customised to your requirements, and this is exactly what happened on this occasion. Original builder Darren King (who also brought us One Track Mind) took his idea to AF Rayspeed in 1988. After purchasing a brand new Indian GP200 he got them to apply his concept. His brother had a Yamaha Genesis FZR1000 and he liked the livery so much he redesigned the patriotic block-work to fit a Lambretta shell. Sadly soon after its debut it was involved in an accident at Margate scooter rally. However this did not deter Darren and he soon had it back to ‘full health’ after a visit to scooter paint specialist Ian King (no relation) at JGS Customising, who tweaked the design to what you now see here. It was sold on in 1993 and finally ended up in the hands of latest owner Martin 12 years ago.
Dave O

Paint (artist): JGS Customising Aylesbury.
Engine: Had lots of different set ups, currently a very poorly TS1 230…
Chrome: Bits and pieces.
Are you the original owner or when did you become the owner? Built by a lad from Aylesbury, I got hold of it in around 2005.

When you got the scooter what condition was it in: Complete but not on the road.
What have you done to it since owning it or what do you plan to do: A few different engine set ups, different brake and fork set ups, different seats, just general odds and sods within the confines of the original body and paint. Plan to keep using it without restoring, and keep attending various piss ups (scooter rallies), and using it as an excuse to meet up with my mates.
Do you still do rallies: Yes, as many as possible.

Funny story: So many good times, one that springs to mind was at Scarborough in the late 80s. Myself and a couple of mates had just managed to get some take-outs from the pub when it closed at 11pm. Anyhow, I went outside to wait for them with our stash of booze, somehow they got side-tracked and ended up chatting up some local birds! Bored, I started drinking what we had and after waiting ages (probably 10 minutes max) decided to make my own way back to the campsite. Thanks to a combination of a day on the beer, a bad sense of direction and the remainder of the take-out I ended up getting lost, including a stumble round the local graveyard and didn’t get back to the tents until the dawn chorus. Where I found my mates had been back for ages and had been asleep for hours! Thanks for the night-cap boys!

Favourite event ever: All of them.
Favourite custom scooter ever: Anything ridden. My mate Mark Reeves’ ‘The Torch’ is a prime example.
Favourite dealer: In the past AF Rayspeed and MB, these days whoever offers the best deal!
Anything else you’d like to add or think is relevant: Scooter is starting to get a bit tatty now after 10 plus years of using it as a rally hack. I fully expect it to get tattier over the next few years.