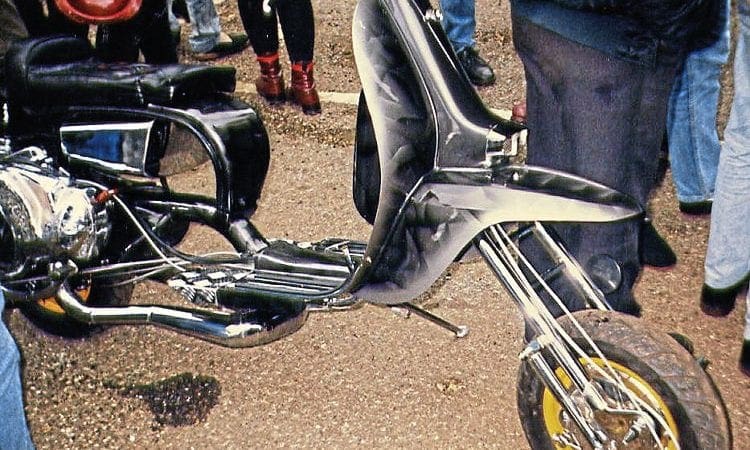 You may have seen the neat little VBB racer article earlier in this edition of the mag. That scooter wasn’t built by owner Martin Pope… but this one was. Confused? Read on…

I first came across this scooter at a mid-80s Morecambe national. At the time I was very Lambretta biased, but for a change the ‘matching’ of the two favoured marques actually looked comfortable and well done. I liked it, much to my own surprise.

Builder Martin Pope from Leicester, had finally done something many previously tried to do, but failed. He had given us a very well-engineered Vesbretta and it came under the name… The Fury.

Fast-forward to today, and the scooter is in the hands of new owner Dean Hoad, but he wasn’t aware of its previous show history, and only became aware when he posted pictures of his latest build on Facebook – a beaten up scooter bought as a box of bits! Eagled eyed keyboard warriors were straight on the case, and instantly noticed the resemblance… and so another old custom was re-found and soon will be resurrected!

Name: Dean ‘Deano’ Hoad – named after the dinosaur from the Flintstones. My dad named me it – why, I don’t know!
Hometown: I have lived in Horsham West Sussex all my life.

Scooter club: I ride solo, but for many years have met up with other solo riders from around the area and we go under the name ‘The Two Stroke Wankers!..lol. I was on the way to Mersea scooter rally a number of years ago with my mates Ian and Dave. Ian was on his Lambretta, and we were on GTSs. At one petrol stop he had problems starting it, so jokingly I turned to Dave and said ‘f**king two-stroke wanker’ and the group name stuck!

Scooter name: Originally called ‘The Fury, at the moment ‘Little Horror’.
Year originally built: 1986.
Frame/engine: Lambretta LI S3 cutdown/P2 engine.
Fabrication: Martin Pope.
How did you come upon this scooter: I got the chop last February; saw it on a scooter for sale site. It was going very cheap, why not I thought! I love Vesbrettas and have owned lots of chops over the years; this to me stood out. I didn’t know anything about its custom history, only found out about The Fury when I posted pics up of it on social media.

What condition was it in: Pretty rough, it was in bits and the engine was shot.
What have you had done to it or plan to do since owning: It’s now mid-rebuild and has a new engine going in. The paint will stay as is for now…
Do you still do rallies: I do about five or six rallies a year now, working as a lorry driver and having grandkids I don’t get much time. I still enjoy riding scooters when I can, it’s nice just to get out and about.
What other scooters do you own: Apart from this chop I own a PX200, T5 MKI, another P2 chop and a GTS for long journeys.

Riding to Margate many moons ago… It was getting dark and as barely 16-year-old kids we rode past this pub full of hairy bikers! Rivalry and testosterone saw us sticking our fingers up, and giving the odd hand gesture before making our retreat. A few miles down the road I looked back to see lots and lots of lights coming up fast behind us.

With the fear of God I gave my poor old PK50 the thrashing of its life, I look again and they are getting closer!! just prayed that I would not crash or the scooter seize up on me. Then I see lights ahead and the police check point across the road! We were going that ‘fast’ that even though the police tried to stop us we steered round them and carried on; we were not stopping for anyone that night.

We later found out it was not the bikers that were behind us, it was another bunch of scooters! Lesson learnt that night; never stick your fingers up to bikers especially when riding a standard PK50!

Favourite event ever: The best scooter rally by far for me is the IOW. I must like it – I’ve attended for the past 32 years!
Favourite custom scooter ever: My all-time custom is Steve Maw’s chop Illusion – nice chop and top man.
Anything else you’d like to add or think is relevant: I’d like to say a big thank you to all the 2TW and especially Ken for keeping my scootering life enjoyable.