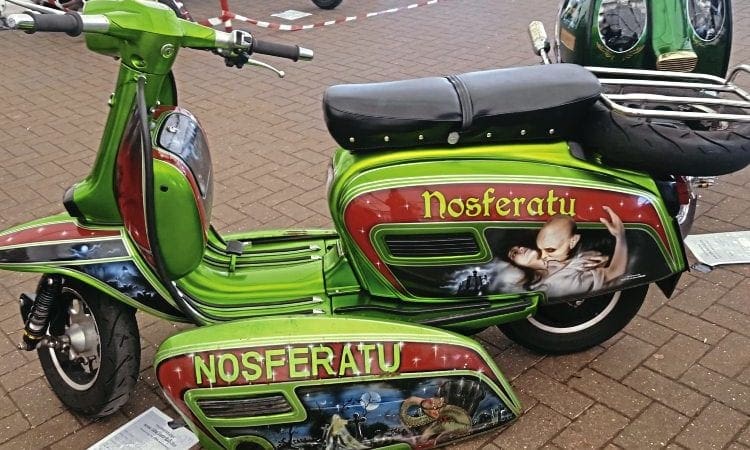 Most people associate the Nosferatu name with Mike Davis’s blue Vespa cutdown of 1986 (see 27 November 2019 post). However that wasn’t the first scooter to be adorned in blood and to go under this title…

Based on the 1920s German Dracula-inspired silent movie, you know the one with the creepy skinhead Count Orlok, I first saw this scooter right at the start of my scootering journey in the mid-80s. At a time when most people and their scooters were going through the Mod/scooterboy transformation it stood out because of its livid paint and uncluttered lines, it was in fact very ahead of its time.

Like the theme it has kept appearing throughout the last 30 odd years, but I never got to speak to the owner. Then while watching the Mersea fun and games I was sat next to a couple who I remembered from various shows and rallies over the years. We got talking and yes I found that they had owned and ridden Nosferatu since the 80s and after having it re-‘vamped’ last year they were still clocking up good miles.
Dave O

How long have you owned it and how did it come into your possession: My brother Gary got it unfinished in 1986 and had it for a couple of years. I constantly pestered him and finally got it in 1988 and have owned it ever since.
What have you had done to it since owning: Ridden it all over the country and spent a small fortune on revamping it for this season.
Any plans for the future: Just to ride and enjoy it.
Do you still do rallies: Yes, as much as I can. These days I prefer the LCGB events to National rallies.
What other scooters do you own: A few! Three GPs, one SX 200, LI Sl, LI S2, LI S3, Jet 200, Vega, J50 and J125.

Funny scootering story: Going back to the 90s. The lad who built my scooter Nosferatu, Jason Potter from Pat-speed, decided to stitch me up over several months. I’d have delivery pizzas turning up, taxis coming to my house which I never ordered, and probably the cleverest an advert in Tescos a split-screen camper van for sale for just £350 – with my mobile number, I had numerous calls on that one I can tell you! So I thought, how can I get my revenge?

I decided to put an advert in Scootering For Sales for all Jason’s scooters, ten tea-chests full of Lambretta parts and a three-wheel Lambretta with wicker seat all going mega cheap as I was emigrating. I gave his number but said please ring between 11pm and 5am as I work these hours!

Months later we were all in the pub at a scooter rally and the subject came up about Jason selling all his bikes. He said he had received hundreds of phone calls for over nine weeks, every night, from all over Europe, America even Australia!

One poor lad EVEN set off from London to York to find out it was just a wind up – I do apologise to him! The best part was Jason blamed everybody but me and poor Tat from Pickering who became the prime suspect, got the VW camper treatment for months! A few years ago he finally found out it was me, but to me that’s what scootering is all about, if you can’t take piss out of your mates, who can you? Even last week he was getting revenge. After having some tuning work done I open up my tool box on the way to the South Lakes rally and find it full porn videos and mags! (Editor’s note: Course they weren’t yours Dave, course they weren’t…lol)

Favourite event: Coast to Coast LCGB rally
Favourite custom style: Standard restorations and untouched originals.
Favourite dealer: Jase at Patspeed, Wigginton.
Anything else you’d like to add: This year for my honeymoon with my wife Hayley we did John O’Groats to Land End on Nosferatu. It was for the SANDS charity after the Kelso rally and we raised £1857. A total of 1573 miles in four days without problems!