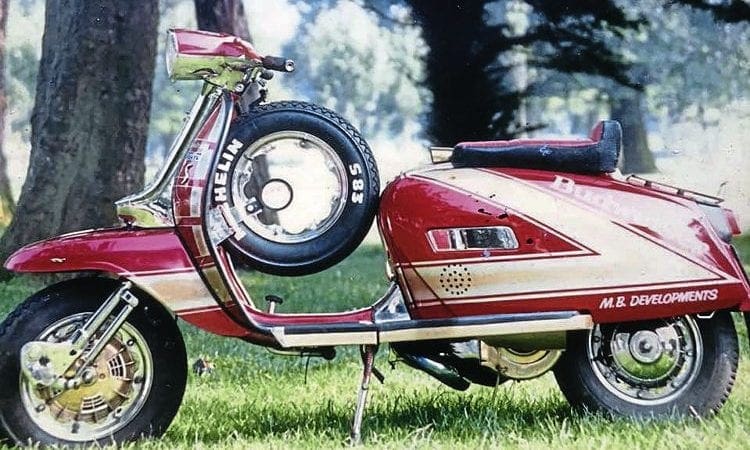 Another 80s classic comes out of hibernation, untouched after being hidden away for the past 19 years. And it’s soon to be ripping up the road again…

I’ve always had a bit of a soft spot for the street-racer style. Functionality and looks – what else could you wish for? Now although the beauty you see here has been stored away for almost two decades, it has quite an interesting story. It first became ‘Budweiser’ when a young Rog ‘Fascination’ Godley bought a two-owner red GP with brass/copper plating around 1979. After a few years and a trade with Broady for a bit of tuning, he along with a mate (but no masks or booth) carried out the first Budweiser finish. It was eventually sold on and made its way down to sunny Suffolk. Here a new owner, Jason Cross, decided it was time for a colour change and the blue version was created. Looking at it though, it must have just had the under panels masked up as the tube frame still keeps the original red! Next it came into the hands of the Homes – Andy and Ashley Horne.

They were like the Posh and Becks of early 90s scootering. Andy worked with and for several of the 80s big hitters including Beedspeed, Aerographics etc. and was well known for his previous builds (Mytho Poeikon/ Rock Oil/Competition Ain’t Nothing), and so with a nice painted frame as a basis he built his wife Ashley an engine that could match up to the outside sparkle. Eventually it ended up in the hands of now owner Ian Barker who used it for a few seasons before parking it up and covering it over. That is, until now!
Dave O

Scooter name: Budweiser.
Year originally built: It’s a 1969 GP, the 22/0 frame number would suggest a 150. It became the red Budweiser in the early 80s and then was reworked blue in the 90s.

Paintwork: In red Budweiser theme by Rog Godley and Mark Barton. It was sprayed blue candy over silver for a lad called Jason Cross by AF Rayspeed before being bought by Ashley Horne who had her name added by Ty at Pageant.

Are you the original owner or when did you become the owner: No bought it as you see in the pictures from the Hornes’ October 30, 1995.
When you got the scooter what condition was it in: Mint condition, it had been well looked after and maintained. Although it has been stored for many years I try to start it up at least once a month. Amazingly after a couple of kicks it always fires into action!

What have you had done to it or plan to do since owning: Nothing as yet, it was stored up 19 years ago! However I do plan to get it back on the road this season so keep an eye out for it.
Do you still do rallies: Not for a long time, last scooter rally I attended was ‘Skegness Sticky Rock 2005’ on a Vespa P200E.

Funny stories from early rallies: I have three: I was coming back from Whitby and I pulled in to a petrol station to fill up and these bikers pulled in behind me. They parked up their bikes, looked straight at me and started walking over. Black leathers, big boots with white socks rolled over, I thought here we go, I’m going to get a right kicking! But once over they started admiring my Lambretta and shook my hand. They told me that they were all originally Mods back in the 60s and all owned Lambrettas. They still had their old parkas hanging up in wardrobes, and said even though they’ve moved on to bigger bikes they still love Lambrettas! Another time, leaving a petrol station on my way to a rally, I misplaced my rucksack. Once I realised I turned round and went back. On arrival I went to pick it up and a voice came over the loudspeaker saying ‘Leave the rucksack alone, the police have been called’. B******* I thought, I grabbed it and shot off into the sunset! Finally, on the way to another rally, one of my fellow riders had a blowout. I was travelling behind him and couldn’t wait to get back to him to utter the famous words ‘It looked good from back there’, the others said, trust you to get that particular remark in. He was okay though just some damaged pride!