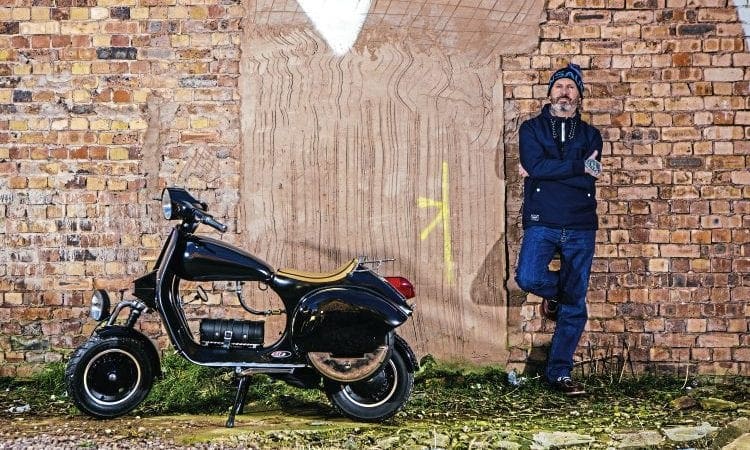 Every custom scooter has its own creation story, but I don’t think many have a story like this. It starts over a few drinks, as many do, but, unlike most, it involves an act of generosity rather than some scribbles on a beer mat. 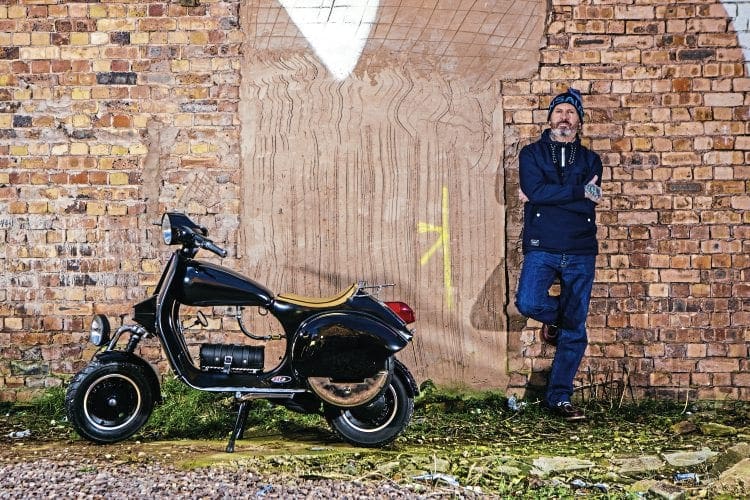 The old-school approach… Simon Rickers is the owner of this fine looking chop, but without the kindness of a good mate, Alan Lamb, it wouldn’t have come to pass. The pair were in the pub one night – no doubt a couple of small sherries had been drained by this point – and they were having one of those ‘I’d love to enter a scooter into the Brid show’ conversations when Alan looked at Simon and told him that if he meant it, he could have his Vespa chop frame. 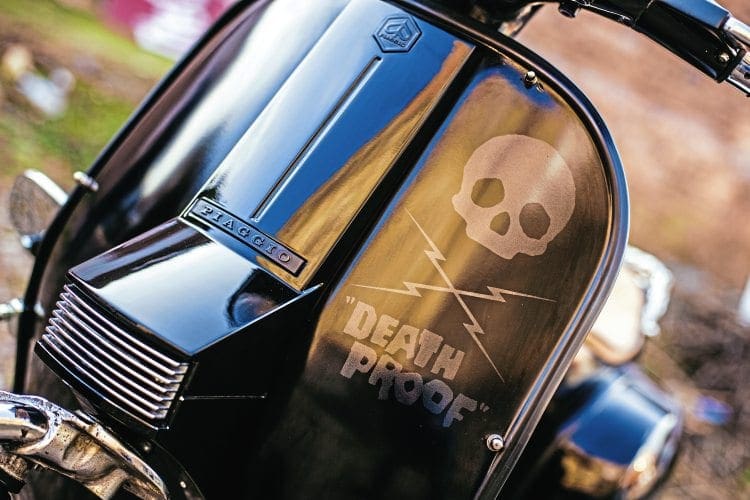 Now I’m sure we’ve had similar conversations when in the arms of Bacchus, and come daylight the promises are forgotten, but not so here. A quick phone call along the lines of ‘can you get it in the back of your car?’ and Simon was round like a flash. Squeezing the frame in was straightforward, but the generosity of Alan became almost embarrassing: “You’ll need these… and these… don’t forget this… oh, and there’s this…” A proper old-school scooterboy approach. No “well, you know what these go for”, just “take what you’ll need and don’t worry about it”. 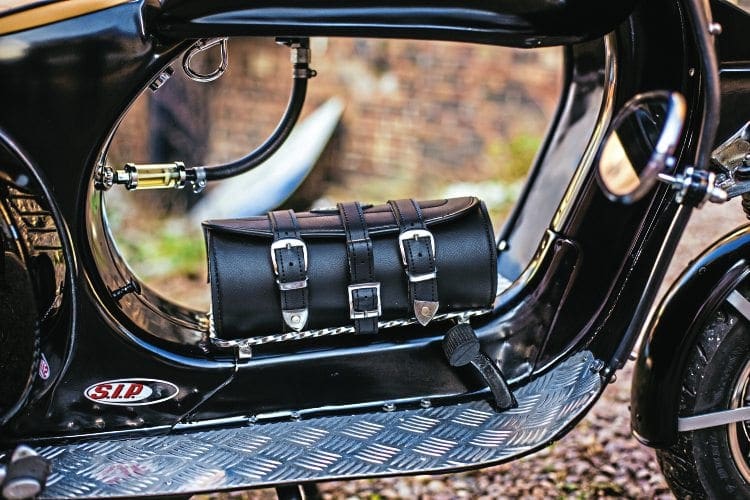 The frame that was donated was one that had been picked up with the idea that it would make a decent chop for Alan, but on collection it was a bit of disappointment and was consigned to that dark corner of the garage that many of us have for things to come back to later. As it had sat there for a little while without any progress, he offered it on the understanding that it would be built and entered into the custom show.

From concept to reality

The idea for basing the scooter on the film Death Proof was already kicking around in Simon’s head. This cult Tarantino film is one of his favourites, and he already had several ideas in his head as to what he wanted. Needless to say, a visit to a local artist Lee Myatt convinced him that while his theme was a good one, the actual execution could be much better. Having convinced Simon that a satin black base with gloss black detailsing would give a great ‘ghosting’ effect, it was agreed that the artist would be given free rein. Looking at the finished articles, I can only back that decision to the hilt. 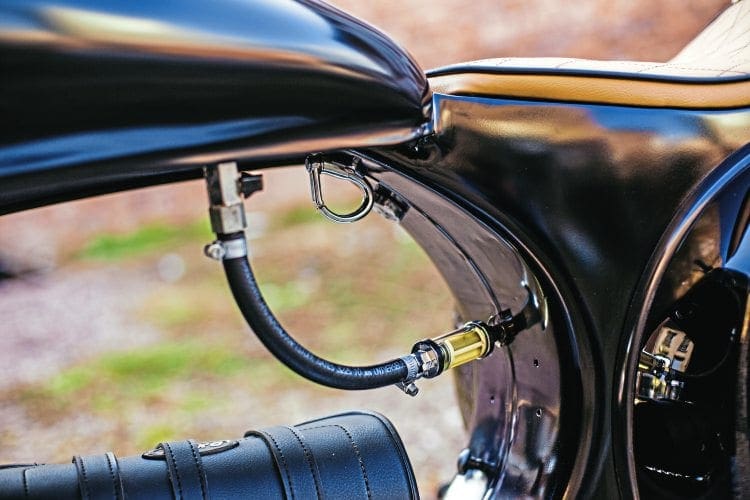 An engine was obviously high on the shopping list and a P125 lump was sourced as ‘complete’. ‘Complete, but missing a clutch’ would have been how Simon would have described it to the sell if he could have found him, but, oddly, he seems to have vanished…

The engine was thrown together using reasonably priced components – a DR180 isn’t the usual kit on a custom, with most people heading towards the exotic end of things, but as the scooter was being built on a budget, that’s what was bought! Similarly, a SIP pipe is an unusual choice of exhaust for a custom, but Simon was more concerned with rideability than out and out performance, and a cruising speed of 60mph suits him fine, having a GTS for those trips that require longer legs. 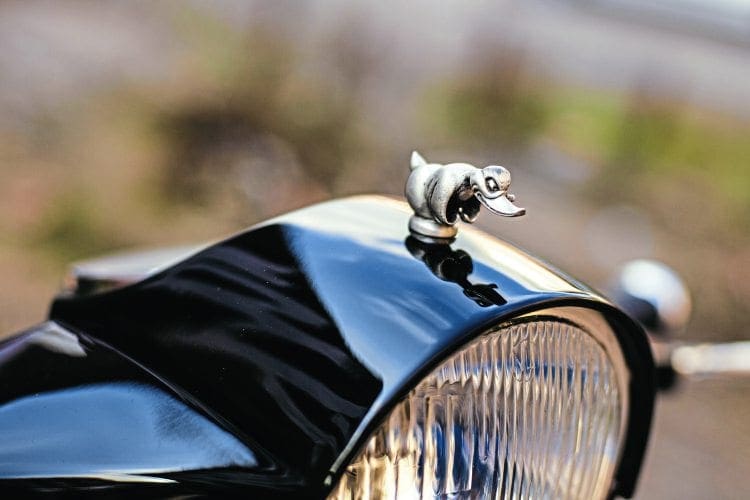 Being a scooter that has been built to a price, and given the subject matter, the detailing was done to a minimum. A pair of small racks and floor rails made from twisted stainless were originally fitted, but the runner strips soon went as they were unsuitable for day-to-day scootering, it being a ridden scooter and not a show pony.

The one item that does stand out is the rubber duck on the handlebars. In the original film, Tarantino wanted to give a nod to the classic film Convoy and got the manufacturer of the one shown on Kris Kristofferson’s truck to make a scaled down version for the Death Proof car. Simon found the manufacturer and got it to make an even smaller one for his scooter. The cost? About £30, delivered. Bargain! Speaking of which, did the scooter ever get shown at Bridlington? Of course it did. Although it didn’t win anything, Simon was proud just to have shown it, and to have had positive feedback on its showing. 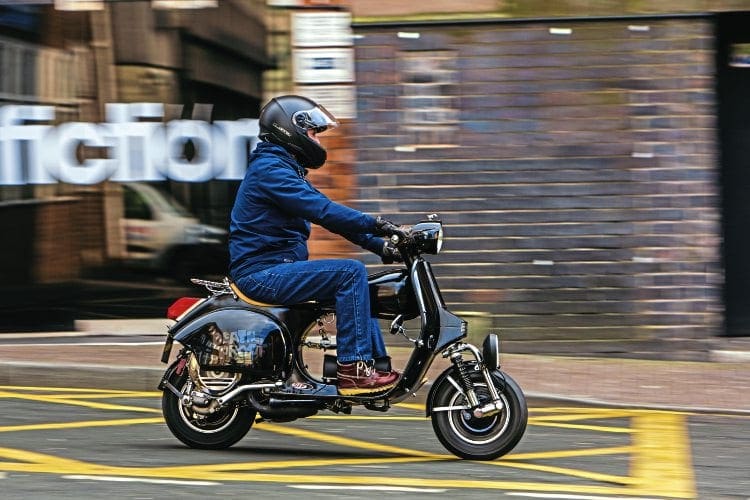 But as he says: “Even achieving the dream of showing it wouldn’t have been possible without Andy and his huge act of generosity, something I couldn’t have expected.” This feature in Scootering is another target met for Simon, and I’m pretty sure that some beer is owed to Andy now…

Scooter club & town: Telford Tigers SC, back in the day, I’m not in a club at present.

First interest in scooters: 1979 — I used to get a lift to work on the back of an old Li150, then seeing the Vespa on the inner sleeve of All Mod Cons made me want a scooter even more.

How did you get there: On the back of Andy Lamb’s Vespa.

Favourite and worst rally/event: My favourite is Bridlington. My worst, Morecambe, pre-season a few years ago, bad weather and horrible B&B.

Funniest experience with a scooter: My friend ‘Doll’ was riding his Lambretta up Madeley high street with me following, at the top of the hill there was a bus stop, bordered by a 6ft wall. There was a girl on the wall with a bag of chips and eating a sausage. Doll was so fixated by the suggestive way she was eating the sausage that he rode straight into the back of a bus. To say I pissed myself is an understatement!

What’s your favourite Scootering feature: Rattling around the garage.

Favourite custom/featured scooter of all time: Easy, the P200E ‘Revenge’. I’ve been told its still on the road somewhere. 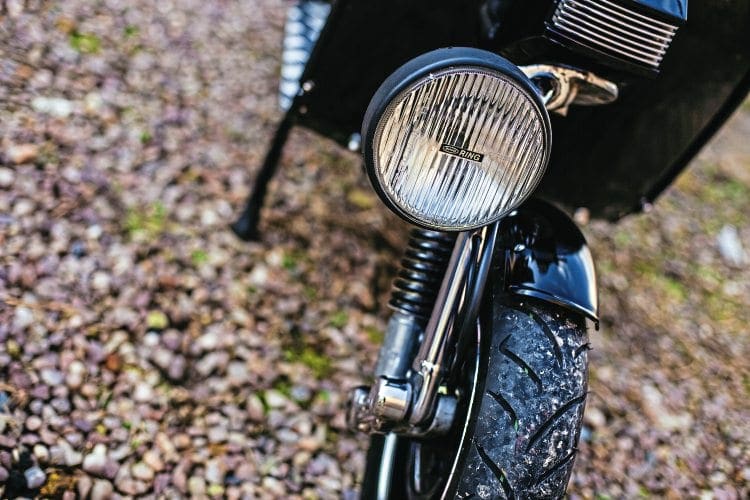 Date purchased & cost: March 2015, Andy Lamb gave me the frame, minus the engine, and a box full of parts.

Time to build & by whom: Seven months, by myself, Craig Shenton and Fordy.

Any frame modifications: Suzuki tank and rear end cut and also the seating position. Tank and the cut down rear end by a previous owner.

Are there are any specialised parts: It has twisted stainless steel racks, one on the back and a small one fitted to the floor tunnel. 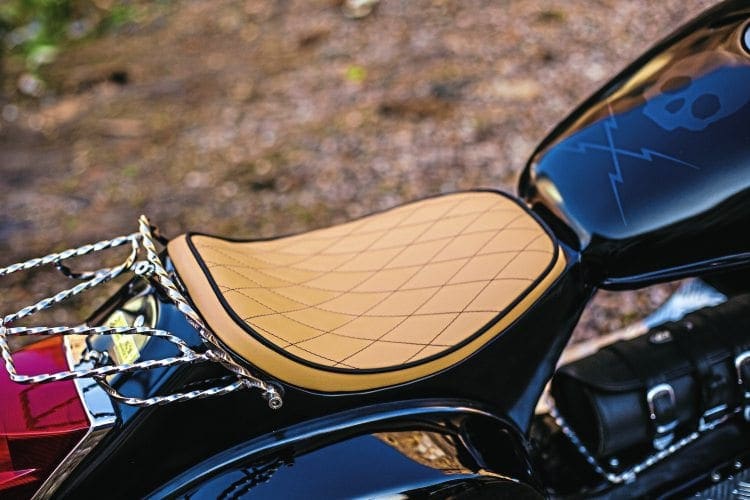 Hardest part of the project: Watching it get blown off the side stand in a freak gust of wind and the damage that resulted to the side panel. It had to be resprayed and airbrushed again. In hindsight, is there anything you would have done differently: I would have fitted the tank higher so that a spare wheel could go under it.

Thanks to: Craig Shenton and Mick Ford for the spannering, Corb for the garage space, Kit at Scooter 2000. Lastly, but not least, Andy Lamb for being a big influence to me in my early scooter days and also for his generosity.