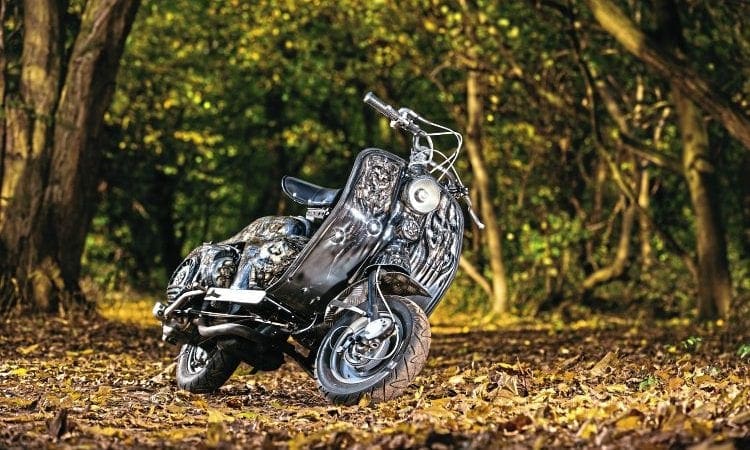 A thought-provoking combination of a 1950s Lambretta LD fitted with a Vespa PX150 engine, topped off with truly amazing artwork; Dark Star is gripping, intriguing and inspiring…

Paul Marks bought his first scooter at the age of 16 as transport to get to and from work and from those humble beginnings he’s developed into a knowledgeable and well-established individual on the scootering scene. Paul said: “After I’d bought my first scooter my passion for scooters and the scootering scene just went from strength to strength. I went on my first rally back in 1995 to Great Yarmouth and after that there was literally no looking back.” Paul’s always been a Vespa man, but don’t misunderstand him, he likes Lambrettas, and their look in particular…

I asked Paul how he’d come into possession of the LD/PX frame and engine set-up for Dark Star. Paul said: It was one of those moments when everything just fell into place. I’d always wanted a pre-1960s scooter but I’d never really been sure which model I wanted to go for. Earlier this year I was doing a deal with a pal of mine, Aaron Watts from Night Owl Scooters, and while we were doing the deal on some of the scooters Aaron was clearing I saw the LD/PX in his garage. As soon as I saw it I knew it was exactly what I wanted. I asked Aaron how much he wanted for it — Aaron said it wasn’t for sale so I had to think of a way to persuade him to part with it; my mind was made up, I wanted it and I think Aaron realised that because after a bit more negotiation we struck up a deal, which included me buying the LD/PX and a number of scooters Aaron was clearing! To be fair, the deal turned out to be a win-win for both of us; Aaron was wanting to downsize his stock and I got the machine I was always looking for.”

Paul’s had a passion for H R Giger’s artwork since he was at school, which along with the unique LD/ PX scooter made the choice of Giger’s artwork for the theme of the scooter perfect. In H R Giger’s artwork he has an ability to probe deep into the human imagination, portraying frighteningly accurate dark areas. In his work he opens a platform to a place where others would fear to tread or fear to explore. Giger’s artwork is a gateway into his world where he feels at ease surrounded by the uncanny and anything but normal. Paul said: “Based around H R Giger’s artwork and with the one-off controversial frame and engine set-up it made the perfect platform to support the theme.”

Taking all this into consideration, it was clear that the theme was always going to be a big ask for any artist, and Paul had to make sure he chose the right person to complete it. Paul said: “The artwork is the critical element, which supports the controversy of the scooter. I was satisfied that the theme and the scooter worked perfectly, but I needed to find someone who could also appreciate those elements and blend them together. I knew that if I could find the right person to do this the final outcome would be something special.”

Paul explained that in his mission to find the right artist to complete the artwork he’d recently been introduced to Gatch through Ricki Davis at RPM Scooters. Paul said: “Ricki had commissioned Gatch to complete a couple of custom scooter projects which he was involved with. I’d seen Gatch’s style of artwork and I thought his contemporary approach and interpretation to scooter art could be exactly what I was looking for.” Realising this, Paul contacted Gatch, he put his idea to him and during the conversation Gatch explained that H R Giger was one of his favourite artists. Paul said: “I could hear the excitement in Gatch’s voice and it was clear that he really wanted to do it. Gatch already had a vast amount of knowledge of H R Giger’s work and after I’d given him the overall brief of the theme I agreed to give him free rein over the design.”

I visited Gatch at his spray-shop where we spoke about the Dark Star project and H R Giger. He started off by explaining that getting the opportunity to paint an LD was a one-off in itself, and to get a historical vehicle dragged into this era with a modern engine was a unique blend of innovation. Gatch said: “The opportunity almost pitched itself. Every artist dreams of getting that phone call where a customer wants a scooter painting in an interpretation of an artist’s work who they admire. When Paul rang me and explained that he wanted his scooter painting in an interpretation of H R Giger’s work I couldn’t believe it. Giger is one of my favourite artists and the only stipulation that Paul gave me was to keep the erotic/phallic element of Giger’s work to a minimum.” Gatch clarified and said: “Basically, Paul’s a family man and he wanted me to keep the porn out of it! I had to keep it sensible, and dark and deep, but keep it firmly in tune with Giger’s work.”

Gatch said that when he received the scooter from Paul the base coat was already good and suited the dark element of Giger’s palette. In order to deliver the right shades of colour into the artwork Gatch explained that he started tinting the colours, which produced unique shades he could never get again. He continued: “The artwork had to be right first time, there were no second chances with this project.”

Gatch explained that the body lines of the LD were perfect and the PX engine gave a mechanical appearance, which supported the industrial look of some of Giger’s images. Initially the cylinder head cowling, flywheel cover and gear selector top were all a dull silver colour. But in his plans for the artwork of the scooter, Catch realised that he could make a feature of these parts. He said: “A lot of Giger’s stuff is quite tubular so a lot of the scooter parts work well to support this. Paul had left me to make my own interpretations but there’s a fine line between overdoing something and under-doing something. I had to keep myself in check; I know what I’m like, I can run with a project and because I was so enthusiastic about this project I had to be careful that I didn’t fall into the trap of overdoing it.”

Gatch was determined to follow Paul’s brief to the letter and wasn’t going to make the scooter look like a book cover of Giger’s work. To explain what he meant he said that he’d made various alterations to the images around the scooter, which served to support the overall theme and the curves of the scooter. In particular, and as an example, Gatch explained that the image, which in Giger’s original work is of a female face, and appears on the nearside side panel of the scooter he pulled machinery into the cheeks to make the image appear genderless. Paul said: “Looking at the scooter and the work Gatch’s done I think it’s perfect, and I think Giger would have approved of the LD frame with the PX engine because he was all about pushing the boundaries.

Name: Paul Marks
Scooter club and town: Independent Rider (Northampton).
How and when did you first become interested in scooters: Got my first scooter when I was 16 to use as transport and I have had them ever since.
First scooter: PK ETS.
Favourite scooter model: Vespa 152L2.
Favourite style of custom scooter: Street racer.
First rally or event: Yarmouth ’95.
How did you get there: On a tuned Vespa PK125.
Any stories: On the way to Yarmouth ’95 my friend’s Lambretta series 2 broke down and I had to tow him for about 30 miles.

Favourite and worst rally/event: My first rally was the most memorable as it was such an eventful weekend. Worst was sticky rock Skegness 2000 as it didn’t stop raining all weekend and the campsite flooded.
Furthest you’ve ever ridden on a scooter: 184 miles from Northampton to Blackpool in 1999.
What do you like about rallies/events: I enjoy the journey the most but I also enjoy the music and general camaraderie.
What do you dislike about rallies/events: Far too commercialised now, too many campervans and caravans, and not enough riders.

Name of scooter and reason: Dark Star, as that is one of H R Giger’s books.
Other themes you considered before this one: Always wanted to do a Matrix theme, possibly with a sidecar outfit.
Scooter model: LD150 with a PX150 engine.
Date purchased and cost: Acquired as part of a bulk buy of 17 scooters.
Inspiration for project and theme: Loved H R Giger since I was at school an always wanted to do a scooter with his artwork on, the LD was a perfect as it’s unusual already.
Specialised parts or frame mods: Few small parts have been changed since I purchased it; all parts were from RPM Scooters as they price everything realistically.

Engine spec: Standard PX150.
Describe engine performance, power delivery and scooter handling: The engine is slow but reliable, it handles well at low speeds but it’s a bit hair-raising at speeds above 45mph.
Other unique details: All the runner strips, light brackets and front mudguard were handmade.
Paintwork and murals: Gatch.
Hardest part of the project: Convincing my wife that I need another scooter.
Advice or tech tips for anyone starting a project: Dry build before painting.
In hindsight, is there anything you would have done differently: No.
Anyone you wish to thank: Gatch for all the amazing artwork, Ricki Davis from RPM Scooters for the cheap parts, Aaron Watts from Night Owl Scooters, Northampton for selling it to me.

Giger was a Swiss painter, whose style was adapted for many forms of media, including record albums, furniture and tattoos.

The Zurich-based artist was best known for airbrush images of humans and machines linked together in a cold ‘biomechanical’ relationship. Later he abandoned airbrush work for pastels, markers and ink. He was part of the special effects team that won an Academy Award for design work on the film Alien.