‘COOKING’ UP A RECIPE FOR SUCCESS:

Ever wondered which dealer does what, where they are and who they are? Scootering magazine takes to the road each month to get the low-down for our readers. Transferring racing technology to road use isn’t just a product of Formula 1, Chiselspeed prove that it’s also true for scooter sport. 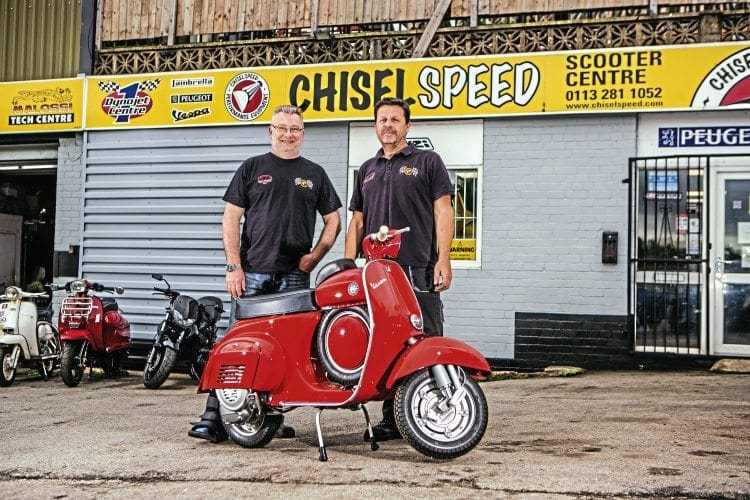 Located in Barwick-in-Elmet, near the outskirts of Leeds, Chiselspeed has a long history of innovation. Martin Cook said the origins of the business went back to the late 1970s: “Chris Mallows and I started to race with Leeds Central in 1977, we couldn’t both afford to race and he had a full licence. That made getting through the novice stage easier, so he got to ride and I tuned the bike. It worked out well and eventually of the 26 or so Central race scooters I tuned over half. It’s hard to explain to anyone who wasn’t around how difficult it was to get anything. Spending Saturday driving around just getting enough parts to race wasn’t unusual.”

Learning his craft on the race circuit, Martin successfully developed his own approaches to tuning and has numerous successes under his belt. “We were the first to break Fred Willingham’s 250cc record, the first under ACU rules to go under both 14 and 13 seconds for the quarter mile (a record we still hold) and ‘Fat Lass’, our Series 2 sprinter ridden by Russ Milnes was the up to 200cc sprint champion for three years.”

“Chiselspeed began in 1981 and has built up over time, settling here almost 20 years ago. I’ve a strong team — Julia, my sister, deals with the counter, Russ looks after Lambrettas with Mick taking care of the Vespa and auto side of the work. My son Chris also helps out when we’re busy. We aren’t the cheapest out there but I’m really proud of the quality we turn out, both from the workshop and the parts. Very little of our product comes back with problems but we do end up doing lots of remedial work on bikes that others have previously worked on. Getting it right first time is much less expensive in the long run.”

So what of the race to road applications? Martin is most proud of his M-Tech ignition systems. “This type of ignition have been successfully used on Zip racers for some time and I wanted something that delivered the same benefits for classic scooters. From the outset I specified a unit that would plug in to an existing ignition system. This is less expensive and if something goes wrong with the flywheel or stator, replacements are easy to come by. These were developed exclusively for us by Mike Sharpe, who works with Moto GP bikes and I’m proud that our units are produced here in the UK.

“If a customer lets us know how their engine’s set up we can dial settings in before dispatch so all they have to do is replace the existing CM. If their combination is more exotic, or they want to squeeze out every last possible morsel of power, we can fine tune on the dyno. As we refine our settings programmable units bought from us can be adjusted for the price of postage. We now stock M-Tech for the 2011 PX and they’ll soon be available for Gilera 125/180 engines.”

Known for their racing pedigree, Chiselspeed are main dealers for LML, Peugeot and Baotian, they also conduct servicing and dyno work. Lesser known are their restorations. “I believe we produce a high quality product that can be ridden. For example the 90SS we’ve just finished has electronic ignition. Purists may not approve but they’re more practical and can be returned to original if required.”

Chiselspeed’s popular exhaust systems are also making a welcome return. Our previous fabricator retired and it’s taken time to find a replacement,” says Martin “I’m pleased to say that I’ve found a UK supplier that I’m happy with — it’s much easier to ensure quality control with people based here.”

What about rumours that something special is on the way? “It’s too early to talk in detail but yes, I’m working with well-known tuner Bob Monkhouse on a 200 Lambretta barrel with twice the cooling area currently available. I want something that runs at a much lower temperature. This should deliver the amount of power people are accustomed to with improved reliability. We’re also keen to keep the standard carb location, so hopefully no more butchering of battery trays. We’re probably looking at another six months’ development work.”

The Chiselspeed team clearly aren’t content to rely on past successes to maintain their reputation. They are at the forefront of innovation, bringing lessons learned on the race track to everyday scootering. www.chiselspeed,co.uk

Often seen as natural rivals, a little known fact is that Chiselspeed and Dyrospeed worked closely together. As Martin explains: “It was the amount of work from Dyrons that enabled me to set up business on my own and I was heavily involved in tuning the 200cc Dyrospeed racer. After they closed we took over their premises for a while. It’s nice being neighbours with an old friend.”

WHAT’S IN A NAME?

Martin laughs when I ask about the name Chiselspeed: “It goes back to the early racing days, we had an LI with points that wouldn’t stop slipping. I got so frustrated that I found a huge screwdriver, it must have been 18in long, and machined the blade so that it would fit a points screw. The timing never slipped again but it looked extreme, Chris Mallows made the throw away comment ‘Chiselspeed’. The name never went away!” 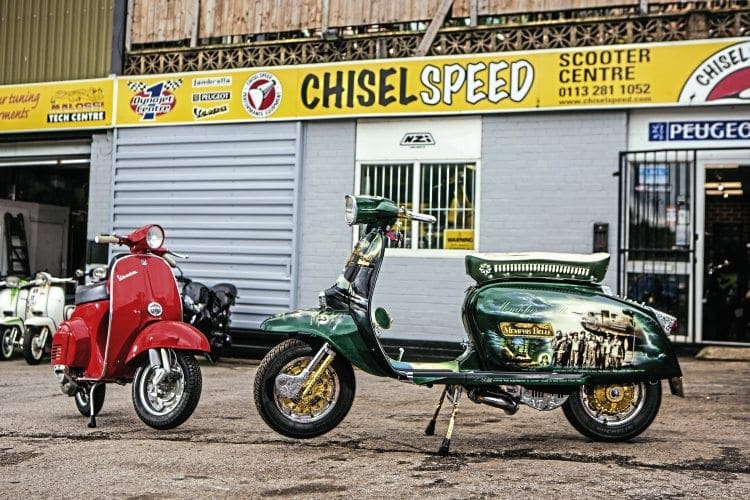 For most scooterists electrics are a dark art and for riders of classic scooters a spark, any spark, means it’s going to be a good day. However that’s only part of the story, so here’s M-Tech in very simplistic terms. Anyone with a degree in electronics should probably have a stiff drink.

We know what happens when an engine’s timing slips; at best it runs rough and at worst it stops. So clearly the time at which the spark occurs in the engine’s cycle is important. Manufacturers set timing to keep the engine running at all speeds and, if used for its original purpose with sensible riding, that’s fine. So a standard COI delivers a spark consistently across all revs, if we drew it on a graph it could be a flat, horizontal line.

This is a compromise and, face facts, most readers of Scootering don’t use their machines as the manufacturer intended. If an engine is to release its full potential the spark needs to occur at slightly different points in the cycle depending on the load it’s placed under.

An improvement on a standard CDI can be made by replacing it with the basic M-Tech unit. This senses revs and adjusts the timing accordingly. On our graph it could be shown as a straight line running from bottom left to top right.

This is absolutely fine for most applications but the programmable M-Tech improves things further. This unit can he adjusted to an individual engine and rapidly responds to changes as they occur in use. On our graph this could be a wavy line.

Whether your engine is tuned or used for long journeys it will work more efficiently. End of lesson. 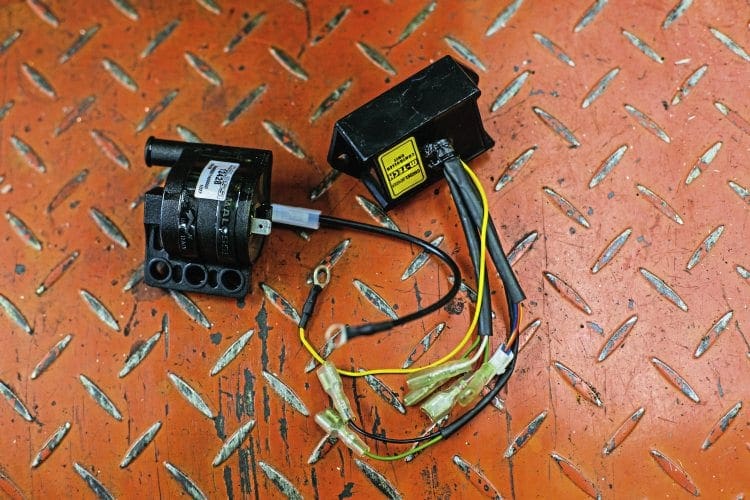