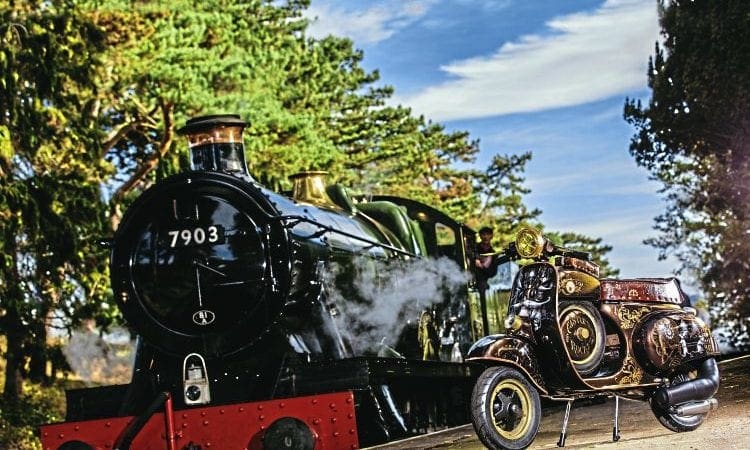 Every once in a while a custom scooter arrives that has everything, including that extra special WOW factor.

Castle’s Rocket unquestionably commands superlatives such as eye-catching, head-turning, breath-taking, jaw-dropping, among many other justifiable expressions of wonder. Quite simply, it’s pretty much a full blown custom that has had practically everything worked into its creation including stunning, intricate murals that fully depict the theme – steampunk. Detailed extras consisting of genuine vintage brass items both add to, and enhance the overall theme, while the one-off seat and dummy tank pad are both works of art in their own right. As for the engine, that not only has a Quattrini 200 top end it, it’s a full Quattrini engine, built and tuned at Readspeed. Even more unusual is that owner and builder Neil Castle opted for a small frame Vespa as the canvas for his latest creation. What’s more, like Neil’s previous custom projects, this scooter has been built to be ridden not hidden.

Going back to March 2013, there was something of a steampunk edition of Scootering, with three different creations that were themed utilising steampunk for inspiration. The three feature scooters were Lambretta and large frame Vespa-based projects. Although not totally unheard of, small frame Vespas, along with non-GP Lammys, tend not to be the base machines of choice with custom scooter builders. Neil Castle, who rides with Cheltenham Blue Diamonds SC is a prolific custom builder. Once he embarked on this particular project, it took him about a year to complete.


Castle’s Rocket is, obviously, a Vespa small frame, albeit actually a combination of three small frames. The main part is a 1976 Vespa 90 frame (V9A1T) which, when Neil obtained it, was a bit tatty and, among other previous modifications, had the legshields roughly trimmed to loosely resemble those of a 90SS. How did this project begin?

“It’s a combination of three frames to make one good one,” said Neil. “I had to cut both panels off to extend the frame outwards about an inch on each side. I got a pair of new quarter panels from a German dealer and welded them on at a very slight angle to suit how the Quattrini casings sit in the widened frame. For most of that operation, including the welding, I was aided, abetted and helped no end by fellow Blue Diamond, Weasel. I had to bastardise a few other parts off another cut-down small frame to replace or repair certain areas on the main donor frame.

“My initial idea, when I first bought the R-reg frame basically as a box of bits, was to matt black it with a pokey engine fitted. Things have a tendency to change with me; I suppose half my initial idea, as in the pokey engine was going to deliver some serious power, so adding the 90SS style dummy tank and the pad was both for appearances and practical reasons. The latter being so I’ll have something to, sort of, lean onto to keep the front end down.”

ReBorn to be Wild has been responsible for the paint and murals on a number of Neil’s previous custom scooters. On Castle’s Rocket, the steampunk inspired artwork is phenomenal. Cleverly depicted details have been worked in, which need much more than a quick cursory glance to fully appreciate. How did the initial idea evolved into the finished paintwork?

“I quite like the steampunk style, as well as the Lowry matchstick men paintings of the industrial era in the north. John and Sammy at ReBorn to be Wild, who have painted quite a few of my previous projects, share my liking of steampunk. I really like their work so no need to go elsewhere. Besides Sammy dresses a bit in the steampunk style, she wears a top hat with feathers as well as other stuff. I decided quite early on to name this scooter Castle’s Rocket, inspired by Stephenson’s Rocket, in a roundabout sort of way the engineer/inventor Stephenson was the unwitting grandfather of steampunk. John did the base paintwork, after which, with steampunk as the theme, John and Sammy let their imaginations run wild to come up with the finished article.


“Using some of Lowry’s original paintings as a sort of start point, Sam came up with the murals, instead of men in flat caps, there are mice in flat caps, which I like. The artwork is amazing, depicting inside and outside old factories on the side panels, the legshields and mudguard artwork is all in keeping with the theme. I’ve had the scooter completed for a while now yet I still keep noticing all sorts of clever artwork details in the paint. There’s also a lot of very subtle pipework depicted within the paintwork too. John and Tony at Reborn to be Wild did most of the frame modifications, excepting the extended and tilted panels. They mixed up a special paint, which has got brass particles in it, for the levers and wheel rims, in keeping with all the vintage brass fittings and extras.”

Attention to detail, along with getting the right balance of extras to enhance and complement a custom machine isn’t as easy as it sounds. Too little and any desired impact is minimalised conversely too much and it can result in overkill. Neil has got, I’d say, the right balance of brasswork, dials and copper piping on Castle’s Rocket. Finding vintage items to suit his scooter’s theme took more time and trouble than Neil originally anticipated.


“Once I decided on the steampunk theme, quite early on I got hold of a few aged to look old pocket watches. Soon junked them and that particular train of thought, because to be blunt, they looked shit! So the hunt was on for genuine vintage brass items from the 1820s, or earlier, that could be used or utilised. With the exception of the rear light, which looks very much in keeping with all the other brass parts, all of them are from that time or earlier. Never one to make it too easy for myself, they did take some searching and tracking down, I set myself targets as to where any brass items were linked to. As I’m originally from London and live in Cheltenham, I was specifically searching for brass parts with connections to either of those places. To start with the possible brass parts I found that could’ve been used all seemed to come from the industrial areas of the north. On the finished scooter, only the foot pedal came from the north east and that came off old factory machinery. The headlight surround with a grill, of sorts, was liberated off an old diving helmet.

“I’m particularly pleased with the pressure gauge on the legshields, with the cutaway, so you can see all the workings. Over the petrol, the tap is a London safe plaque, again from the 1820s. Brass cart horse wheel centre bosses date back to the late 1600s early 1700s. Gary at Leathery Elephant has done a few seats for other customs I’ve built; he’s always delivered to quality. On Castle’s Rocket, he did both the seat and tank pad, exceeding even his own high standards with them both. Probably the hardest part of building Castle’s Rocket was fitting the copper pipe as a legshield and front mudguard trim. It had to be ground, crimped and then lacquered; Tom at Reborn to be Wild carried out that particularly awkward operation. Fitting a Vespa 90 mudguard to the PK forks proved to be a bit of a mission was well.”

“After discussing what I had in mind with Jerome at Readspeed, we decided to go down the Quattrini route. Lots of good reports on what the 200 Quattrini kits deliver from over on mainland Europe helped in the decision. It’s not just the top end Quattrini kit; we went for a Quattrini crank, engine casing and exhaust too. Gear kit is 27-69 and there’s a Falc cassette clutch. Jerome has worked his magic by carrying out extra porting work too.

“Quattrini recommends and provides a Dellorto 28mm carburettor as standard, which is what’s on there at the moment. But, having been Readspeed tuned, the carb may or may not need to be changed. At the time of the photoshoot I’d only clocked up a few miles on Castle’s Rocket, it’s not been set up on a dyno as yet. Once we’ve done the dyno stage, depending on how well it all works, the setup might need to be changed. What I do know after clocking up just a few miles so far is that it’s potentially ‘kin fast. As we’re moving into the winter months now, I’ve started work on my next project – a Vespa chop. With Castle’s Rocket, there’s still the dyno set up of the engine to do.”

I’ve a feeling that once Castle’s Rocket does appear on the rallies next year, there’s going to be some serious interest, admiration, possibly some metaphorical drooling too, invoked by the sheer quality of Neil’s latest custom creation. With a likelihood of it being viewed alongside some of the elite show-stopping custom scooters of all time.

Name: Neil Castle
Scooter club & town: Cheltenham Blue Diamonds.
How did you first become interested in scooters: Dad had a GS.
Your first scooter: Primy.
Favourite scooter model: GS.
What is your favourite style of custom scooter: Smallframe (at the moment!).

First rally or event: Isle of Wight 1982.
How did you get there: Primy.
What’s the furthest you’ve ever ridden a scooter: 200+ miles.
What’s your favourite Scootering magazine feature: Custom feature scooters.
Your favourite custom/featured scooter of all time: IBBO’s Series 1, Bettie Page.

Name of scooter and reason: Castle’s Rocket (as in Stephenson’s Rocket), Steampunk and ‘kin fast.
Scooter model: Vespa 90/Quattrini 200.
Inspiration for the project: I like steampunk stuff, luckily so does Sam Cave at Reborn to be Wild. Both Sammy and John let their imaginations run wild on this one!
Time to build and by who: Yearish. Me.
Any frame modifications: Panels widened and tilted – Weasel (Paul Hardwick). All other bodywork and alterations by Tom Clark and John Tooze at ReBorn to be Wild.

Are there any specialised parts: A lot of pre 1820s brass. Seat and tank pad by Gerry at Leathery Elephant. PK front disc forks. SIP Performance rear shock. 2.0 race. BGM Pro/Comp front shock.
Engine spec (please list all changes from the standard spec of the engine): Kit: Quattrini 200. Crank: Quattrini. Carb: 28mm Dellorto. Exhaust: Quattrini. Clutch: Falc. Gearbox: 27-69 gear kit. Porting and dyno work by: Jerome, Readspeed.
Paintwork and murals done by: Sammy Cave – murals, John Tooze – paint. ReBorn to be Wild.
Is there any engraving done by: Tried to use as much original brasswork as possible for aged look.
Is there any powder coating: Levers and wheels painted with brass particle mix.
Is there any chrome: Copper tube used as legshield trim (all done by ReBorn to be Wild).

What was the hardest part of the project: Fitting legshield trim and mudguard trim made from a length of copper pipe (thanks Tom Clark, ReBorn to be Wild). Fitting 90 mudguard on PK forks.
Is there anyone you wish to thank: Special thanks to John Tooze, Sammy Cave and Tom Clark at ReBorn to be Wild. Did loads! Weasel from Blue Diamonds for welding stuff. Gerry at Leathery Elephant for a stunning seat and pad. Mark Eavers at Burlow Engineering for the brasswork machining. Jerome as always for Readspeed engine.