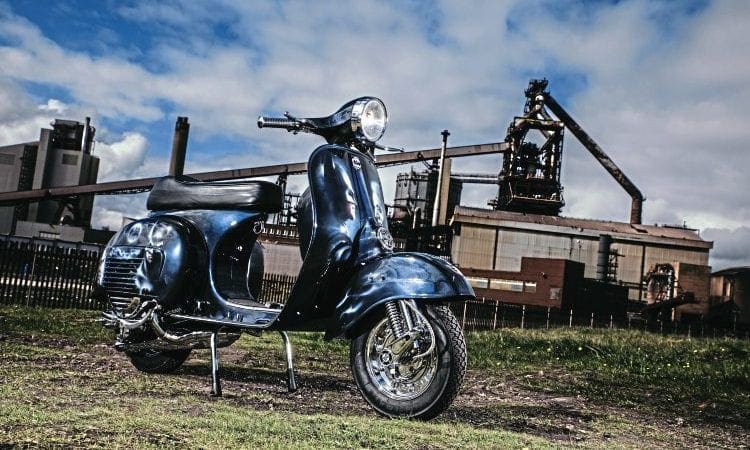 Forget West, Keaton, Kilmer, Clooney and Bale. For Scootering readers Lightfoot may be the greatest name yet to be associated with the Caped Crusader….

Chances are that anyone who’s attended any Vespa Club of Britain rally over the past few years has met Jane Lightfoot. Best known for ‘Bella’, her rat-look Motovespa, Jane and her husband Tim are enthusiastic supporters of the club and passionate about all things Vespa. “I just love the curves of an old Vespa,” said Jane “and the Rally is my ultimate scooter of all time.”

Although the custom scene’s changing it’s still a predominantly male domain and Batman has the rare distinction of being shown by two female owners. First built in 1990, the original concept was developed by Sonja Jameson. With striking murals executed by Ian King, Batman enjoyed some success and under Sonja’s ownership was no stranger to the winner’s podium. “The first time I saw the scooter was at Santa Pod in 1990,” explained Jane. “I didn’t realise it was a TS125 at the time. I now know that it has the same frame as a Rally but no ignition in the headset. There weren’t too many custom Rallys with murals at the time and I really liked the look of it, after all who doesn’t like Batman?”

In 2005 Sonja decided it was time to pass Batman on to a new home and advertised it on the internet. By good fortune Jane was in the financial position to realise the dream of finally owning a Rally and together with Tim went to see if Batman would fit the bill. “Being perfectly honest we weren’t expecting too much,” said Jane. “It had been around for a while and we thought the paintwork was probably past its best, something reinforced by the photos on eBay being around 14 years old and scanned from Scootering! Our best hope was that it hadn’t suffered too badly from the floor rot so common with British-registered Rally

200s.”  Much to the couple’s surprise, not only was the metalwork sound but the paintwork was also in exceptionally good condition. “We struck a deal and Batman headed home with us. Unfortunately the chrome work hadn’t survived too well and while that was being attended to by Quality Chrome, Tim replaced the cables and did a full engine rebuild. I entered it in the Kits and Brits Custom Show that same year and it picked up a trophy. That was a very proud moment for both of us.”

Whether talking about Batman or her beloved Bella, Jane has a consistent view on whether custom scooters should be ridden: “All custom scooters have a limited time in the limelight, I think it’s important to show them off at every opportunity.” For Jane this meant riding Batman to rallies both in the UK and Europe. Inevitably the paint began to suffer and black nail polish was used to hide a multitude of sins! During a trip to Belgium in 2014, Jane took a tumble causing considerable damage to the front mudguard. With the original artist now unavailable she turned to the legendary John Spurgeon. Not only has he recaptured the look and feel of Ian King’s original murals, but in reworking the base coat John has emphasised the more recent, darker, iterations of the Batman franchise and it’s a million miles from the camp, cartoon-like TV series of the 1960s.

The original TS engine long since gave way to a standard P2 unit, an engine in which Jane has absolute faith. While it may not feature smoke dispensers, slasher hubs, missile racks or ejector seats this particular Batmobile does have a far more useful feature – autolube. One of Tim’s specialties is squeezing an autolube tank into a premix frame and Batman proves that the transplant’s possible in a Rally type frame. Other finishing touches include Batman badges on the horn-cast and seat while an SIP speedo not only measures speed accurately but can also be seen in the dark! Still to add are a BGM front damper and there are also plans for a few more bespoke ‘Bat’ themed accessories such as fuel tap and choke.

It may be almost 30 years since this scooter’s first custom show but there’s no doubt that it has made a triumphant return this season. Not only his Batman a scarce survivor of the 1990s, but its succession of female owners probably makes it unique on the custom circuit. Looks like it’s time to move over Robin, Batman’s finally found his girl, and she’s firmly in control.

Name: Jane Lightfoot
Scooter Club: Smugglers Scooter Club – Saltburn and VCB.
How and when did you first become interested in scooters: Way back when I was 13 and into the Mod scene. We use to hang out about town and the older lads and lasses would come and see us. What was your first scooter: Vespa Douglas V100 at the tender age of 15.

What is your favourite style of custom scooter: I love anything from a rust rod to a fully muralled scooter.
First rally or event: First event was Scarborough unofficial rally in 1984 and first National was Morecambe 1985.
Any stories: My favourite story is about how I met my husband. As a 15-year-old Mod I saw Tim laid on a piece of grass at the side of road chatting with some of his mates. They had only stopped because Tim, a very cool-looking 17-year-old, had fallen off his brand new PX125. He says it was the worse day of his life but I think it was the best, well for him anyway!

Favourite and worst rally/event: I love any rally abroad. It’s a totally different experience to going to a rally in the UK. Miles make smiles especially on sun-kissed roads, I’ve been to a fair few rubbish rallies but still enjoyed myself. It’s what you make of it that matters.
What’s the furthest you’ve ever ridden on a scooter: Tim and I went on a four week holiday in Europe with Vespa World Days in Croatia as our destination. Afterwards we went on to Italy before finally coming home. We travelled through 10 countries in total and did 4367 miles.
If you had to recommend one scooter part or item of riding kit what would it be: Legshield mirror. I have one on another scooter but not on Batman. I still look for it every 10 minutes though!

Paintwork & murals done by: Original paint by Ian King with more recent work by John Spurgeon.
Chrome: Quality Chrome.
Is there anyone you wish to thank: Tim, for all his hard work just to make me happy.