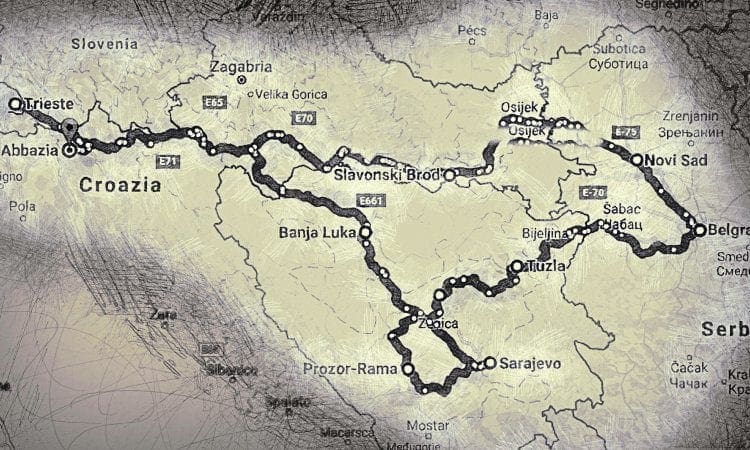 With his diary and pen in hand, our favourite Italian scooterist took his ‘Negra’ Vespa on another mammoth journey. Now returned, Christian lets us peek at the diary highlights of his epic adventure across the Balkan Peninsula. 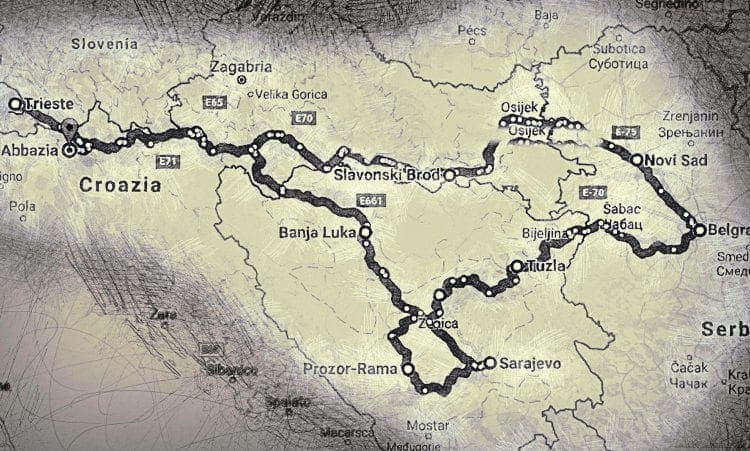 Thinking about a trip across the Balkans always brings with it a taste of adventure. Even today, years after the 1991 conflict that divided the region and made these lands tragically famous, some people are wondering what condition the roads are in, whether it’s safe to traverse them, and what pitfalls they might encounter beyond the walls of once bombed-out cities. Although historically speaking we’ve only just left the bad times around the last corner, the Balkan people are trying to move forward with exceptional hospitality and warmth – something I discovered in abundance during my latest journey. Trieste in north-eastern Italy was once again the starting point for my exploration. Walking through its hilly streets, at the highest points you can glimpse the edges of the Slovenian territories in the far distance and the forested Croatian hills and mountains. It’s all just a stone’s throw to the east.

I’m en route to Prezid in Slovenia. During a break the Bora, the violent and unpredictable wind that howls through the streets of Treste, teaches me another lesson. A gust slams the Negra (my scooter) onto the ground, breaking the front brake lever. It’s the curse of the mountain and it always happens when my chosen route becomes intertwined with another. State road D305, heading towards Brod na Kupi, weaves in and out between the Croatian and Slovenian borders like a footballer dribbling. Going the same way, the Cabranka and Kolpa rivers blend together, becoming a water border that runs alongside the road; above the right bank beats the Slovenian flag, left the Croatian. 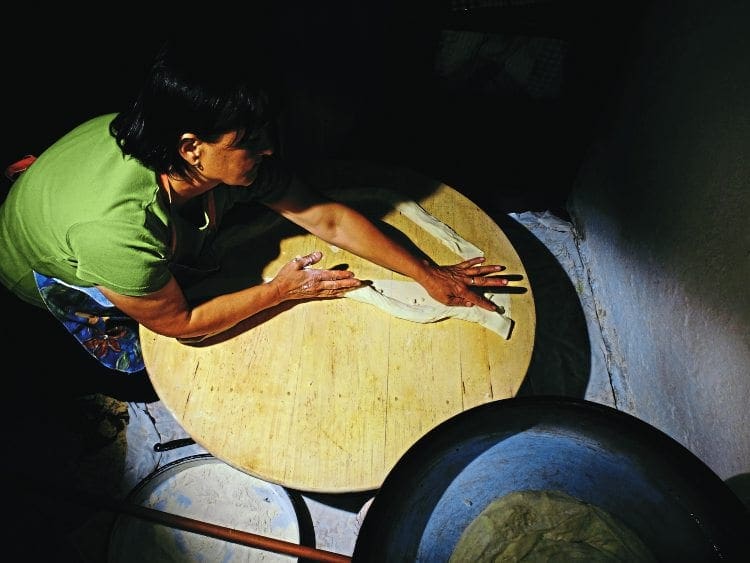 Having passed through both countries, I arrive in Banja Luka and get my first taste of the hospitality that Bosnia and Herzegovina is becoming famous for. This is a place where the simple process of consuming a cup of coffee can last for several hours and an exchange of glances can quickly turn into a hug. I park Negra by the local university’s Italian studies department. I am here to speak to some of the students about my home country. There is something different about Banja Luka that I cannot quite put my finger on at first. Then it hits me right between the eyes. “In Banja Luka, the ratio of women to men is seven to one,” says a student with a soft and shiny look. I look around and as I walk the hallways lips are drawn from lipsticks and mascaraed eyes observe me with curiosity. The more I look at my own vespista uniform, the morel realise I appear to be dressed like a fisherman. Whispers escape between the fingers of hands placed over mouths and drumming pairs of heels follow me towards the classroom where I have arranged to give the lecture. I recall a song I heard the day before: No Escape (from Balkan) by Dubioza Kolektiv. I’m trapped!

The border between Bosnia-Herzegovina and Serbia lies on the riverbed of the Drina. The watercourse is divided in half right down the middle and according to the elders of Mali Zvornik, a small Serbian town, even the fish swim differently according to political choice or ethnicity. Negra attracts the attention of a couple of guys leaning against a wall and they respond to my greeting with the movements of the ‘picciotti’ (the rank and file of the Mafia) — a raised eyebrow or a lip grimace. 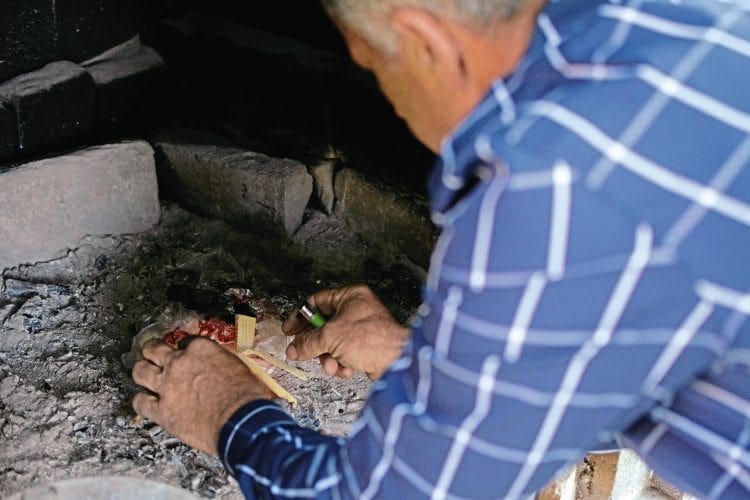 An iron bridge, now pedestrianised, is a crossing point between the two states. All motorised traffic instead pulls to the right of the city and after a series of curves crawls onto a bridge where the passport control is situated. The policeman comes out of his booth, his eyes hidden behind dark glasses, and indicates the Vespa’s front luggage. I open it, allowing him to shove his hands in and his snout. 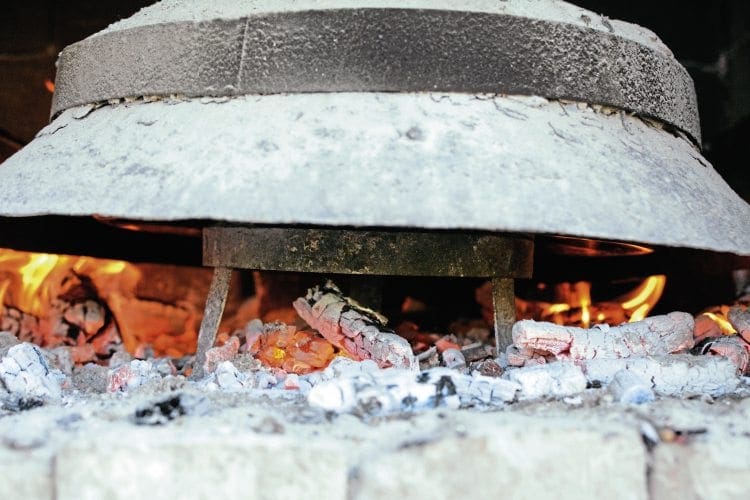 His initial frostiness disappears completely at the sight of a small bottle of rakija (a local liquor, normally distilled illegally} given to me by my Bosnian friends. The cop takes off his glasses, looks me straight in the eye and says: “Italian rakija. Good.” With a wry smile he throws the passport at me and beckons me to enter Serbia.

The Serbian capital welcomes travellers arriving from the south with the intertwining of a narrow-gauge tram, yellow and red tin boxes swaying on flamboyant rails by pantographs. After the central train station, an elevator introduces the first streets of the city centre; that’s where I park Negra to go take a walk in the urban sprawl. The waters of the Danube and Sava embrace right beneath the walls of the old city also delineating the boundaries between the modern skyscrapers of the Novi Beograd district and traditional look of the multi-coloured Kafane in the old city. It’s been 1219km since I set off through Slovenia, Croatia and Bosnia and Herzegovina. I order a beer, lighting my pipe. Grilled meat and mugs of foamy beer will keep me company now for a few days. 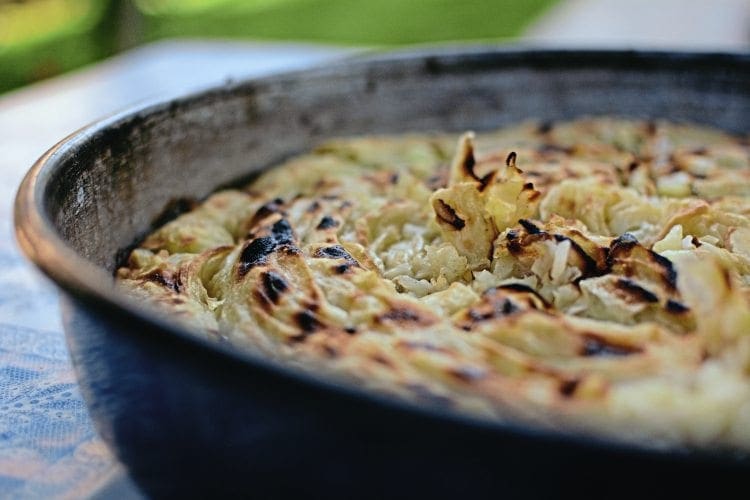 The secret of truly excellent ‘pita’ — a sort of Bosnian phyllo pastry pie, entirely different from the more familiar flatbread — is kept less than 60km from Mostar, in a house guarded by white walls. Vhrera, a seven-year-old-cow residing in the garden announces the arrival of visitors. I launch the Negra and my 40lb of luggage up the hill which leads to the property. Halfway up, the exhaust muffler fails, turning the Vespa into an anti-aircraft gun battery. Mortified that I have killed the peace which surrounded the place, I turn off the engine and I proceed on foot. The food, cooked in a special container over an open fire, is worth the effort. I leave behind BiH (Bosnia-Herzegovina) with the aim of reaching Italy in a couple of days and hope to see my new friends again. Travelling by myself creates that paradox of the solitary explorer — the more alone you become, the more magnetically others are attracted to you. And then you are no longer alone. 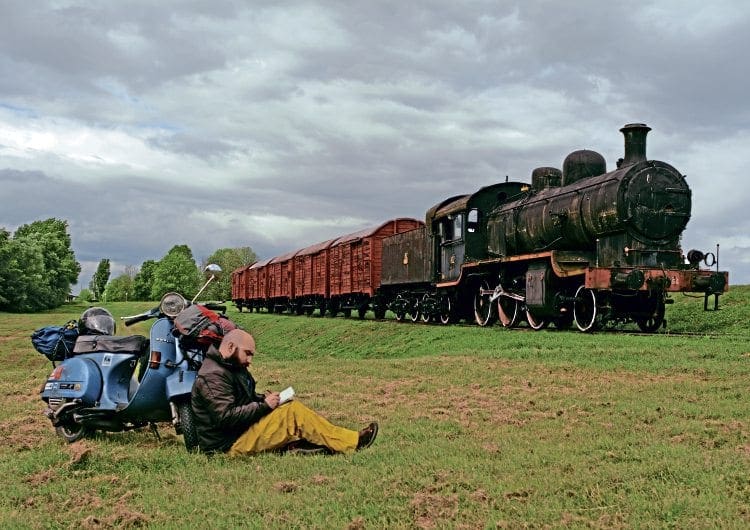 Negra’s licence plate seems to be a constant source of curiosity wherever I go, leading bystanders to speculate on the origin of the machine and generating random encounters. That’s how I have come to know Slavsko. Our paths cross when I stop for a break to rest my now-aching lower back muscles. After having responded to my ‘Dober dan!’ (Good morning!) greeting, and having walked around the Negra, his eyes light up as he says: “Vespa!” It’s like a magic word, immune to translations or cultures. In a few minutes I’m sitting on a couch in his home, where I am offered Slavic salami, homemade yogurt and big chunks of bread. (Ed’s note: Sounds like the plot of a porn movie!)

When you are kidnapped by the Balkans, you never quite get away. After passing Slavonski Brod and the flat countryside of Slavonia, the scenery looking like a watercolour painting, 1 point Negra towards Karlovac and that’s where everything goes wrong. A heavy rain-cyclone, that I thought I’d missed with my early departure, begins to follow me as I travel westwards. The Negra starts to throw a tantrum, and I am forced to make three stops (each lasting an hour) for small repairs. During these enforced delays, the weather overtakes me. 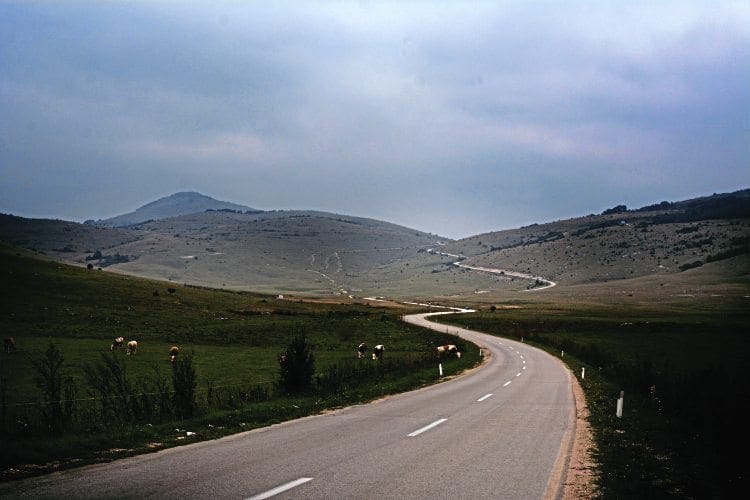 The temperature drops ten degrees and unleashes a couple of showers while I am fumbling with the engine and the raindrops turn into bails of ice, obliging me to make a tactical retreat inside sheltered bus stops. I reach the Istria coast by 8pm and I’m now on the infamous ‘wind-road’ which leads to Trieste. The final gift of this Balkan journey is still to be delivered, however. Snow! Fortunately my contacts in Trieste welcome my arrival with open arms and a warm dish of pasta and meatballs. I’m lucky, for once again the winding western roads and winds allowed me safely home. 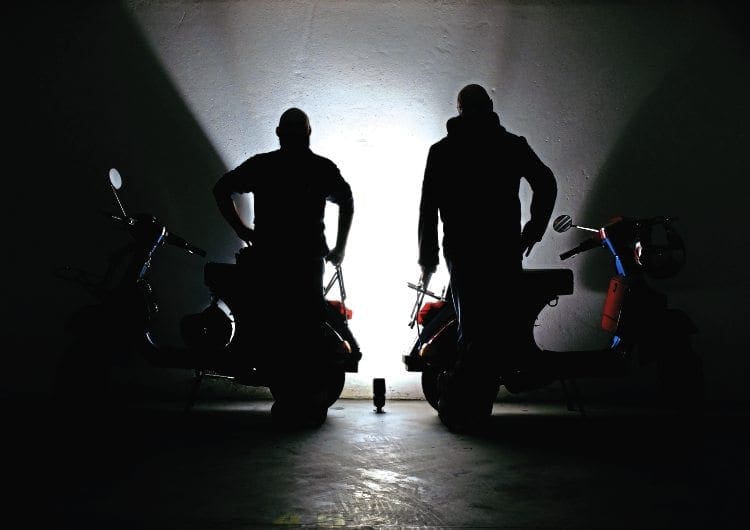 An engine power shut-down during the trip made me immediately think of a problem with the piston rings. I sensed no sudden voltage cuts however — the fault presented itself each time there were hill climbs to overcome. After a first check to compression ‘by ear and foot’ I then dedicated myself to investigating the ignition system. 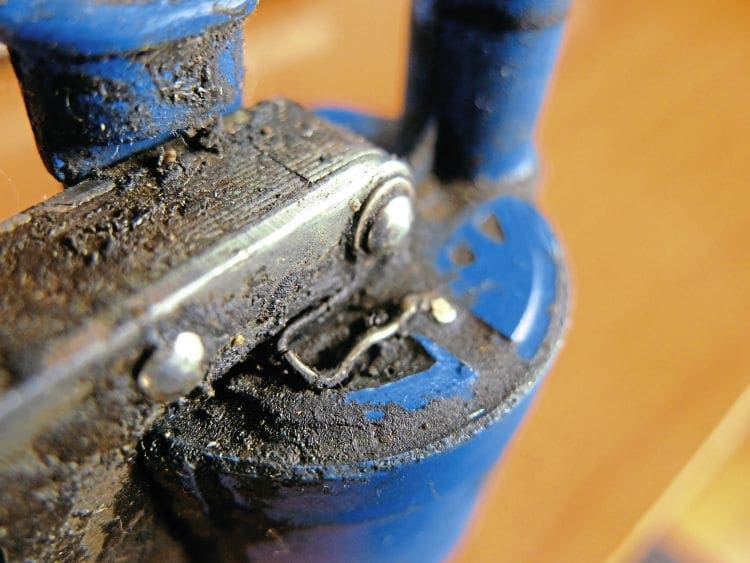 My stubborn and perhaps excessive love for the points and condenser has seemingly come to an end. I found an anomaly to the spark plug cable. After replacing — in rain — the cable, the problem came back one hour later, again during a climb. With more and more doubts I replaced the coil and I cleaned the carburettor, happily taking advantage of the roof of one of the bus docks. The problem is not resubmitted, but once we got home, I looked more closely at all the ‘faulty’ parts which I had replaced. Apparently the vibrations caused by uneven roads and the normal vibration of the engine had created a tiny tear of the weld in the vicinity of the spark plug cable. This was an abnormal failure which had never happened to me before, especially when driving. It was closer to a loss of mechanical power than to an electrical power-cut. The best school is the road, no doubt about that. 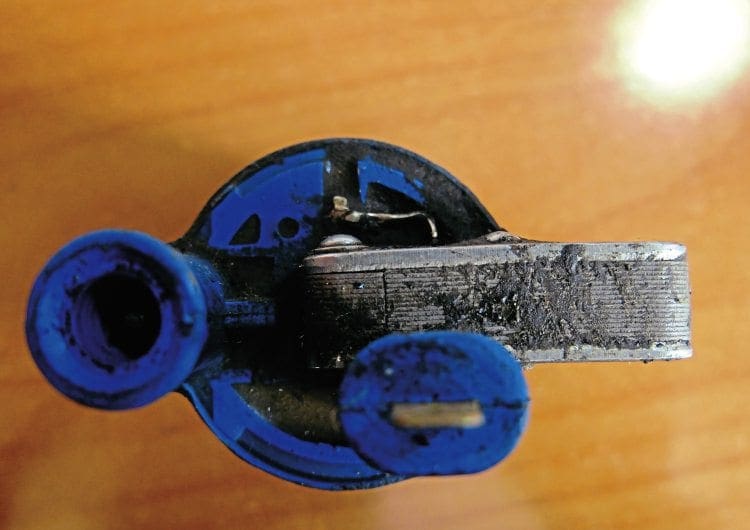 Even in areas that were affected by the conflict, the Balkan roads are in good general condition. Often crews are actively engaged in the restoration of the road surface, and in these instances the worst case scenario is to find an alternative dirt road. In 85% of these cases, you will still be carried along to the destination you wanted, complete with road signs. 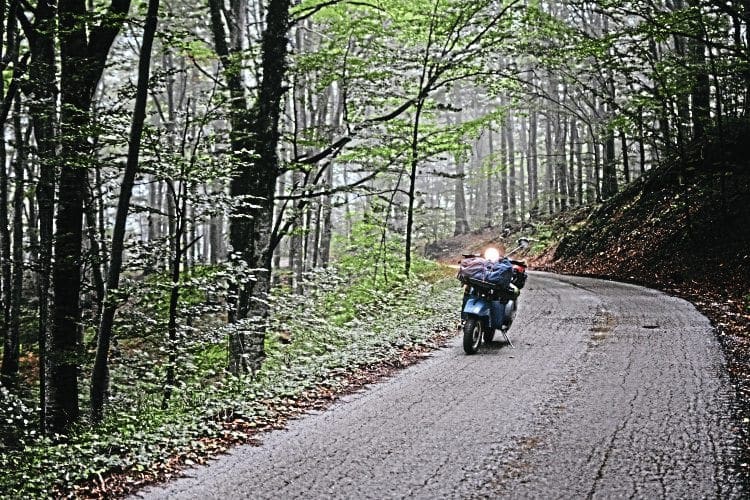 The inhabitants of the Balkans, especially the remote ones, very much appreciate any effort you make to speak the local language. A random encounter can easily end in drinking a beverage and having a conversation through simple gestures. In big cities, English is spoken frequently, but not necessarily in a way that is easily understood. The food, even from the early borders with Slovenia, changes a lot in favour of grilled meat and pita, and before every meal they will offer rakija that each city sells as the ‘best in all Balkans’. Be careful though, the road traffic police have zero tolerance on alcohol consumption. 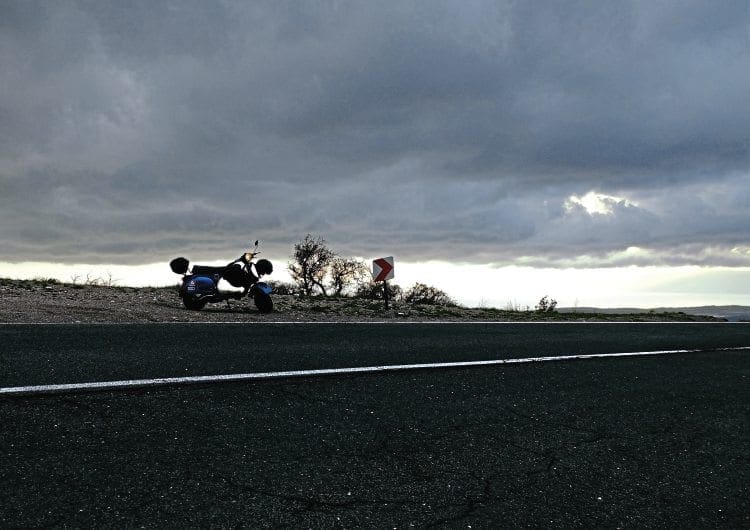 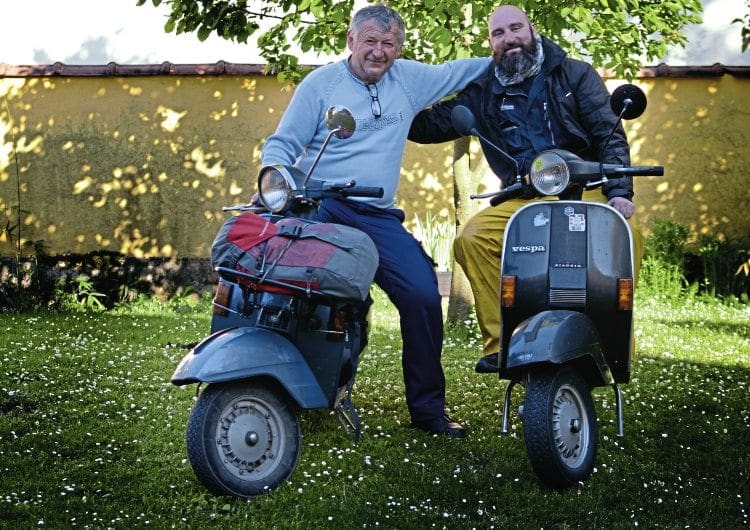