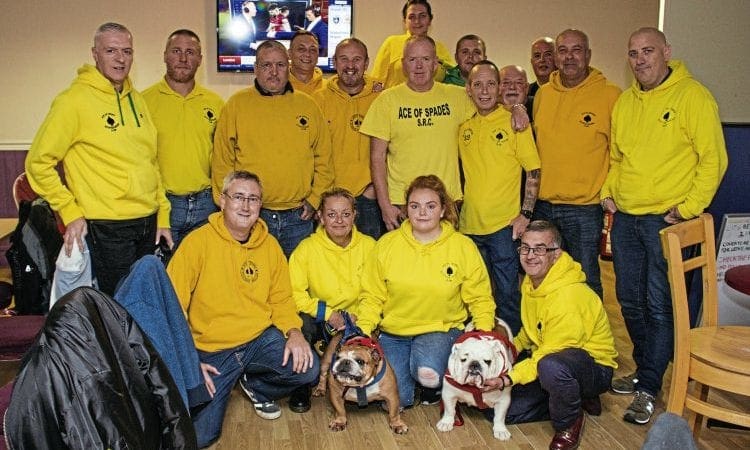 Scootering meets up with the Ace of Spades SC so they can tell us their story, straight from the horse’s mouth…

Everyone has seen the Ace of Spades SC from Bold at one rally or another… I mean, it’s hard to miss them, with their bright yellow T-shirts, hoodies and the like flitting round here and there like manic oversize wasps on a mission. I met up with them at their local. Now, here is a confession, anyone who knows me will confirm it, I have a shocking sense of direction. Dreadful. I even ended up in the wrong country once, honest, but that’s another story. That being so one of the chaps, Mike Barr, guided me in. We sat around a table and each added their own view of the club, scootering and the world in general. Mike pointed out that some of the club had a couple of spare tyres here and there (not 3.50 by 10, either) and he put it down to the everything going downhill when one of the club (Dave) offered free pizza.

After that kind of intro, it’s pretty needless to point out Mike’s statement of the club not taking itself too seriously, and that’s easy to believe, even I didn’t think that the yellow hoodies and the like were a fashion statement. As Mike explained, everyone in their club has an equal say and must put up with having the piss taken out of them. If you can’t handle it, then don’t come. Mike said: “A lot of the club were originally 80s and 90s scooterboys. Individually we all got back into it after a while of being out of the scene about 16 years ago. Most small clubs call themselves a scooter club; we call ourselves a scooter riding club. We went with that name, because as far as we could see, there were a lot of clubs that were meeting, but not doing much riding, whereas we met and we’d ride virtually every other weekend. “We came up withthe name as one of the original St Helen’s clubs back in the 60s was called the Ace of Spades. Probably around that time we chose a colour, because most clubs choose a colour, and we chose yellow for a couple of reasons. One was that no one else seemed to be using it and the other is that we could spot each other and other clubs could spot us a mile away. It’s a fact, whenever you’re on a rally, you just have to have a scan about and you can pick us out no bother. Even if there’s hundreds of people, you can see us coming. It’s an awful colour, but it does the job and we’ve become known for it. Many clubs have told us that you can always tell when the Spades turn up.

“It’s been a big club for the whole 15 years, it didn’t start with three members and then grow, I guess we’ve got about 50 members, When Pontins was big over Southport way, we’ve taken over 50 on our own… not 50 scooters, but members on that one.” He said that the Spades worked with many associate charities and “at the end of each season, we have a do, and instead of the money going back into the club, we all vote and then the voted for charity gets the cash”.

Voting is a cornerstone of the Ace of Spades way. Mike said it was all very democratic: “We’re a club, a co-operative and we’re all mates. There’s nobody here has the last say. Anything we do, or want to do, or is proposed, it goes to a vote and everyone has the same vote, and the majority carries. It doesn’t matter if someone’s been here 15 years or three years, it just doesn’t matter, and we all have the same weight of vote. There’s no dictatorship.

“To keep us together as a club we always go to an event together. If there are two events on the same day, we vote and all decide which one we’ll be attending. If you’ve got half a club going to one, half a club going to another, eventually, that’s where the splits start. I’ve seen this all too many times before. Even though it might not be to everybody’s cup of tea, we all appreciate the way things are to be done. It’s better for all of us in the long term, you see.”

This egalitarian attitude extends to scooters too — you can ride any make or model with the Spades, although you might have to bear in mind the golden rule about light-hearted banter: “If someone wants to join our club, there are a few things to bear in mind: Can you drink? Can you have the piss taken out of you? And will you RIDE? That is the criteria.

“You’ve got to have broad shoulders. You screw up and you’ll have it. Break down, the cameras are out and we’ll ruin you… but in the nicest possible way. Anybody who wants to join this club, we always say the same thing to them — you are going to get the piss taken out of you and you’ve to be able to handle it, but all in fun, In fifteen years, there’s not been a fight, we ride together, we screw up together, but we stay together. To us, the clubs that are strongest are the ones that have always been strongest, like the Salford Knights… and us. I think what bonds this club together and keeps it big, it’s not just scootering, but we’re all here together to help out with whatever. We’ve met through scooters, but it’s gone beyond that.

“Once you’re a member, you’re a member for life, and beyond. One of our lads has passed on, so we’ve had a banner made, and we take it everywhere we go. It says ‘to Rob’, and we’ll raise a glass, so he’s still with us. Rob went through some real troubles, cancer, he had to have his leg off and his achievement was (we found out after he died), that no matter what, he’d come to the Spades, each week, even if it was for only half an hour, just to get away from everything. If you’re in the Spades, we’re there for you.”