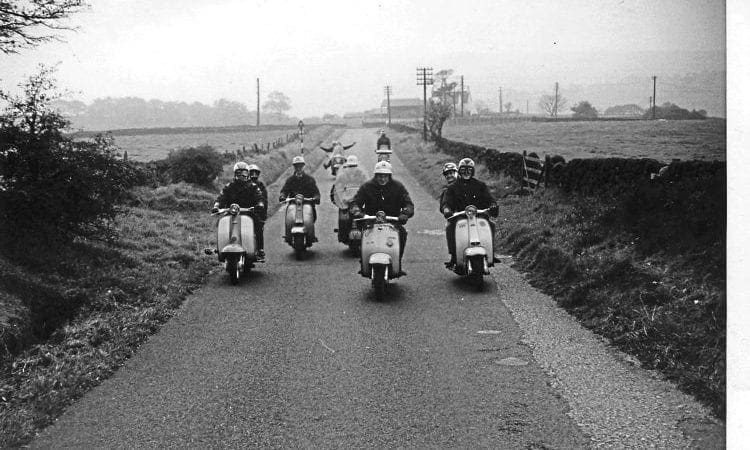 from Manchester Mancunians to Angels in Macclesfield…

Maico Bill recalls one of the best weeks of his life, with his club pals, scooters breakdowns, beers and parties! 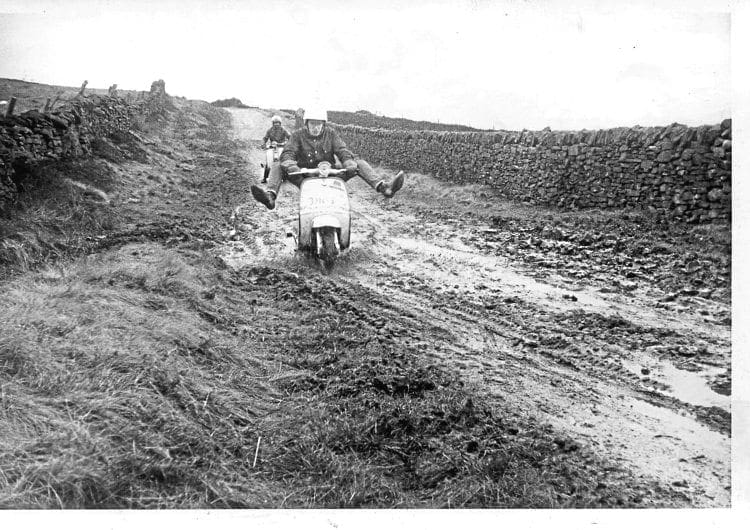 It was midday during August 1964 and I was just finishing off a service on my German Maicoletta 250cc scooter when Dave arrived on his Lambretta Pacemaker. All that remained to do was fit the new spark plug which I had bought in a hurry that morning and strap the tent and luggage onto the rear rack and we would be on our way. The previous night we had been well sozzled and decided in a drunken state to follow our club, the Manchester Mancunians, down to sunny Paignton with little money but a lot of hope… and we were going to need it! 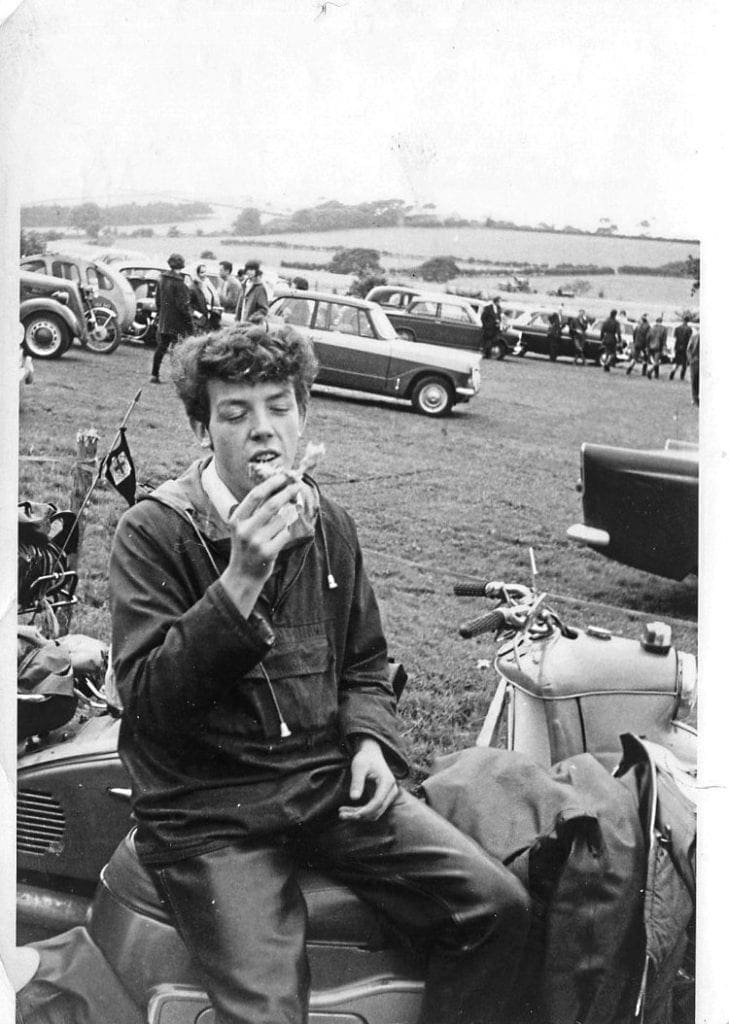 At a set of traffic lights Dave came alongside and said: “Your rear tyre is so bald I can see my face in it.” I reassured him it was fine: “It grips the road for fun!” This was long before slicks and we continued on our way down south. Arriving in Bristol early evening, my Maico started playing up. The spark plug that I had replaced kept unthreading and threatening to blow out. Tired from the journey, all on A-roads, and the previous night’s heavy drinking, we pitched our tent at a site near Winscombe in the Mendips. 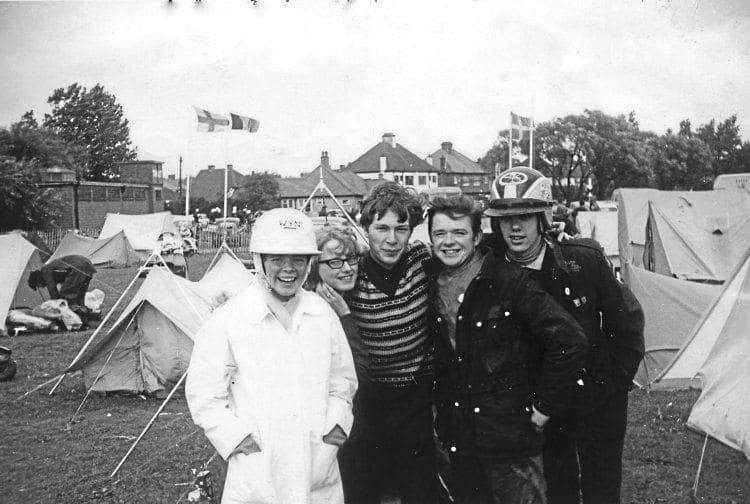 The following morning I found an empty packet of Park Drive cigarettes in a waste bin, removed the silver foil and wrapped it around the plug. I inserted it back into the cylinder head which did the trick. A few hours later we pulled into Goodrington to find our pals John, Mike, Phil, Garth, and others supporting the local bar, where we joined them until we could hardly stand. Later after a number of failed attempts amid bouts of laughter the tent was finally erected. 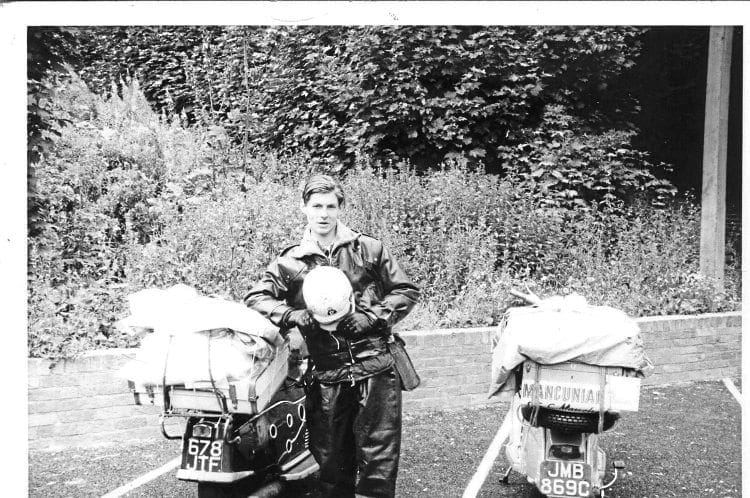 The small shingle beach below the clifftop camp-site at Goodrington was a sun trap and we swam, sunbathed, drank and had lots of fun. All was going well until midweek when I fell asleep and badly sunburnt my back. The remaining nights were horrendous with little sleep, however, evening trips into Paignton to sample their black and tans (bottle of stout and half pint of local ale) followed by a chinkie (Chinese meal) helped to ease the pain. 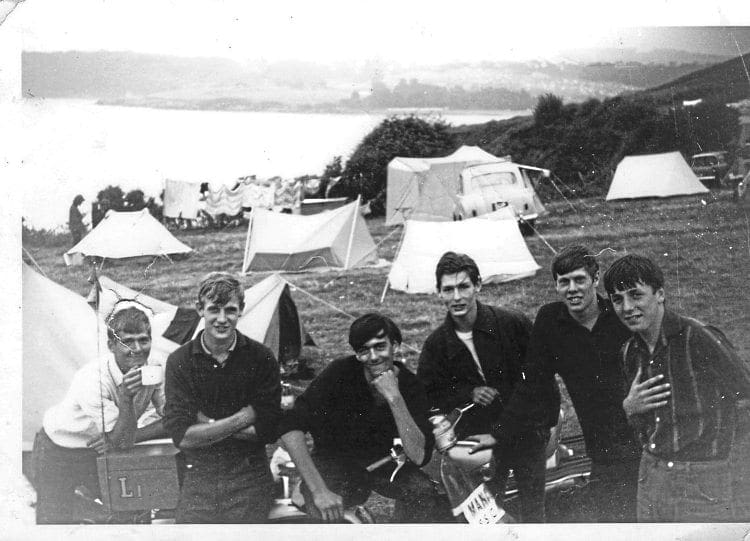 The week sped by and when it came time to leave we all set off together, hopeful that we would have a trouble free journey home — how wrong was I! As we descended Telegraph Hill above Exeter the heavens opened and my rear slick tyre was useless. The road was like a river and I was all over the place — how I avoided becoming another road traffic statistic I will never know. Thankfully the sun came out as we entered the village of Wellington but it did not shine on Phil; he suffered punctures to both front and rear tyres which made for a long and ‘tiring’ (pun intended) repair. Bridgewater beckoned and then the inevitable happened, the spark plug popped out of the cylinder head, irreparably damaging the helicoil. A dicey tow into Bristol by Dave ensued. We assured our pals that once the cylinder head coil was rethreaded everything would be fine and so we sent them on their way. 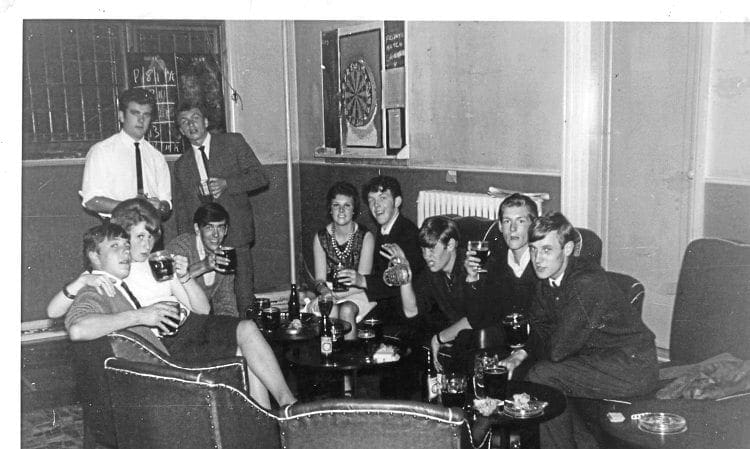 We eventually found a back street garage that fitted a new coil in the head. Afterwards the mechanic explained the reason why it had blown out; he said a long reach spark plug had been inserted instead of a short reach plug. When he asked why, I embarrassingly mumbled: “I bought it in a hurry.” As we left I heard him say: “What a plonker!” This was long before Del Boy — I didn’t turn around. 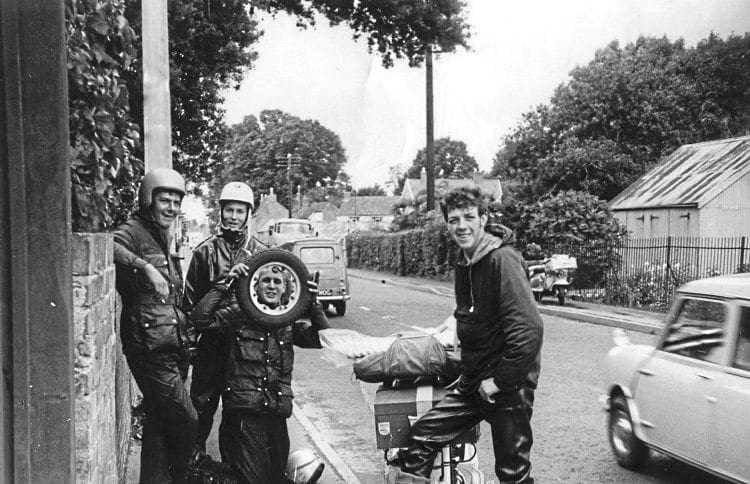 The cylinder head back in place and more importantly a new short reach spark plug fitted, we were on our way again. After a couple of near misses and becoming separated for a time, we arrived in Macclesfield when my scooter started playing up again. By now it was dark and poor Dave was knackered so I told him the problem was something or nothing and that I would have it fixed in no time. I thanked him for all his help and I sent him on his way. 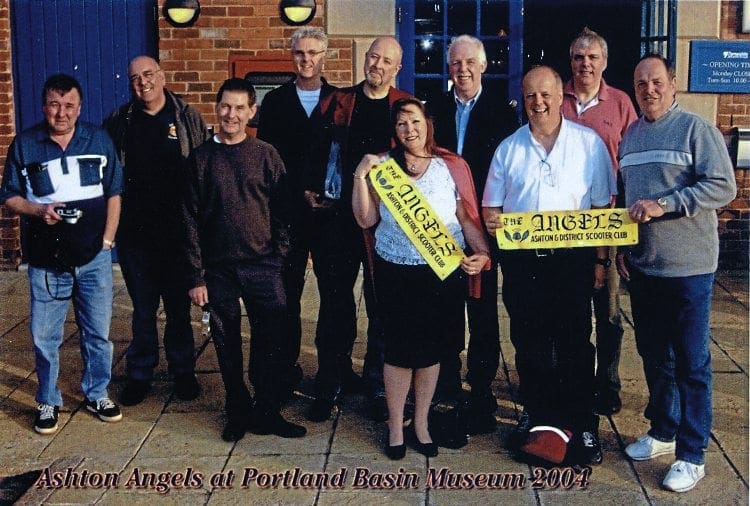 An hour later I’m still outside this posh terraced house with its raised garden and beds of flowers and the problem not sorted. By now I was feeling shattered, when a smart elderly couple then came to my rescue. They lived in the property and inquired about my well-being. I explained that I wasn’t sure what the problem was with my scooter and that I would have to continue to investigate. Without hesitation they suggested I stay the night and repair the scooter in the morning. I thanked them both on the understanding that I could ring an old friend to say where I was laying my head for the night. 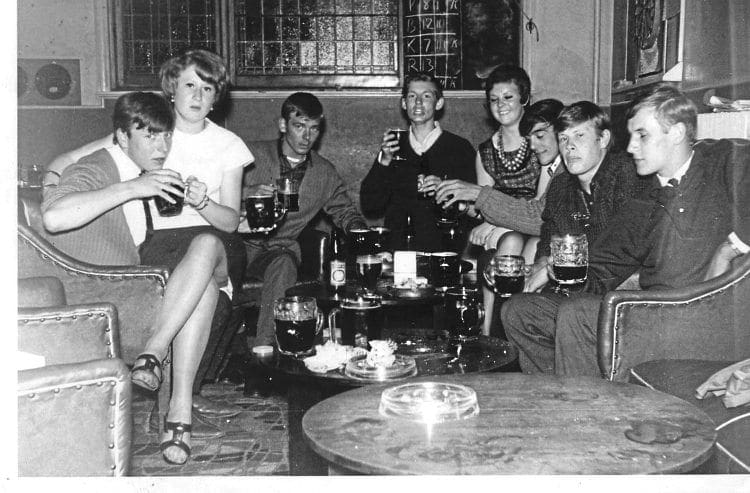 My reason for this was that the previous year a neighbour’s son had gone missing, and had not yet been found. I unloaded my worldly goods into their narrow hall then followed them up the street to one of their friends’ houses. The front door was ajar as we walked up the narrow path with loud music to be heard — a party was in progress! I stood there in the doorway in my Belstaff like a street urchin, my hands and face blackened by the various repairs of the day. I was introduced and used their phone to call my old friend Peter. I explained my situation and he said he had turned in for an early night and I had just woken him from a lovely dream with Brigette Bardot, he was not chuffed to say the least. 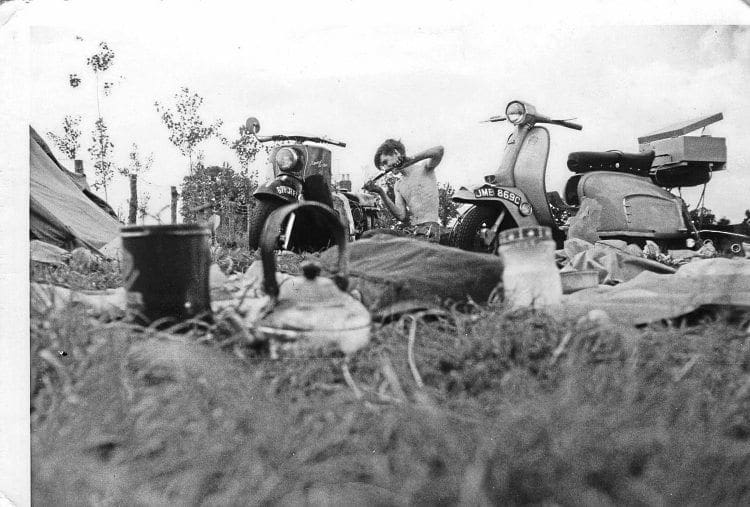 I replaced the received and turned around to find a plate piled high with sandwiches and a large beer being thrust in my direction. The hosts turned out to be directors of Macclesfield FC and I, being a keen follower of non-league football, entered into deep conversation discussing the merits of the non-league tiers of football that would eventually be adopted. I left the party well and truly sozzled, a hot bath was run for me and a double bed waited. 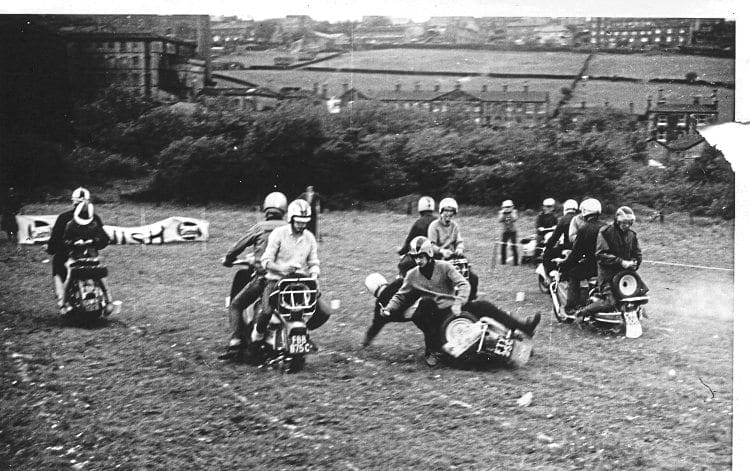 That night was the best night’s sleep of the week and my sunburn did not bother me in the slightest. In the morning I was awoken by a knock at the door followed by “breakfast in the dining room in 15 minutes.” I dressed quickly and found a full English awaiting me together with orange juice, toast and tea thrown in. 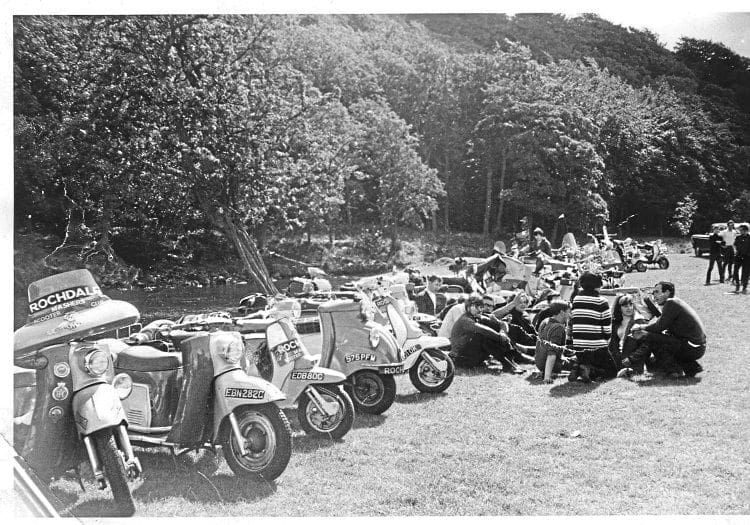 “We have to go to church,” said the gentleman apologetically, “Will you be able to fix your scooter?” He was most concerned. “I will take a look at it straight away,” I said. I emptied the hall of my gear and decided, now refreshed, I would check my scooter over systematically starting with the petrol tank. To my horror, the fuel tank was empty! I then realised, when I filled up the day before I had miscalculated the fuel and what with the various problems we had encountered I had forgotten to fill up near Kidderminster! “I don’t believe it,” I stammered, just like a modern day Victor Meldrew. What a plonker! I explained this situation away to the kind couple, with a little white lie: “I must have a hole in my tank — I seem to have lost all my fuel,” I told them. I saw a garage a couple of hundred yards away but sadly on closer inspection it was closed. I returned and said: “I will wait until it opens.” “Not to worry, I know the chap who owns it — he is a friend of mine,” replied the gentleman and trotted off, within minutes I was filling up with petrol and a shot of Red X. I thanked them all for their help and kindness. As I sped off I waved to the couple as they made their way to church, I said to myself, “Say one for me,” for my little white lie. 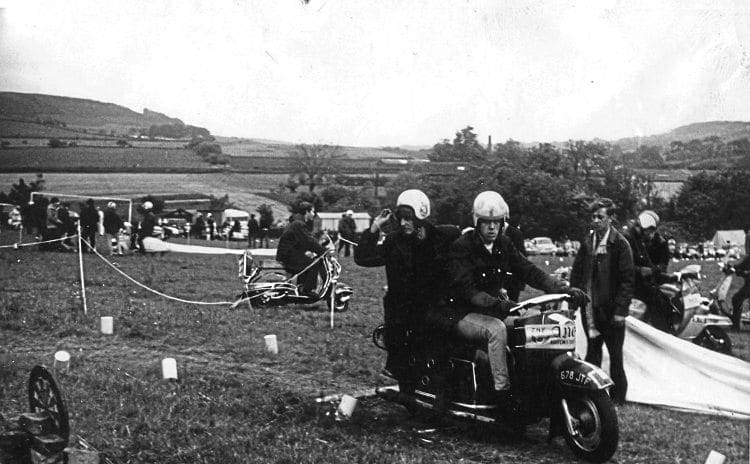 I was unloading my scooter when Dave arrived. He said he hadn’t slept all night, worrying that I might still be in Macclesfield sat at the side of the road or asleep in some hedgerow. When I explained what had gone on the night before; the party, the booze, the bed and breakfast, and the fuel, he lost it for a minute then burst out laughing: “You lucky b*****d!” he said. 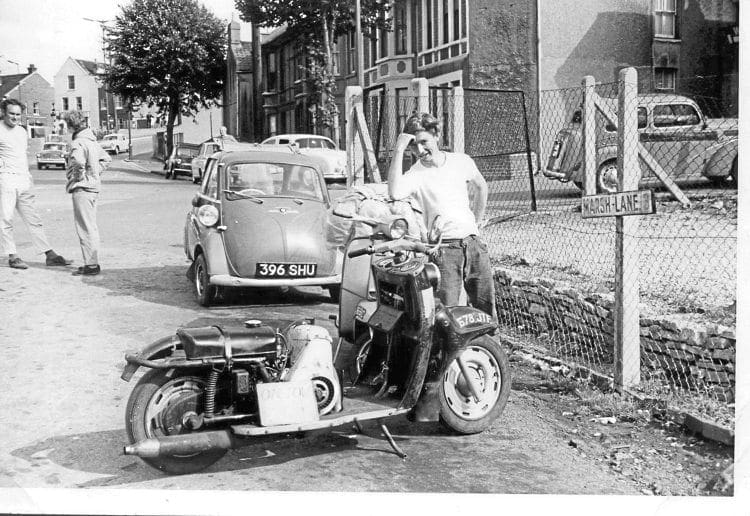 The following month, due to a fall out with those running the Mancunians, we set up our own club in Ashton-under-Lyne and became the Ashton Angels Scooter Club. 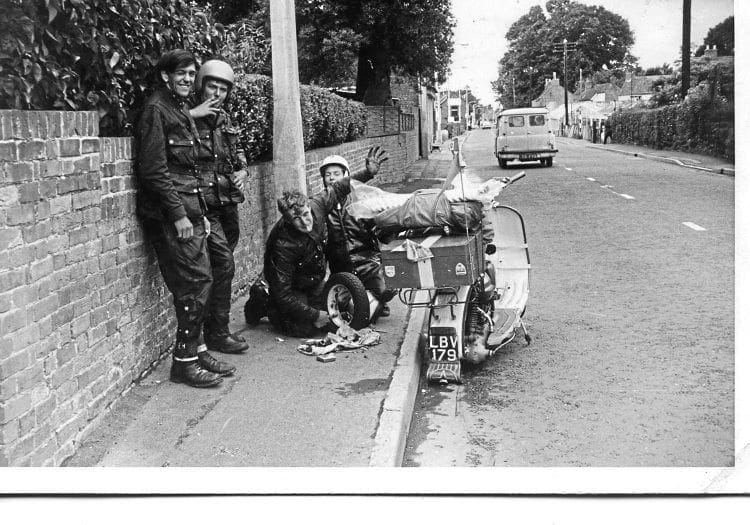 A sad twist to this story follows… the neighbour of mine, whose son disappeared, was Mr Kilbride. His son John was one of the victims of the Moors Murderers Ian Brady and Myra Hindley. The mother of my friend Peter, who I rang from Macclesfield, unfortunately became a victim of Hyde’s notorious GP Harold Shipman.