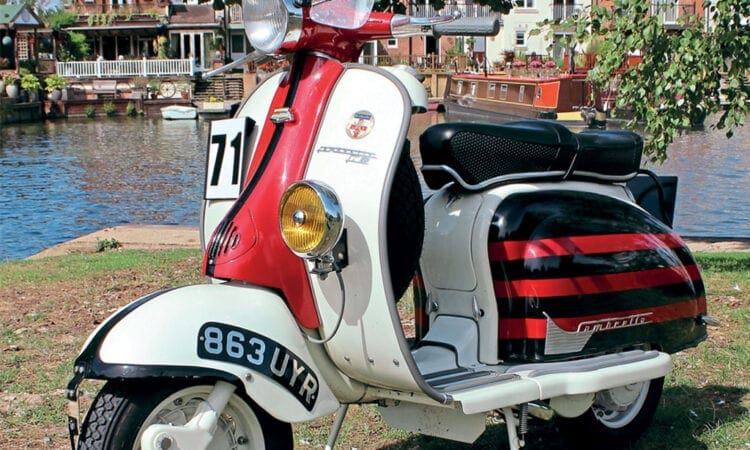 Question: What was the Lambretta model exclusively produced in the UK? Answer: the Rallymaster, produced by Lambretta Concessionaires at their Trojan works in Croydon.

Produced as opposed to manufactured, as the Rallymaster was created using Series 2 items with the addition of extras, some of which were absolutely unique to the Rallymaster.

Aimed at the enthusiast who wanted a scooter that was suitable for both everyday use on the highways and byways as well as giving the rider a machine tailored to be competitive in the then-fledgling but rapidly growing scooter sports events in the UK.

With the new slim style Series 3 Lambrettas due to become available towards the end of ‘61, the Rallymaster was a clever commercial ploy, one of many implemented by Concessionaires, to sell soon to be surplus Series 2 scooters to an at the time growing niche market.

Some 25 years or so ago Lambretta enthusiast, owner and avid memorabilia collector James King visited the Lambretta museum in Weston-super-Mare for the first time.

At that time it was under the curatorship of Nigel Cox, while pretty much all the machines and items on display captivated James’ interest, one particular scooter stood out in front of all the others. Which of course happened to be a stunning example of the Lambretta Concessionaires-produced Rallymaster.

Man on a mission

James is the kind of chap who, if something captures his attention, will embark on a one-man mission to painstakingly research every snippet of available information. A personal quest to try and quench his insatiable thirst for knowledge on the given subject.

He visited award-winning British motorcycle champion rider Sammy Miller’s museum in Hampshire, which has many examples of classic competition motorcycles on permanent display.

The reason for James’ visit was to speak to Sammy Miller about the handful of times in the very early 60s when Sammy competed against Alan Kimber on both the Rallymaster prototype as well as a version of the production Rallymaster. Seriously thorough and intense research that goes way over and beyond the realms of all but the obsessed!

With his interest in the Lambretta Rallymaster transforming into a compulsive obsession James, not satisfied with amassing a collection of printed information on the subject, began sourcing Rallymaster parts.

This culminated in 2015 with the purchase of a Series 2 # Lambretta frame with a large box of accompanying parts with a view to building himself a Rallymaster replica.

“During the years I began collecting genuine Rallymaster accessories and extras, I was offered a set of Series 2 forks, with a price tag way above the then average price for the ‘standard’ Series 2 Lammy forks. This particular set of forks were stamped with the letters A K and claimed to be a spare set provided by Concessionaires for Alan Kimber.

“Personally, I wasn’t convinced as to whether they were genuinely what was being claimed by the seller. With nothing in the way of provenance to confirm the claim, I declined the opportunity to buy those particular forks, tempting though it was, I wasn’t convinced.”

Disco Des was the main man at Gran Sport in Birmingham for some years, after selling up and moving abroad for a short time, he returned to the UK. He initially worked for a couple of outlets before, almost inevitably, starting up a new scooter business himself.

James had built a good personal relationship with Disco Des, so when the time came to physically build what would become his Rallymaster replica, James enlisted the talents, skills, and know-how of his good friend. Which proved to be a master stroke, as the paintwork, assembly and fitting of all the extras to the frame was turned round in a very reasonable timespan.

James said: “Most of the frame, fittings and body panels were painted already when I got them; those that weren’t, including the legshields which did need quite a lot of attention, went off to be painted by a local sprayer who Disco Des employs for all the remarkable restorations he does.

“My initial intention, once I’d decided to build a Rallymaster, was to create an exact replica of the Rallymaster that I first saw in the Lambretta museum in Weston-super-Mare all those years ago.

“This would have included the competition number 127 in the holders; I decided instead to have my Rallymaster a bit more personalised to me, which is why I went for the number 71 on mine.

“Genuine original Rallymaster accessories were, in the main, not too hard to find, some of them at a price, for the few bits and pieces that proved either too hard to find or way beyond my price range, I obtained accurate remade replicas of the original parts.

“Remade copy of the Pegasus dual seat came from Rimini Scooter Centre, Keith at K2 Customs provided the remade GB number plate and perspex flyscreen. The base scooter my Rallymaster replica was built on is a 1960 LI Series 2 125 frame.”

Stating the obvious, road conditions along with riding styles in the 1960s were vastly different from the conditions and approaches to riding in current times.

Going back over 50 years, the very first motorway, the M1 had opened. It seems that some things never change; around the time of Britain’s first motorway opening, the Daily Mail newspaper proclaimed that motorways were not intended for use by scooters.

Putting that ridiculous, unsubstantiated claim in the bin, Lambretta Concessionaires demonstrated the error of the Daily Mail’s claim, by dispatching some items from their spares department in London, on a brand new LI 150 Series 2, to a dealer in Coventry via the M1.

The journey was completed in under two hours, with an accurately recorded average speed on the motorway of 54.9mph. The rider of the Series 2 LI150 was Brian Gibbs, who shortly after his motorway achievement was tasked with the job of chief Rallymaster tester by Concessionaires. With an eye on practicalities for regular road use, balanced against authenticity James, with input and advice from Disco Des, eventually opted for practicality.

A Series 3 LI150 Lammy engine, fitted with a GT186 top end kit, provides the power for his Rallymaster replica. “It would have been nice to have had a Series 2 LI 150 engine with the close ratio gearbox offered as an optional extra on new Rallymasters.

“The close ratio gearbox wasn’t as some claim a specially made gear set. It was created by using first and second gear cogs from a Series 2 LI125, while third and fourth gear cogs were as fitted standard to Series 2 LI150s. I’ve got the full Smiths rev counter setup and as well as the rev counter itself I also have a slotted front sprocket cush drive bolt and drive cable, both brand new old stock still boxed.

“My intention was and maybe still is at some point, to have a side casing modified to allow the rev counter and drive to work as originally intended. What swung choosing the GT186 kit on a Series 3 150 engine was the excellent reputation the kit has from years of being tried and tested by many scooterists.

“It’s proved to be a very reliable engine setup for me, giving me plenty of torque and power. Besides which, I’m still not certain as to what the Stage 2 tuned engine as provided on original Rallymaster engines actually means. It sounds good, which I think was probably the intention back in ’61.”

Despite all the available knowledge in circulation, including a wealth of previously unseen documents in Stuart Owen’s excellent book Lambretta Concessionaires, The Complete Story, exactly how many Rallymasters in total were produced at The Trojan works remains something of a mystery.

Closest to any official information, although not backed up by any unquestionable documented proof, is contained within a Rallymaster article in Scootering’s April 2008 issue. Featured scooter was a Rallymaster replica, built by Terry Crook, who had owned a genuine Rallymaster in the early 60s.

Within that article, at one point he remembers taking his original Rallymaster to the workshop at Trojan works for a running repair. When collecting his Rallymaster Terry recalls a conversation with a Concessionaires technician who informed him that he thought “only 100 examples of the ‘red’ Rallymaster and 40 of the ‘blue’ variant had been made”.

There are probably more Rallymaster replicas currently in existence than there were genuine Rallymaster Lambrettas made. Most Lambretta Innocenti scooter models are generally identifiable by VIN frame numbers allocated to production runs, because the Rallymaster was in reality a way to offload end of range Series 2 scooters, to make way for the incoming Series 3 Slimstyle Lambretta’s arrival.

A similar sales ploy was also used to shift a number of Series 3 scooters some years down the line with the Golden and Silver specials, consisting of a legshield badge and an all over respray to drum up sales for end of range models.

Currently, there doesn’t appear to be a definitive way to authenticate, or not, whether a 1960 or ’61 UK registered Series 2 LI150 was or wasn’t a Concessionaires created Rallymaster. That isn’t to say that the situation will remain the same in the future, as information is constantly being discovered and shared.

Since the photo shoot for this feature, James has had a change in personal circumstances, which sadly for him meant reluctantly offering his Rallymaster replica for sale. Obviously it not only attracted attention it was sold in a day or so after going on the market.

Final words from James, “I’m sorry to see it go, but needs must. It has been an absolute joy to ride and own, as well as building it and sourcing all the various accessories and parts. It will be an honour to see it on display in the museum.”