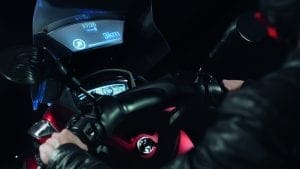 There’s no mention yet of when you can buy this sort of thing – but Samsung has revealed a live, smart-phone enabled heads-up windshield for motorcycling, and the set-up has been shown on a Yamaha Tricity scooter in Milan. We’ve got the first look at the video of the system for you to see at the bottom of this story.

Samsung says that the project was conceived in order to raise awareness among young riders in Italy about the important issue of road safety on two-wheeled vehicles. 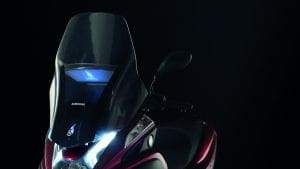 Recent figures from the Italian National Statistics Institute related to road accidents indicate that some scooter incidents are caused by inappropriate use of smart phones. According to the latest ACI/ISTAT data, 24% of young (18-24) Italians – Italy is the top European country for registered scooters – have admitted to using their smart phones while riding. The youngsters have a desire to stay connected with their community while riding their two-wheeled vehicles which of course is both dangerous for them as well as jeopardizing other people’s safety. 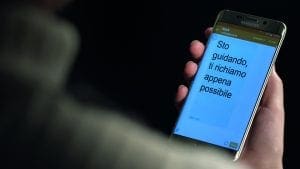 Operating as a second display, the Samsung Smart Windshield concept allows riders to access the information received on their smart phone through a dedicated App: incoming calls, SMS and WhatsApp messages, email and other notifications could be viewed directly on this smart windscreen. The rider can then make a choice as to whether to stop in order to answer or just to send an automatic reply message whilst leaving their phone safely stored in a pocket or under the scooter seat.

Here’s the video of the concept in action: