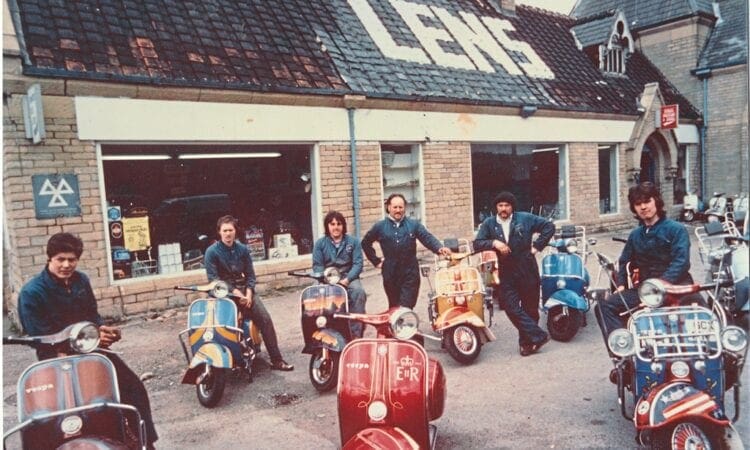 As temperatures soared to record levels, Stan joined the crowds who gathered to say goodbye to Lens of Shipley.

Most readers will have fond memories of their local scooter shop – spending Saturday afternoons in the company of like-minded people, coveting the latest accessories and dreaming about buying a new scooter.

The shop in question may have been Eddy Grimstead’s, Arthur Francis’ or Taffspeed, but for Bradford-based scooterists there was only one dealer worthy of the name – Lens of Shipley.

Founded in the late 1950s, Lens grew to be a truly iconic brand. Although best known for its dealer specials, Lens was much more than a one-trick pony. Looking at the neglected Victorian building today it’s hard to imagine that it once housed one of the UK’s largest Vespa dealerships.

“Len always said he had two ambitions,” said Ray Stansfield, who worked at the shop as a mechanic for 23 years. “The first was to retire at 40 and the second was to own a Rolls Royce. He delayed retirement until he was 41, by which time he was on his third Roller.”

When Douglas Vespa wanted something special to commemorate the Queen’s Silver Jubilee in 1977, it was to Lens that they turned. “We actually built three of the Silver Jubilee Specials,” explained Ray.

“One for the Earl’s Court Show and two others for general marketing.”

One of Lens’ regular customers was Antony ‘Buzz’ Beaumont, now owner of Halifax’s Buzzsolomoto. “It was a local institution,” he began.

“We’d hang around on a Saturday making a nuisance of ourselves, but the staff never seemed to mind. Lens was more than just a shop, there were events on the site and competition in the annual custom show was fierce.”

Never afraid to innovate, in the days before credit was widely available Lens introduced its own ‘credit card’. With a limit of £300 and a strict enforcement of weekly repayments, it enabled loyal customers to buy the latest tuning parts or accessories.

Loyalty was, of course, rewarded by sales and the new ‘V’ registrations on August 1, 1979 saw the shop’s busiest day ever.

“It’s hard to imagine now,” said Buzz, “but on that day 150 scooters were registered to customers at Lens.” It’s a day that Ray also clearly remembers.

“It wasn’t unusual for us to get Vespas delivered in batches of 50 or 80 at a time, but that year was special. There are cellars and passageways under the building and we’d often store scooters down there, but in 1979 we were begging for lock-up spaces in town and even stored quite a few in the open air.”

After the heyday of the Mod revival the shop’s fortunes slowly declined and by the early 1990s it was a business in decline.

If it could have held on for a few more years, Lens may have ridden on to the crest of another wave when scooterists began returning to the scene, but in June 1992 the shop closed its doors and as far as everyone was concerned that was the end of scootering on the site.

“The old shop’s had several owners over the years and been put to different uses,”said Ash of Shipley S.C.

“When we discovered there were plans to convert the site into flats we knew the site would change forever.” Seizing the opportunity another club member, Max Gibson-Ree, made it a personal mission to hold some sort of commemoration event.

“I’d like to say a big thank you to the new owner Simon Hart-Woods,” said Max “He’s no real interest in scooters, but once I explained the site’s history he was keen to help out. He’s opened the site to us and even allowed a few scooters inside to recreate the showroom. Obviously once we got the keys the building was scoured for souvenirs, but unfortunately found nothing other than a few bolts!”

On Saturday, June 29, Shipley S.C. hosted a final event on the site. They hoped that a few dozen enthusiasts might attend, but thanks to the outstanding weather, numbers wildly exceeded expectations, with at least 200 scooterists enjoying the atmosphere and parking was at a premium.

Although the event was free to enter, the Yorkshire Air Ambulance was on site and collected £1,268.
At around 5pm the final scooter rode away, the gate closed behind it and the keys were handed back to the current owners. It was the end of an era. Lens of Shipley, gone but not forgotten.