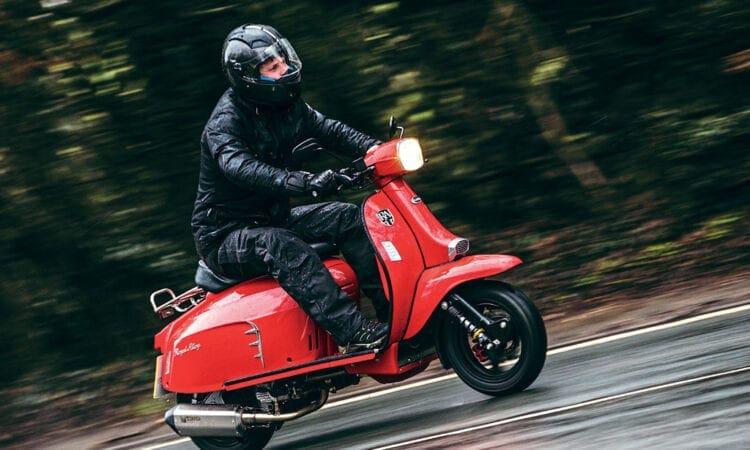 Can an auto scooter ever be described as having character? We rode Royal Alloy’s GT200 in an attempt to find out.

Some enthusiasts may still struggle with the concept of four-stroke autos, but there’s no doubt that they’ve become an integral part of the rally scene.

A common complaint is that the autos lack character, something that Royal Alloy are doing their best to dispel. Although the metal-bodied GP was launched last year and there’s genuine promise of a 300cc version before too long, it was the GT that brought the brand to the attention of British scooterists.

Currently available in 125 and 200cc versions, the GT will soon be joined by a 50cc model, which it is hoped will attract younger riders.

Historically, it’s the 200cc class that’s been most important to rally going scooterists, and it was the liquid-cooled GT200 that was waiting for Dan and I to test ride on a bitterly cold day at the end of January.

First impressions of the GT were good. Both paint and metal finishes are lustrous and shut lines are neat. The demonstrator was fitted with a Scorpion exhaust and this, combined with the colour-coded air scoop, gave the machine a rakish, sporty appearance, which is emphasised when placed on the side stand.

Once aboard, I found the seat height and position to be comfortable, but could see how shorter riders may find tiptoes necessary when off the stand.

The controls were well laid out and fell to hand easily, though I’d later discover that I was constantly failing to switch off the indicators. Whether that was due to the button’s action or the fact that I was getting used to new gloves, I’m not sure.

With a prod of the starter the engine burst into life, and I was surprised at the Scorpion’s exhaust note. It’s agricultural, but not in a bad way.

I rode Honda 500 singles during my motorcycle years, and as it sat with its engine ticking over, the RA200 reminded me of the Honda’s strong, solid thump. It certainly sounded larger than the engine’s actual 181cc capacity.

As I pulled away, I was reminded that the advantages of plastic bodies aren’t restricted to cost and, being rust-free, they’re also light. With a stated output of 12.6w (16.9bhp) the RA’s 4 valve, liquid-cooled engine offers an excellent power-to-weight ratio.

Acceleration is swift and despite carrying my bulk, the motor had enough torque to make light work of hills. Even though it was snowing heavily, the opportunity of trying out the handling on a scooter I won’t have to repair should it all go wrong, was too good to miss.

To anyone who’s ridden a Lambretta, the RA is reassuringly familiar. It feels like a small, tightly put together package and just like my GP, I have to be careful of getting my knees caught on the handlebars. The similarities don’t end there.

The ride is slightly skittish, not dangerous, not uncontrollable, but there’s just enough feedback to let the rider know that the machine’s cooperation shouldn’t be taken for granted.

It’s a scooter that needs rider input, and it rewards that attention with a big grin factor. It’s convincing enough that I stopped myself going for a gear change on more than one occasion, although the Scorpion’s exhaust note, so attractive at first, could become as irritating on a long run as an expansion chamber!

With the promise of low maintenance and low fuel consumption, the GT200’s retail price tag of £3,799 makes it an attractive proposition, particularly for those wanting classic looks without all the maintenance hassles of 1950’s technology.

Some riders will never be won over, but everyone should give the GT a chance. In my opinion, no four-stroke will ever exude the personality of a well-set-up two-stroke, but Royal Alloy’s GT comes very close.