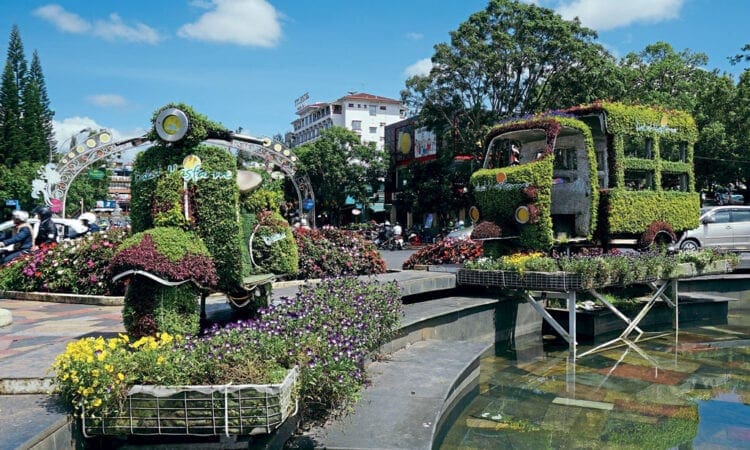 Last month we left our gang of explorers exhausted and with 1,000 miles still left to travel. Could they bring themselves to leave Da Lat, Vietnam’s prettiest town?

Situated in the Low Highlands, around 1500 metres above sea level, Da Lat is one of Vietnam’s hidden gems. Originally developed by the French as a summer retreat from the heat of Saigon, it has a relaxed, continental feel.

An unspoken agreement during the ‘American War’ meant it was spared from combat. Top officials from both sides rented villas in the town to rest from combat, routinely turning a blind eye to their enemy’s presence.

Today it’s Vietnam’s most romantic town and host to innumerable honeymooning couples. It’s also coffee growing country and there’s a coffee shop on every corner. More importantly for me, it also has a busy market with an excellent cobbler.

I’ve worn Magnum boots on my trips for years as I find them to be a good compromise between a walking and riding boot. They’ve always given me good service, but the humidity killed the pair I’d brought with me.

For a couple of days I’d been walking around with soles flapping like Charlie Chaplain’s tramp and it was a relief to get them stitched properly. It’s a measure of how cheap labour is in Vietnam that the repair cost less than the iced coffee I drank whilst waiting.

The Road from Da Lat produced a sight that I never expected to see in Vietnam… pine forests. They’re only found in a few places and made a welcome change from the relentless jungle we’d been riding through. The scenery was so Alpine that I wouldn’t have been at all surprised to find a ski lodge around the next corner.

Today was our first true experience of Vietnamese mountain roads and the Khanh Le Pass didn’t disappoint. The pass runs for 18 miles, peaking at 5200 feet (1600m) above sea level, and for once not only was the road surface excellent, but the sweeping curves also gave plenty of time for planning. It was huge fun, right to the point when Christian misjudged a corner.

Road furniture in Vietnam isn’t exactly designed with safety in mind. Concrete posts mark the edge of the road and road signs are mounted on scaffold poles that have been cemented into the floor. By some miracle, not only did Christian manage to thread his way through this obstacle course, but he also managed to dump the PX before falling into a concrete drainage ditch.

Incredibly, he emerged with a few scrapes, some bruises and dented pride. The PX had also faired quite well and now carried some battle scars that included a cracked headset top.

Little did we realise that there was a timebomb ticking in another one of the scooters, one that grew worse with every mile that passed.

We checked into our 4* hotel in Nah Trang, secure in the knowledge that this was holiday time. A rest day had been built into the schedule and a boat trip was planned for the following day.

For our mechanic, Chua, it was an opportunity to cast an eye over the scooters. Over the preceding days, Pete’s Series 2 had become increasingly difficult to start and Chua was on a mission to determine why.

Having slaked down the day’s dust with a beer or two, we returned to find Chua in an uncharacteristically bad mood. His investigations had revealed that even though Pete couldn’t remember it happening, at some point his engine had suffered a soft seize. The seize had cracked a ring, which had exited the exhaust port without causing any damage.

Faced with an increasing workload the other ring had done its best, but was now bleeding so much compression that starting was all but impossible.

When Pat told him to use the replacement rings he’d packed for this eventuality, the reason for Chua’s bad mood became apparent – he’d broken the rings trying to replace them

Anyone who meets Pat instantly realises one thing, he’s a perfectionist. Packed in the back-up van was a spare engine. It would be a late finish, but Chua could swop over the top end and Pete would soon be back on the road. As we prepared for dinner, Pete mentioned that the tyre pressures needed checking as the rear end was wallowing.

The next morning found Chua was in an even worse mood. There was nothing wrong with the tyre pressures, but there was a problem. At some point, possibly during our off-road experience, the rear hub bearing had taken a knock.The initial damage hadn’t been terminal, but it had created some undesirable movement in the gearbox, and in turn this had damaged the endplate bearing.

As Chua sat in the underground car park with a Lambretta engine in pieces, it was clear that he wasn’t going on a boat trip. The easiest solution was to transplant the spare engine. From now on Pete would be riding an Imola-powered unit.

Reluctant Farewell: Nha Trang to Hoi An via Quang Ngai

Every trip has its low point and ours came in Quang Ngai. As his roommate, I knew that Andy hadn’t been happy for a few days. He’d fallen in love with Vietnam, but for various reasons the ride wasn’t for him.

There were mixed emotions as we said our goodbyes. We realised that there was no point in him continuing with the trip and being unhappy, but we certainly did not want to lose him either.

There was also a more practical concern as we now had more Scooters than riders. The obvious solution was to freight the PX Christian had damaged back to Saigon by train, but we couldn’t do that until reaching Hoi An.

Stepping up the plate was Linh. I’d ridden behind her in Saigon and knew that she could handle an auto in city traffic, but a PX on Vietnamese highways was an entirely different matter.

As the least confident rider she took the lead, and other than slightly reducing our average speed, she performed like a pro. I know plenty of experienced riders who’d have passed on the challenge, but Linh cemented her place in our hall of fame.

Just outside Hoi An, we rode through the most surreal landscape I’ve ever encountered. With the exception of one ‘Z’ bend, the road ran arrow straight for 15 miles. On either side of the road stretched a Buddhist cemetery, with the never-ending parade of graves made all the more eerie by a coating of pure white sand that gave the appearance of snow.

Just as things couldn’t get any stranger, the graveyard came to an end outside a newly-built amusement park. It was open, and if we’d been able to spare the time we could have had the run of the place. Other than the staff, it was completely deserted.

We were greeted at Hoi An by Brad, an enthusiastic PX owner who’d made the town his temporary home. For once, Pat’s promise of an easy day’s riding had been fulfilled, and as we relaxed over lunch by the river, Brad asked about our plans.

As we outlined the route we were to take and the places we intended to visit, Brad’s face grew puzzled. “You do realise that you haven’t got time to do all of that don’t you?” he asked.

Just like the blokes off the telly, we’d miscalculated. We could ride the country or see the country, but not both. We had a very difficult choice to make….