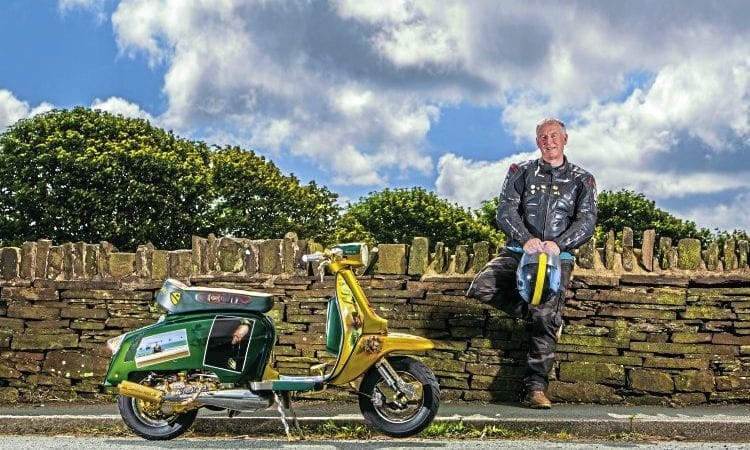 Dave Hamilton of Bradford Night Owls SC watched the film Apocalypse Now in 1979. He didn’t realise it at the time but he would be so inspired by it that it would form the basis for a custom scooter he would start to build in 2008.

While looking for a suitable GP Lambretta to support his custom scooter project in 2008, Dave came across one such model advertised as a barn find in Pickering, North Yorkshire. The scooter was a bargain at £900 and having borrowed £500 from his brother he went over to Pickering with him in a van to get it. Dave paid for the GP and they got it into the four-wheeler. On their way home Dave’s brother explained his opinion of the purchase to Dave saying: “What have you done!? It’s pile of shite! I wouldn’t pull it out of a skip!” Dave said: “I had to agree. It looked like it had been dragged out of a river, it was a proper mess, but it was exactly what I wanted. The scooter was 100% original and originality was one of the main priorities on my list. The engine and frame numbers matched and the panels were all correct. I’d got the blank canvas I wanted to work from.”

Dave always had the desire to complete a no-holds-barred custom scooter and prior to his final choice he’d considered several themes, Dave said: “I thought about various album covers and I’d thought about various bands and movies. Apocalypse Now was a movie I’d seen back in 1979 and it’d stayed with me. The drama, the characters, the phrases and the action, I knew it was right path to follow; the options were endless.”

Dave started stripping the scooter and commissioned Grant Hood to complete the initial paintwork and base coats. Dave said: “Before I choose any specialist or any parts I like to have a good look round. I like to explore all the available options and I eventually work out what suits me best for the matter I’m trying to deal with.”

As the rebuild developed the whole concept of Dave’s planning and choices was beginning to come together. Dave said: “I wanted to create a blend of murals, and phrases from the film, which were supported with similar engraved features on the scooter. I wanted it to be a custom scooter, which you’d walk round and you’d develop the picture of the theme as you looked at it, and the longer you looked at it the more features you’d begin to see.

“It was critical to get the right blend of the story around the scooter and everything had to match up accurately.” Dave commissioned Adi Clark to complete the engraving work and Dave explained how Adi’s eye for accuracy had supported him with this. Dave said: “There were a couple of examples where I’d had ideas which were slightly off the mark. One was where I’d asked Adi to engrave corpses hanging from the trees on the forks, which depicts a scene in the movie at Kurtz’s colony. Adi took the idea away, had a look at it and told me that it wouldn’t work because we’d lose the detail, so I scrapped the idea and went with Adi’s alternative suggestion. Another was when Adi told me he’d been researching what various types of barbed wire there were because he wanted to make sure he engraved the right type of barbed wire onto the scooter to keep the accuracy of the theme.”

The base coat at the front of the scooter is metallic gold candy. The base coat at the rear and on the side-panels is metallic green candy. The green represents the humidity of the Vietnam Jungle, and the gold candy represents bomb explosions and landing zone flares. Once you’ve been drawn into the theme by the base coats the fantastic murals of Grant Hood, Colin Fitzgerald and Ty Lawer take you into the movie itself. The front of the legshields reveal murals of Marlon Brando’s character Colonel Kurtz and Lt Colonel Kilgore in the classic ‘surf or die’ scene. On the right side-panel there is ghosted image of Lt Colonel Kilgore set between the Air Cavalry’s attack formation and another menacing image of Kurtz. On the left-side panel there is a ghosted side profile image of Captain Willard and several ‘Huey’ helicopters set between murals of Lt Colonel Kilgore’s deployment from his helicopter, ‘Death from Above’, and Lance B Johnson in the patrol boat’s twin 50 cal gun position. The sharp shine of the chrome gives the feel of the sun glistening on the Nung River and the gold plated metalwork around the scooter supports the flashes of explosions.

I asked Dave about the paintwork on the inside of the legshields. He said: “I knew exactly what I wanted on the tool box door but I gave Grant carte blanche on the rest of the inside area. Grant came up with this idea, which is a map showing the Nung River, which Willard travelled up in his mission to track Kurtz down, we both agreed it worked.” Dave went on to explain that this was another example where the specialists he’d commissioned to work with him had done their research into the theme and positively contributed, developing their ideas into the scooter.

Since the original engine build, Dave has upgraded to an RB20 kit with a Wossner piston. The scooter’s pretty keen on fuel so Dave had the foresight to fit it with a 17 litre long-range petrol tank. Under the headset is a brass kit by MB Scooters, and a Taffspeed upper steering bearing. Explaining the brass kit and the steering bearing Dave said: “The brass kit improves the gear changes and increases the response to the throttle by so much you wouldn’t believe! And the upper steering bearing improves the whole integrity of the ride.” The existing flywheel cover is a one off item, which has the swords of the Air Cavalry running across it. However, Dave explained that he intends to replace this with a Casa mag flange flywheel kit.

The number of features Dave has developed into this scooter is unbelievable. Dave’s mission was to produce a top-end custom scooter, and he found his inspiration for its theme from a film he was passionate about. His passion drove him to think carefully about every step he’s taken with the development of ‘Apocalypse’. He did his research and kept his focus. He wanted the scooter to be one which you’d walk round and it would immerse you in its theme and that is what happens with ‘Apocalypse’.

Name: Dave Hamilton
Scooter club: Bradford Night Owls.
How and when did you first become interested in scooters: 1979, when I was 16-17 years old I watched Quadrophenia and that set things going.
First scooter: Lambretta GP200 purchased in Bradford for £200 in 1979.
Favourite scooter model: Lambretta GP. I love the lines and the shape.
First rally or event: Scarborough 1980.
How did you get there? Vespa P200E.

What is your funniest experience with a scooter? In 2014 we were going to the Scarborough National Rally when we got stuck in a traffic jam on the A64. Me and my mates pulled out to the right and filtered through the line of traffic. We’d got about two miles when we realised one of our group was missing. We pulled in and eventually, two pints later he caught us up. The problem was that his scooter was loaded up with lights and mirrors and he couldn’t squeeze through the gap between the cars!
What do you like about rallies/events? The music, the scooters, the people and the craic in general!
What do you dislike about rallies/events? Moaners!
What’s your favourite Scootering magazine feature: Custom scooter pages and technical tips.
Your favourite custom/featured scooter of all time: ‘Spirit Walker’.

Released in 1979 Francis Ford Coppola’s classic cult movie Apocalypse Now explores the madness and moral dilemmas of the Vietnam War. Captain Willard (Martin Sheen) is an American Special Forces officer who is sent on a secret mission to kill the renegade Colonel Kurtz (Marlon Brando). Kurtz has gone off the rails and has surrounded himself with brainwashed natives in a jungle fortress. Willard’s journey up the Nung River brings him into numerous situations, one of which is contact with the bloodthirsty, battle-hardened, surf loving Lt Colonel Kilgore (Robert Duvall).

From 1965 to 1973, the Bell UH-1, officially named ‘Iroquois’ and nicknamed ‘Huey’ was the most common utility helicopter used in Vietnam.

Typical armament included two M-60D machine guns on fixed door mounts manned by the crew chief on the left and a door gunner on the right. The M-60D is a 7.62mm calibre weapon, which fires approximately 600 to 700 rounds per minute. The large ammunition box magazines below the M-60s could hold roughly 2000 rounds of linked 7.62mm ammunition, and were a typical field modification replacing the authorized ‘can’ which held just 500 rounds.