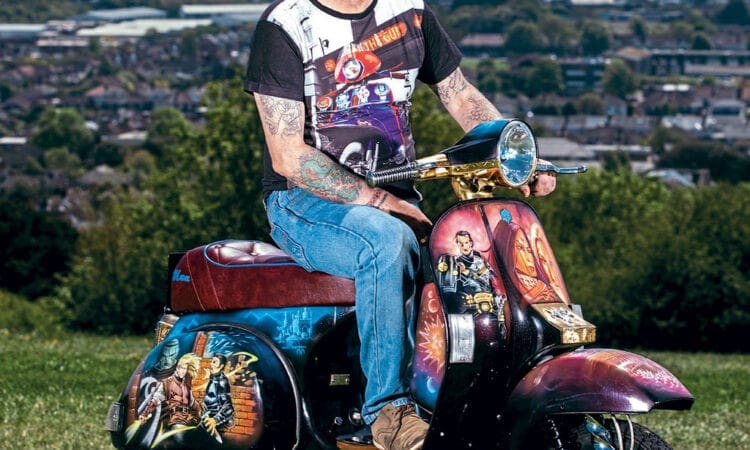 Some scooters live fast and die young while others are reworked and reborn. Martin Reeve’s Destiny of a Legend is definitely one of the latter.

Bought for the princely sum of £495 back in 1992, this PX has been in the hands of Havant- based Martin Reeves ever since.

Anyone who remembers the scooter from ’92 would struggle to recognise it today. In fact anyone who saw it back in ’98 would need a good memory for registration numbers as the colours it now wears represent its third incarnation as a full-blown custom.

First featured in the Oct ‘96 edition of Scootering, Destiny of a Legend was then green with typical 1990s’ fantasy murals. Plenty of bare flesh and dragons, happy days! Although ‘Destiny’ featured plenty of chrome and engraving it set itself apart with, wait for it, a wooden floor.

This was the result of days spent steam-moulding the wooden sheets, a process that was more technically complicated than casual observers might appreciate. Fast forward a few years and Destiny was reborn, this time in red.

Once again fantasy murals were very much in evidence although with less bare flesh. The wooden floor was dispensed with as were the Vespa’s characteristic panel seams.

Believing that he’d taken the project to its ultimate conclusion, Martin announced in 2000 he was selling Destiny and had already bought a P200E that was earmarked for his next project. Thankfully, a new buyer never materialised and after a few years in storage Destiny was once again stripped for a new scheme.

Although the fantasy theme remains it’s now very contemporary, finding inspiration in the world of animation rather than Tolkien. Incredibly, several parts have survived, the twisted forks being a notable example.

Other threads that run through each build are those responsible for paint, namely Si Clark and engraving, with Adi Clarke’s work proving to be timeless.

When a scooter stays in the same hands for several decades it’s understandable for owners to fall into the trap of freezing it in a moment of time. In contrast Martin has allowed Destiny to evolve, adapting it to contemporary tastes. The result is a true classic, perhaps even a legend?