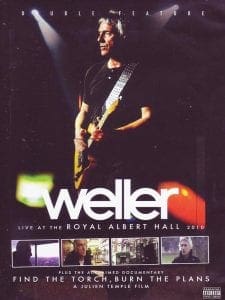 For Weller fans, and indeed music fans in general, this double disc package is yet another desirable piece of musical entertainment from the Modfather, this time both visually as well as aurally.

The DVD disc contains a full 26 track set from one of his five nights at the Royal Albert Hall in London. Drawing from old and new the list includes Eton Rifles, That’s Entertainment (both featuring Kelly Jones from the Stereophonics) and Strangetown from his Jam days, and it was interesting seeing Andy Crofts from The Moons (Weller’s keyboards player) take lead vocals for Art School. Then there’s Fast Car Slow Traffic, Wake Up The Nation and Aim High from his latest album, as well as From The Floorboards Up, You Do Something To Me, Shout To The Top, Wild Wood, Come On Let’s Go and Butterfly Collector covering the bits in between. And if you were at the show you may even see yourself in some of the footage too.

The DVD also includes the promo video for 7 & 3 Is The Striker’s Name, as well as the film Find The Torch, Burn The Plans directed by Julian Temple, who was also behind the Sex Pistols’ Rock ‘n’ Roll Swindle film, and more recently the short film accompanying Madness’ latest album, the Liberty of Norton Folgate. It’s a documentary not just about Weller, his album and the songs on it but also life in London, the place Weller has lived since leaving Woking in Surrey. From closing market stalls to fish and chips, cabbies and young mods it is (maybe surprisingly) an interesting 50 minutes or so, although I do come from London… In fact, the press release statement of the film being “a portrait” of Weller is a pretty good description.

And so the CD, which after all that may seem a little lacklustre, but having watched Weller and his band performing live on the screen (and the current line-up looks comfortable, stylish and seem to be enjoying it more today than any previous line up for a while – a real band rather than simply talented musicians), it’s also good to have the concert in your ears. There are 12 tracks in all taken from the RAH show, supplemented by another six taken from an intimate BBC Theatre concert and featuring Lauren Pritchard on a tremendous version of How Sweet It Is and Richard Hawley on No Tears To Cry.

It’s easy to knock Weller, but if he’s not your cup of tea then move on rather than put the man down for not playing your tune. At the end of the day the fact is that he wouldn’t be doing what he does today if he wasn’t doing it right, and for many, both hardened Weller addicts and those who simply appreciate good music, that thing is producing some great music. I missed his last tour and this release makes me wish I hadn’t.