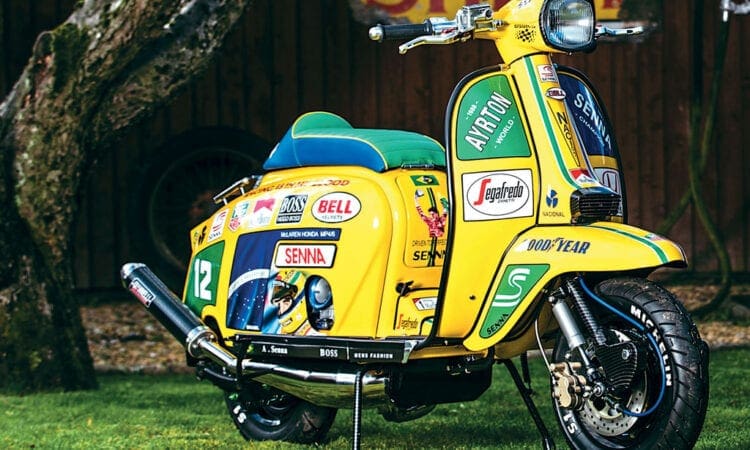 This year sees the 25th anniversary of Ayrton Senna’s death. With the support of a highly skilled and specialised team, Darryl Braga has produced an emotive and thought-provoking tribute scooter to the racing legend.

The motto of the Instituto Ayrton Senna, set up by his sister Viviane in 1995, is ‘Dedication, Determination and Perfection’, and it has educated over 12 million underprivileged children.

Bitten by the bug

Darryl Braga’s interest in motor sport started when he was a teenager riding moto-cross bikes. He then got into super-bikes and has always been a keen follower of Moto GP and Formula 1.

“I love performance bikes and cars, and it wasn’t until about six years ago that I got properly into scooters. Ever since a kid I was into the Northern Soul scene, and I’ve always had an interest in scooters through the scene, so I guess after a while, as everyone knows who’s involved with the scooter scene; one way or another the bug eventually bites you and you’re hooked.”

Getting into pole position

Due to Darryl’s interest in motor-sport he became a keen follower of Ayrton Senna since he arrived in Europe and made his debut in the 1984 Brazilian Grand Prix.

“I’ve followed him right from the early years, and when my friends were all following Nigel Mansell I stayed with Senna. It was his driving style, passion and charitable nature, which was something that the other F1 drivers couldn’t match, that attracted me to him,” Darry explained.

“I once did get the opportunity to watch Senna race at Donnington Park, but due to some unforeseen circumstances I wasn’t able to make it and that’s probably one of the biggest regrets of my life.”

Tragedy on the track

On May 1, 1995, during the San Marino Grand Prix, Ayrton Senna was killed in a horrific crash. Darryl remembers the moment that he heard the news.

“I was at the Classic Car Show at the N.E.C. in Birmingham and I couldn’t believe it. It was terrible. To me, Senna was a hero. He wasn’t afraid to stand up against the politics in F1 and in his private life he was a man with compassion, heart and soul. On the track, however, he was ruthless. He always drove with aggression and a determination to win.”

As we all know, there are a lot of tribute scooters on the scene, which are devoted to personal events and are usually developed from the experiences closest to our hearts. The time taken to develop a tribute scooter, and having the courage to share one’s personal feelings and experiences with others, is no doubt an emotional and daunting process, and therefore a decision which is not taken lightly.

Over the years and with the memory of the loss of Senna in his mind, Darryl decided that he would pay his own personal tribute to the F1 driver and he would develop a tribute scooter in his name.

In order to develop the full potential of the theme, Darryl decided that he would deliver an interpretation of Senna’s life and career through his own creative style. To support this, Darryl decided to commission a team of specialists who would be able to achieve the high standards he was looking for.

“I wanted the paint and bodywork to have the Brazilian national flag colours running throughout it. Some might think that to produce an F1-based street-racer the F1 element should be the priority, but that wasn’t how I was going to go about it.

“Because of the high levels of poverty, depravation and violence in the country, which was highlighted by the media, some Brazilian sports personalities chose not to publicly broadcast their nationality. Senna saw this from a different point of view and showed his country for all the good and positive things it had to offer.

“When Senna wasn’t racing he put all his energy into charitable causes, and in particular helping underprivileged children in Brazil. For me, this had to be the main thrust of the theme. Of course, I wanted the artwork to show Senna for the true racer he was and show images of his successes. The graphics of his sponsors over the years would bring in the F1 element and the engine set up would reflect the performance side of things.”

Darryl commissioned Mick Thompson to carry out the paintwork and carbon wraps, and a ‘secret associate’ who Darryl’s worked with before was briefed and delivered the artwork. The responsibility of the engineering and build processes was handed over to Rob Miller at Simply Retro, whilst unique fabrications were completed by Keith Newman at K2 Custom-Classics. Production of a one-off custom seat was handled by ‘Corky’.

The scooter is true and honest, and it’s stunning. It’s a street-racer with a difference. It’s got style and personality, and it delivers everything about Ayrton Senna in an intelligent and joined-up way.
The quotes from Senna across the top of the side panels say it all; the delivery of the artwork draws you in closer to appreciate the true racer Senna was; and the sponsorship logos keep the F1 influence pumping.

Remove the side panels and the experience develops even deeper. Rob Miller’s work and influence is truly outstanding.

“Rob helped me through a lot of the areas of the development of the scooter,” said Darryl. “Not just the build and the engineering, but how to achieve the right balance in appearance and practicality. Sometimes I’d suggest something to Rob and he would always come back with options which would always work out for the best. He’d take my ideas to the places where I wanted them to go and if I’m honest, probably even further.”

The matt black powder-coated engine and gearbox supports the race feel; the green alloy gear selector and cable fittings are perfect; and the dark carbon wrapped flywheel cover adds grit. The carbon wrapped toolbox, petrol tank and cylinder head cowling are in the colours of the Brazilian national flag, which look amazing and also add to the feel.

The detail of Keith Newman’s work around the scooter adds special touches and delivers a custom feel. The one-off custom seat developed by Corky looks fantastic, and the neat seat release catch Corky’s designed into the seat is slick.

He’s also stitched the ‘Nacional’ sponsor logo on to the back of the seat, which replicates the sponsorship logos stitched on to the driver’s and pit crew’s flame-retardant clothing. Finally, and to add to the pit lane feel, Darryl’s had a one-off custom made ‘quick-release’ Dzu-style fairing fastener to replace the standard tool box locking catch.

Like Senna himself, the style of this scooter is based around a desire for perfection. It’s been brought together with passion, knowledge and experience throughout, and every element has been put together with precision, thought and meaning.

Darryl will no doubt continue to show the scooter through the rest of this season and if you can get through the crowd, which will probably have gathered round it, make sure you take the time to appreciate the true heartfelt emotion that’s been put into this scooter, which celebrates the life of a true Formula 1 legend.