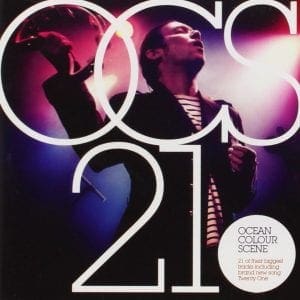 The press release begins with, “The Ocean Colour Scene story should already be the stuff of legend; a rip-roaring rock ‘n’ roll odyssey set to a backdrop of 21 years of UK pop culture at its very best.” I think another thing worth adding, beyond the fact that OCS have that rare accolade of making good music throughout their history so far, is that they’ve managed to release what is in effect a ‘greatest hits album’ that is a whopping four CDs big and contains a number of pleasant surprises. Nice touch Brummy music-meisters!

Before I continue I should add there is a basic single CD version of 21 which is pretty much a ‘Best of…’ but I’d suggest to one and all you go for the box set as it really is more than just a collection of songs; it spans the band’s history from their debut single Sway to an unreleased version of Saturday from their latest album of the same name, and a brand new track titled 21.

In all, out of the 86 tracks here I counted over 20 marked as ‘previously unreleased’ that include versions of songs such as Yesterday Today and The Word, unreleased songs like Dreams and Hanging Around (both demos), and versions such as 40 Past Midnight featuring Rico and Paul Weller from the Later With Jools Holland TV show and It’s a Beautiful Thing recorded live with PP Arnold in 1998 at Manchester Apollo. And that’s before you count the live, demo, single and radio edit versions of other tracks.

From The Riverboat Song to The Day We Caught The Train, Travellers Tune to a previously unreleased cover of the Small Faces’ All or Nothing, Ocean Colour Scene have come a long way from the pubs having the biggest arena tour of any UK band to date, and headlining London’s prestigious Royal Albert Hall on their 21st birthday. They’ve had Top 5 albums, numerous successive Top 20 singles, and now they’ve produced a milestone album that not just lists the hits but gives the fans plenty more besides. There’s not many acts out there that can offer this much, let alone deliver.