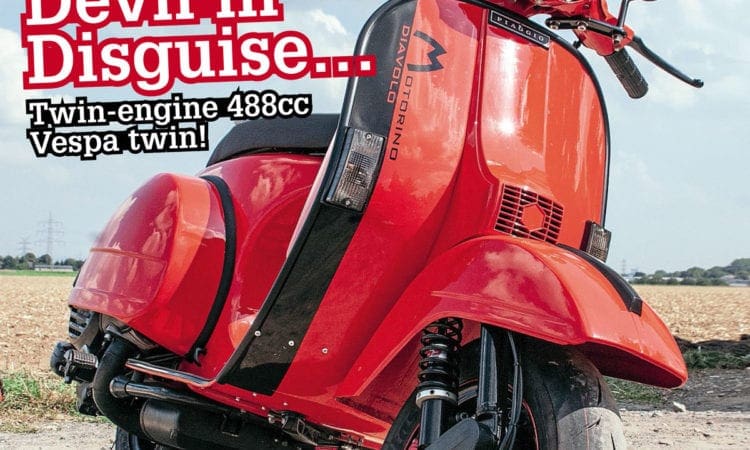 Devil in disguise, check out the twin-engine 488cc Vespa twin! There’s carnage at Cadwell plus a FREE Trojan CD is included in this month’s must-read Scootering magazine.

Simply put, Scootering is the number one scooter magazine in the world featuring stunning restorations and customisations, news, reviews, technical advice and an unrivalled insight into the scooter scene.

When images appeared of Motorino Diavolo’s Vespa twin they were dismissed as photoshopped nonsense but, as Stan discovered, it’s real and this boxer packs a punch!

A scooter capable of being both eye-catching on the high street, or competitively climbing up a Welsh hill in the dead of night!

A quest to embrace the epitome of challenges of scooter endurance, at the Bonneville Salt Flats.

PLUS! Scooter Trader; Dealer Profiles; Kickstart and you show us your scoots!

Scootering magazine is on sale in UK newsagents and supermarkets, and you can buy the current issue in digital and paper formats here!

You can also buy stacks of back issues, but it’s cheaper to subscribe. Subscribers save money, get their copies delivered to their doorstep and never miss an issue.