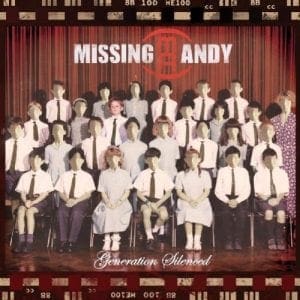 I don’t know about you, but every now and again a new band come along and they really excite me. Granted it’s happening less often as I get older (and possibly more cynical), but when they do the result is a huge smile on my face. Missing Andy are one such band and this is one of those albums I have eagerly awaited and that has rarely been out of my ears since its arrival in December.

A good album isn’t just about the music, it’s the song writing too and good songwriters are scarcer than you may imagine. Think about it; all that rubbish that emerges from TV’s reality shows and tops the charts at Christmas may have a tune that captures people’s (lack of) imagination for a short while, but there is rarely a good songwriter among them who has any substance to their work. Missing Andy on the other hand, if this album is anything to go by, do have some good songwriters in their ranks. Yes it could be argued they’re fortunate to have enough going on around them to write about, but so does everyone else. I think this is the reason too that when listening to the album and looking for influences I keep thinking of The Jam, Specials, Madness, The Clash and even Oasis.

Missing Andy seem to have cherry picked the best of them all and created an album that at first play does sound quite disparate but then grows on you in both a warming and aggressive way. While other CDs have come and gone in previous weeks, their reviews written before making way for the next, Generation Silenced has been the disc I repeatedly reach for inbetween. It’s been an escape on a shit day. A breath of fresh air when others have got too much. Something to look forward to, and each time I listen to it, it sounds better.

From the off the running order sounds good, like a live set offering the crowd a chance to rise, rest then crescendo before the encore. Alive gets you up off your arse and makes you feel, well, alive; no time for intros, it kicks the album off with both feet, guitars, keys and vocal arriving together at a dance floor filling pace. It’s got a street feel, sung from today and like every tune here it has a hook; something to get you all singing along.

The Madness-like Dave shows the ska inspiration, while new single the banker-knocking Money reveals some soul with brass carrying the melodic chorus. Kings For The Weekend is everyone’s escapism, again uplifting, the organ sound suggesting mod revival maybe. Like the rest, you need to check out the piss-take lyrics to Indie Kid, and apply where you see fit, and once you’ve passed the ballad-like Sunshine, you can all shout along to Scum at the end.

Pencilled in for release in February, Generation Silenced was put back until March 19, although as you can read in the Missing Andy interview, a digital version is already available for download. And in my opinion, it’s a f**king brilliant album. I just hope that the youth of today, the silenced generation of the 21st century, have the energy and enthusiasm to carry Missing Andy onwards and upwards and get them to where they deserve to be. For both their sakes, and that of the music industry as a whole.