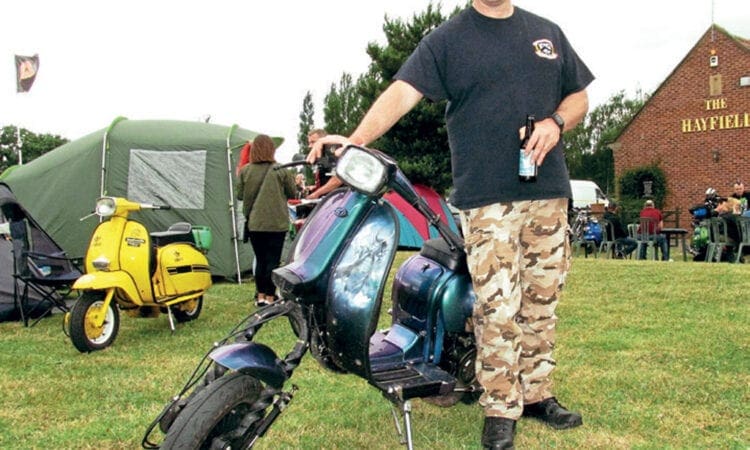 Some scooters have intriguing subjects as the basis for their artwork… others have unusual performance or engineering setups. Jan Slosmanis’ scooter, as the name suggests, blends all of these features…

Norse mythology… to some the theme might on first impressions appear somewhat confusing and uninteresting, and that’s where they’d be wrong. The theme is in fact, full of twists, turns and intrigue.

Jan purchased the scooter which would eventually be transformed into ‘Mischief and Mayhem’ as a full framed GP150 in July 2012 and since then it’s had some serious alterations and upgrades to say the least.

The leg shields have been trimmed by approximately 1.5in on either side but the original floor width has been retained. Behind the leg shields there is a neatly narrowed toolbox, which houses an exhaust temperature gauge and rev counter.

The scooter has a removable loop and 6in extended twisted forks. “I happened across the forks at the Cleethorpes Rally parts fair just as I started the project, so they were a very handy find,” Jan explained.

“The drop handlebars came with the scooter; the extended forks offset the drop of the handlebars, which gives the same riding position as standard but, in my opinion, with cooler looks.”

The front mudguard is a styled Suzuki RGV race-bike item and adds to the sharp looks of the scooter. The back end of the frame has been chopped and the side panels have been cut down to match.

“I’ve always been interested in Norse mythology and I didn’t want any modern Marvel Comics Thor/Loki confusion, so I went for a traditional(ish) image of Loki, plus the two side panels show different stories from Norse history. Loki is the God of Mischief and Malicious behaviour…” Jan explained.

The theme is complex but Jan knew that if he explained it properly and in detail the correct delivery could be achieved. To deliver the theme accurately Jan had to make sure that he chose the right specialists, who would be capable of creating the paintwork he wanted.

To support the theme the basecoat needed to convey two elements: it needed to give the cool feel of the region and it also needed to somehow take you back in time. If the basecoat could achieve this it would then allow the murals to take up the main responsibility of delivering the theme to the onlooker.

To complete the paintwork Jan commissioned Dave from Lambretta Upgrades to apply the basecoat, which is a pearl flip of Jade Green, Neon Blue and Ultraviolet, and Alan Smallwood to complete the murals.

Delivery of the theme

The leg shields introduce the onlooker to the theme, showing Loki in a traditional appearance with his two horns and blue colouring, which is based on his Frost Giant, or Jotun heritage.

The ‘Mischief’ panel explains the story of how Loki engineered the death of the god Baldur. Baldur was the perfect god, loved by all, however he started to have premonitions of his death. His mother, Frigg, then visited nearly every creature and object on earth, asking them not to harm her son, to which they all agreed.

Loki discovered that Frigg had failed to ask mistletoe, as she deemed it too harmless to count. At the feasts in Asgard, the gods would throw all sorts of objects at Baldur, safe in the knowledge that nothing could harm him.

Loki fashioned a spear out of mistletoe, and helped the blind god Hodr to throw it at Baldur, leading to his death. For his actions, Loki was imprisoned where he was tied down by his own entrails with serpent’s venom dropping on his face for eternity, or until the end of the world, also known as Ragnarok.

The ‘Mayhem’ panel depicts the battle at the end of the world where the gods of Asgard fought against Loki, the giant wolf Fenrir and an army of Frost Giants, leading to the world being consumed in fire before being reborn.

With the story of the artwork explained we discussed the engine set-up. The scooter’s gearbox is an Indian GP unit, which runs on 19/46 sprockets. Power is delivered by a Darrell Taylor ported TS1 kit with an Avanti large head.

Fuel is fed into the engine by a Dellorto VHSH 30mm carb and is helped along its way by the use of the performance enhancing V-force reeds. Power delivery is managed by an AF cassette clutch, and fumes are extracted by a TSR Evo exhaust, which has also had the Darrell Taylor treatment.

Together, the combination works perfectly and produces an impressive 35bhp and 25lb-ft of torque. To keep handling under control the front end is supervised by a set of Triumph Daytona front dampers and the rear end is managed by a Protech rear shock.

Jan explained that initially he had experienced some problems with stators failing on a regular basis, but this problem has been overcome. Now, to make sure everything stays in check there is a custom wiring loom, which supports the battery for the exhaust temperature gauge, SIP speedo and horn, and an Anthony Tambs Scootronics stator and AF lightened flywheel keeps delivery of the electrics stable.

I asked Jan to describe the ride and performance. “The engine responds great,” Jan explained. “If I’m accelerating from ‘stopped’ to ‘fun speed’, it flies. It goes into the real power at about 65mph and then flies up to 80+.

“It’s always fun glancing across at car drivers when they see a lady’s shopping trolley fly past them at 85, watching them do a double take!” Jan laughed.

“Handling is good, and most importantly reliable, so taking the time to invest in a decent suspension and brake set-up was nonnegotiable.”

But as we all know, with decent power there’s always a trade-off with fuel consumption; Mischief and Mayhem is fast, but thirsty, 23-25mpg, and with this in mind Jan chose to fit a Lloyd Watts long-range fuel tank.

Jan’s a big bloke and a rally-going scooterist, so the seat’s been fitted with a gel pad and re-covered by Corky. A neat one-off rear rack made by Webbo at NFIfabs sits behind the seat and finishes things off nicely.

I asked Jan if there was any chrome to add to the scooter. With a smile on his face he said, “No! The stainless flywheel cowl with sun-wheel is the only shiny bit on it and that’s the way it’s staying!”