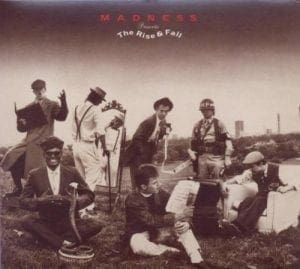 The latest in the line of Madness album re-releases is Rise & Fall, originally released back in 1982 and now digitally re-mastered and available on CD with a whole host of bonus tracks. When it first came out I was a Madness fan and bought it pretty much as a matter of course. Our House was of course the big hit from this album, a definite nod back to the earlier days of the Nutty Boys and an upbeat track on what is arguably a more serious sounding long player than any of their previous releases. By 1982 they were growing up and as a result they produced albums about growing up, crime, politics, suicide and insanity – apparently!

Tomorrow’s (Just Another Day) was the other single on the album, the band managing an upbeat somber song, always looking forward. Blue Skinned Beast  was an anti –Thatcher/Tory song, and listening to the lyrics again with that in mind (and considering the time, 1982), I can see that. Primrose Hill introduces brass bands and strings section and now I remember enjoying this album first time round as a musical release rather than more of ‘that Nutty Sound’.

Calling Cards is a bit livelier and jovial, but then the original album closes with the jazz-like Madness (Is All In The Mind).

The original 13 tracks have been packaged with videos for four of their singles – Our House and Tomorrow’s (Just Another Day) – from this album and House Of Fun and Driving In My Car, which preceded it) as well as a 17 track bonus disc containing the good and the not so good of a Kid Jensen radio session and various single-sides. The radio session tracks are from the album and so for collectors, the rest do include Driving in My Car, House of Fun, a USA B-side, a promo single and a version of Tomorrow’s (Just Another Day) with Elvis Costello on vocals among the vinyl archive. Add to this a booklet with sleeve notes and lyrics and here’s another must for both the Madness fan and also those of British music.

It may not be One Step Beyond and Night Boat To Cairo, but would the likes of Blur have existed without Madness’ entire career?

Listen to: Our House