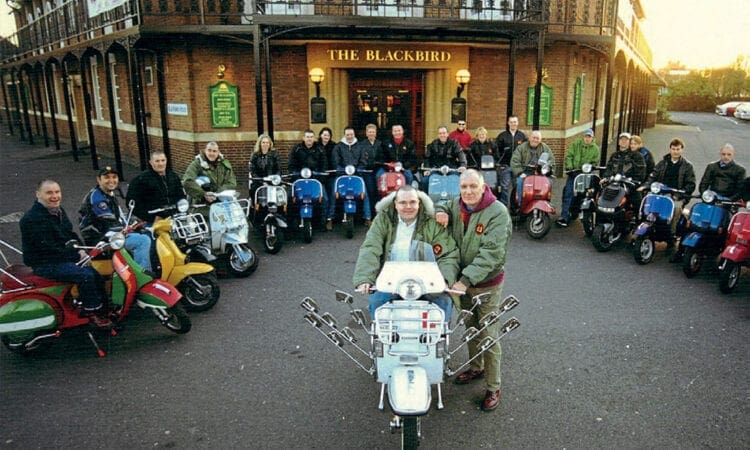 Leicester Phoenix Scooter Club celebrates its official 40th anniversary this year, but the origins of the club date back as far as 1976.

Founding member Kev Holden had held a fascination for scooters since seeing a group of Mods in Skegness back in 1963 when he was only six years old. Kev’s scootering interest was rekindled in the 70s when his friend, Paul Gaskin, got himself a Mod-style scooter. With Kev’s passion reignited, he bought himself an LD 125 Lambretta and then a Jet 200.

One night Kev rode to the Blaby Fair, where by chance he met Gibbo and they rode down to the Baker’s Arms and met more scooterists, including John Deacon, and made a group of six. As things developed, the small group of scooterists got to know the guys at GT Scooters Leicester, which was where the Leicester Lambretta Racing Team took their scooters.

Gibbo found out that the racing team, including Norrie Kerr, Dave Webster and Chalky White, all met at the Freeman’s Arms so the group of six decided to ride down to the pub hoping to meet other Mods. But all they found was the race team!

Nevertheless, the numbers started to grow and the Freeman’s Arms became a regular meeting place; and with Chalky’s connections to the Market Harborough scooter scene in 1976, the Kettering & Leicester Phoenix SC was born. But unfortunately this newly formed alliance didn’t last long, with the Harborough & Kettering lot breaking away.

As a result, the name of the group changed to the Leicester Phoenix and the numbers dropped. However, after a short period of turbulence the numbers started to grow again, while the racing team were becoming separated from the younger scooter lads who were more into the Mod revival scene.

In 1978 independent rider Les Thorn passed the Freeman’s Arms and saw the line-up of scooters parked outside. Anxiously Les went in; and lifelong friendships were forged, with Les sitting down next to Dave Webster and asking: “Do you know anything about Lambrettas?!”

Having been an independent rider, and still a little bit unfamiliar with the whole scooter scene, Les admits that when he was asked if he wanted to go on a ‘run’, he didn’t really know what a run was but said ‘yes’ anyway. Les explained that the run turned out to be the Scarborough rally, which was a little lively to say the least – with the police not being the friendliest welcoming committee!

By ‘79 more runs followed and, as the scene grew due to the Mod revival, more people joined the group and the number of riders taking part in the scooter runs began to build. However, this meant that there were more scooter breakdowns to deal with and so, having seen that other clubs were using back-up vans, it seemed like a good idea that they should get one organised.

For the next rally Les booked a van for the weekend and then tried to collect the money from everyone attending the rally. However, this proved no easy task but it led to the thought of ‘why not develop the group into a proper club, paying subs etc.?’ Everybody agreed, and so as Kev Holden was the first one to speak to Les when he first went to the Freeman’s Arms the previous year, Les made him the club’s first No 1 of what is now officially the Leicester Phoenix Scooter Club (LPSC).

But as a result of the influx of new Mod revival members to the club some of the original members felt that the focus of the club was beginning to move away from scooters and more towards the new Mod scene, which led to original members, Kev Holden, Gibbo, Simo and John Deacon breaking away and forming the Inner City SC. (Named by Kev after The Jam song, In The City.)

With Kev Holden leaving, this meant Les became No 1. Les drank at the Working Men’s Club on Saffron Lane, where a young glass collector by the name of Darren Simmonds, later known as ‘Bananaman’ showed an interest in scooters and thus joined the LPSC. At the time Mark ‘Dunny’ Dunn was also involved with the club and he designed one of the early club patches.

As the Mod revival diminished, which had swelled the numbers, the club now saw a big downturn in members and it literally went down to three – Les, Daz ‘Bananaman’ Simmonds and Dave Harriman. But by the mid-80s it began to see its numbers grow again and with the arrival of new members, including Glenn and Julie Turner, Alan Smith and Dave Greenwood (‘Dodgy Dave’), the club started to rise from the ashes.

After several years of sustained growth, Les felt that the club should now be more democratic and a voting committee with each member having their own responsibility in the club was introduced.

In 2002 Aaron ‘Mitch’ Mitchell and Steve ‘Scouse’ McKinnon joined the ranks, which was at the time when the club had also now started to put on its own dos; the first being at Granby Halls with Nick Murphy’s band ‘Ska-Boom’ playing for free.

After another successful event, which was an all-dayer at The Blackbird pub, this led to the club deciding to hold its own rally and Phoenix Nights was born.

In May 2006 the first official Phoenix Nights do was held at Oadby Town Football Club, and as the event grew in size and popularity it moved to its current home of Hinckley Rugby Club.

The wheels of the club were now turning nicely and when Les reached the ripe old age of 70 he decided that it was time for a younger man to take over the reins of chairman. In 2012 Glenn Turner took up the office for a couple of years and the current chairman, Aaron ‘Mitch’ Mitchell is now at the helm.

The club currently meets every Wednesday in the Fairfield pub, Wigston and, with a dedicated band of members, the Phoenix Nights event also continues to go from strength to strength. This year Phoenix Nights 14 takes place over the weekend of May 10-12 and it’ll be an absolute cracker, so make sure you don’t miss out on the action and join in the fun to help members of LPSC celebrate their 40th anniversary!