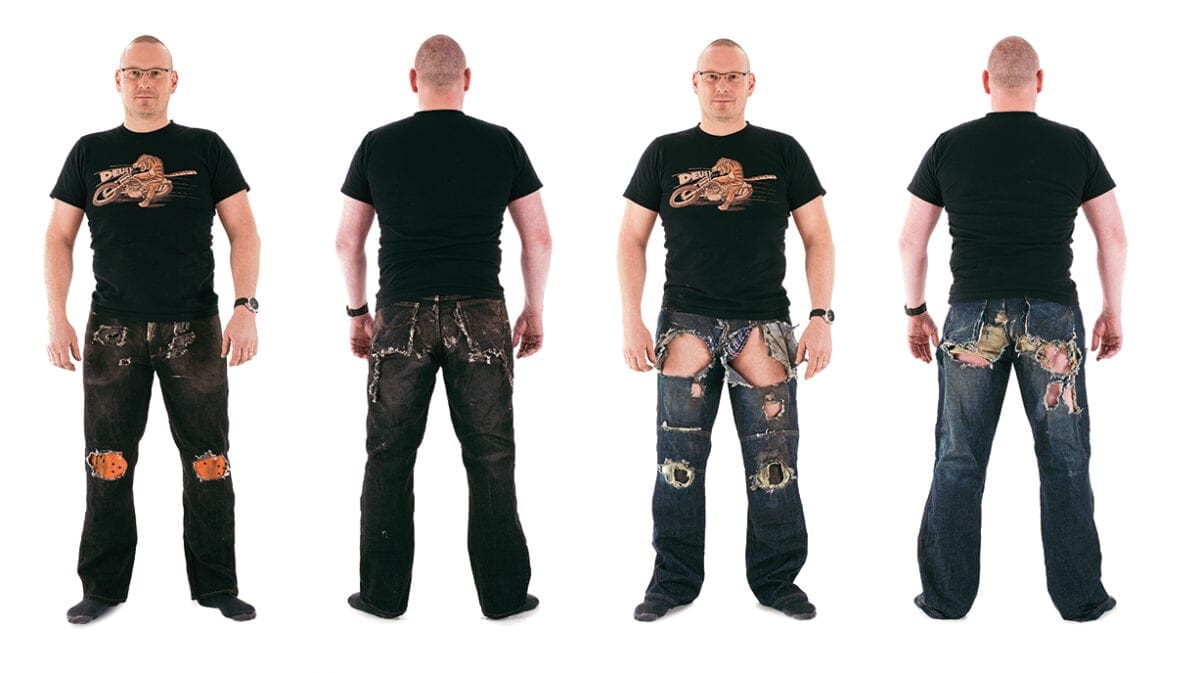 I used to ride in plain jeans when popping out to the shops – I figured that they’d be okay if I wasn’t going too fast, and besides, I had mates who’d crashed in them without any major injuries.
That was until I fell off my old Honda. On a roundabout. At running pace. Just down the road from my house. I walked away fine… but my knee was a mess.
It was proper biking kit all the way from then on.
There’s a fantastic choice of gear now, and it doesn’t have to cost a fortune. Granted, if you want the best, you need to pay more, but there are also good options out there if you’re on a budget.
So how cheap can you go? One of our contributors recently reviewed a pair of premium-quality motorcycle jeans. Fully-lined with para-aramid, he compared them to a very cheap part-lined pair that he also owned. Sold by Aldi under the ‘Crane’ brand, they cost just £30, and are quite well constructed with what appears to be reasonable quality protective material covering the bum, hips and knees.
Interestingly, when I posted the review online, we received a lot of feedback from people stating that their Aldi jeans were fantastic, based not on their experience of a crash, but for being “cheap” and “comfortable”.

It’s important to understand that, while many bikers will talk about their ‘Kevlar jeans’, this is often (incorrectly) used to describe what is in fact a para-aramid or other specialist fabric.
Para-aramids have for many years been woven or knitted into a lightweight fabric to resist heat, abrasion, knives and bullets. They’re used in everything from automotive drive belts to military ballistic helmets. But Kevlar is actually the trade-name of a product made by Du-Pont; some brands use it, while other manufacturers use a quality alternative para-aramid, or even their own high-tech materials.
Covec and Pekev are two other technologies, with each used in motorcycle jeans. You’ll find the liquid-crystal polymers of Covec for instance (also used in Vectran) in ropes, sails and even Mars landers. Every type of fibre has its own properties and advantages.
Think of it like doing ‘the Hoovering’ – people are often actually referring to Dyson, or Electrolux… or Henry.
Kevlar, Covec, K-Tech, Pekev, para-aramids… as more companies invest money in developing the kit to protect us bikers, our choices grow, which has to be a good thing!

You’ll generally find jeans in two styles; part-lined and fully-lined. Good-quality part-lined jeans can offer decent protection, but where and how that protection is placed varies. Some brands will only cover the bottom and knees, whereas others also give coverage to the hips, or sometimes the entire front of the thighs.
Only fully-lined jeans will have the potential to gain CE approval, but even those without the thicker lining and ankle restraints required for approval can offer you good levels of protection, however you fall.
If in doubt, turn the trousers inside out and look at what’s protected: you’re unlikely to slide on the insides of your knees, but what would happen if you came off your bike and landed on your front? Are your thighs protected? Also check how the protection is fitted; If it’s a small patch sewn onto the denim, it could come free and be of no use in a crash. Quality linings can also help prevent the jeans from tearing open at the crotch.

How much protection do I really need?

Many brands offer jeans in their range with CE Level 1, and some even exceed the higher Level 2 approval… this testing standard looks not only at the garment’s impact and abrasion resistance, but also at its construction and fit. It’s your guarantee that the clothing is most likely to survive a serious tumble. But don’t be confused by clothing that is CE approved, and others that have CE approved protection fitted, as this refers just to the armour installed.
Ultimately, your choice is all about compromise; to achieve the highest performance, motorcycle jeans need multiple layers that can add bulk. Think about where and how you’re riding – better that you wear a pair with good protection for every trip, than don’t wear a pair when you don’t fancy it. My own jeans aren’t CE approved, but I have every faith in them offering me the safety I need for day-to-day riding.
Whatever you choose, there are plenty of options available, which brings us back to the opportunity to kit yourself out in something that potentially costs less than a round of beers.
The test
This isn’t science. A CE standard test requires the work of leading research and testing organisations such as SATRA, but it doesn’t take a lab-coated boffin to tell you that, if you do crash a bike, you might not just slide on your bottom.
I wanted to keep this test simple, so by dragging a pair of quality, fully-lined motorcycle jeans, and a pair of budget-priced part-lined jeans, I hoped to get an idea of what could happen if things go pear-shaped.
We conducted the test at Stretton Go Kart circuit in Leicester. A new pair of Hood K7 jeans and a new pair of Aldi jeans were slipped onto two old pairs of motorcycle jeans, each filled with off-cuts of para-aramid. This created around 20kg of weight in each.
That’s a fair way from the weight of most of us riders, and as I also wouldn’t be able to get up to speed, then drop the jeans onto the track (like in a real crash), both pairs travelled much further behind the kart than you would expect in a real incident that might involve a slide of a few seconds over tens of metres. This is a comparison – putting the two head-to-head still gives a very useful idea of the differences between the two products.
Getting up to just over 55mph, and letting the jeans flail around behind the kart, I completed four laps of the 850m circuit. It might sound ludicrous to expect any piece of protective equipment to last a slide of two miles, but if you watch the video at bit.ly/jeanstest you’ll see that these lighter-than-a-human dummies spent a lot of time in the air.
Remember too that the energy involved in an impact at speed is much greater than the slide that comes afterwards, so the longer drag duration just spreads that energy over a greater time. Of course, there’s a bit more to it than that, but remember – this is a direct comparison.
The results
It’s important that any bike jeans are well constructed. I’ve worn part-lineds from one of the premium brands, but the cheap Aldi pair here had the para-aramid patches sewn directly to the denim. When this thread caught the track, the protection was allowed to move, which would not only reveal the skin beneath, but also allowed the aramid to bunch up and fail more quickly. Frankly, the damage to the Aldi jeans that would leave flesh exposed was frightening compared with the premium quality pair.
During the same drag, the fully-lined Hood jeans survived much better. In fact, as they’re built of much higher-quality denim, and even the insides of the pockets are made of denim, there were few holes created.
Where the denim had failed, the para-aramid was intact, and at the knees, the armour was above the para-aramid, so the test only holed the denim. The cheap pair had burnt through the denim and para-aramid at the knees.

These cheap jeans certainly offered some protection, and I’d be the first to say that, if you only have a very limited budget, then spend it on what you can. In fact, this Aldi pair had a superior construction to some unbranded ‘bargain’ jeans Ive seen.
But every crash is different, and while part-lined jeans have been proven to save riders through good quality design, the top ones tend to have the para-aramid running much further down than in this pair.
In this fairly extreme test, our premium-quality, fully-lined motorcycle jeans proved a valuable point that yes, you do get what you pay for. These are not CE approved, but they are well built, from high-quality materials. Are they worth the extra money?
I think so.