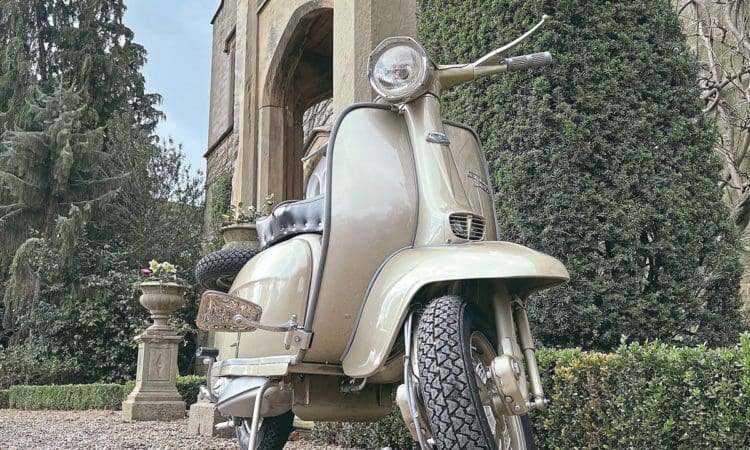 Many regular readers will probably recognise Julian Jones, if not by name, then probably by face, as he can in no way be described as camera shy. He featured in Classic Scooterist a couple of times last year with two beautiful classic scooters that have passed through his ownership.

Not wanting to go over old ground, the full story on the owner, for anyone who is interested, can be read in his first article. Within the original article and the details on the owner, it does state that Julian says that he has no emotional attachment to any of the machines that he owns and that he’s slowly, but surely, working his way through the back catalogue of classic Vespa and Lambretta scooters.

This is something that I personally don’t understand; if you search for something you really, really want and invest a lot of time, trouble and money to eventually get it, to just then move it on is a totally bizarre concept to me. But to be fair, it isn’t just Julian and I’ve known several different folk who do this. For some it must be the thrill of the chase; for others it’s the pleasure of sourcing rare original parts and accessories; and for others it’s the love of the build. So, who am I to judge, as one man’s meat is another man’s vegan burger, or something like that??

At the end of the day, it isn’t my business what the owners do with their machines – and to be honest in this instance, it does prove very convenient for me as there’s always some quality machinery passing through JJ’s hands that make for interesting content and I can get on with the job in hand (featuring the scooter and the story behind it) and not sound like a repeat of This Is Your Life with Eamonn Andrews reading from his big red book.

And so it’s with great pleasure, that on this particular occasion, I can present to you JJ’s 1967 Spanish Lambretta Jet 200.

The Evolution of the Spanish Lambretta Jet 200 (short version)

In the late 1940s and 1950s postwar Spain was in a similar situation to Italy; there wasn’t a lot of money about, for the working class anyway. There was a need to produce affordable transport for the masses to help recover from the years of war, be it domestic or multinational. This would hopefully kill two birds with one stone by at least going some way to sorting the issue of mass mobility and in turn, helping the economy recover.

A deal was made between the Innocenti company in Milan and a small local pre-existing company to produce the Lambretta scooter in Spain. And in 1954, the first two scooters were presented by the newly established Lambretta Locomociones SA. These were the Spanish Model 125 A (their version of the Italian LD model) and the 125 B (the Spanish company’s version of the Innocenti Model D).

This new company was based in the small town of Eibar, about 50km (30 miles) inland and east of the port city of Bilbao on the northern coast of the country. The Lambretta models that came out of the Eibar factory were always behind the current Italian range and had some individual touches, such as the turning front mudguard on the Series 2 version that has since become known by a general description as the Winter Model.

In 1965 the Slimstyle Lambretta (or Scooterlinea as it was known in Spain) was launched with much pomp and ceremony to the press and public. These early Scooterlinea machines were Series 3-looking scooters, but which still relied on the late Series 2 engine to power them.

The first ‘prototypes’ of the Spanish Lambretta Jet models (the Spanish SX range of machines) had used Innocenti 200cc engine casings. Apparently, they were sold in some dealerships, but were never officially advertised. Some had the new Jet style bodywork while others retained the Scooterlinea TV 175 body style and were badged up as TV200.

The first Jet 200 to be ‘officially’ presented was in March 1967 (surprisingly without the fanfare of previous model launches). Despite this being the flagship of the range, by this time in Spain (as in Italy) the Lambretta was not the once desired fashionable mode of transport that it had previously been.

The gold-painted Jet 200 was also the last Spanish Lambretta model to be produced by Lambretta Locomociones before production came under the control of Serveta Industrial SA.

Julian Jones’s first scooter was a 1979 Jet which he purchased in 2011 and since then he’s fallen head over heels in love with the top-of-the-range Spanish Lambretta and since that time he’s owned all three marks of the model, plus a late Lynx.

In total Julian has owned 10 Jets up until now – that’s because (as previously mentioned) he never keeps owt for too long. Julian has always championed the Spanish 200cc model in comparison to the Italian versions and he states that in comparison to riding a Jet, he always felt as though he was on a superior product.

Prior to 2015 Julian had owned several Jet machines but had never been the keeper of a Mk1, his most desired Lambretta model. Even though he’d been on the lookout for such a scooter up until that time, nothing had come along that really floated his boat.

Eventually, one came up that a guy in Scotland was selling which ticked most of the boxes on Julian’s wish list. It was a late 1969 Mk1 produced machine, but which was registered on a 1971/72 K reg plate. As one of the late produced items it had the correct metallic bodywork and gold tinware under the bonnet.

As a Mod, Julian is, by the very nature of the beast, concerned with the detail. As his Mk1 didn’t have the correct matching year of manufacture and registration date, it bothered him; so as though he ever needed an excuse to sell a scooter, he moved it on.

This, he admits, was in fact a decision that he regretted almost as soon as the transfer of ownership was complete, saying that: “It was a big mistake to let that one go” – a statement quite out of character from his usual, cavalier easy come, easy go attitude to scooter ownership.

Still pining for a Mk1 Jet 200, Julian kept a lookout for the perfect machine. Then in 2020, one appeared on an enthusiasts’ Facebook page; it was an early 1967 model with the correct numbers. Excitedly, Julian sent a message to the owner.

The two had a good conversation about the scooter and the exceptional work that had gone into producing the finished machine. Everything was correct – there was even a photographic record of the original condition and the restoration as it progressed through the different stages.

Julian asked the owner that if he should ever decide to sell the machine would he please let him have first refusal on it. The owner agreed and nothing more was heard until 2021 when it appeared for sale. Julian contacted the original owner, but unfortunately it had already been snapped up and sold. The owner said he’d completely forgotten about Julian’s request and genuinely apologised for the oversight; but said he that was a man of his word and couldn’t now turn down the sale to the other guy.

Life gets busy and things get forgotten so Julian was cool with the mistake, even though he was somewhat disappointed in missing out on his dream scooter, well for that period in time anyway.

On Boxing Day 2021, Julian was relaxing after pigging out on some leftover cranberry and sage and onion stuffing-flavoured SlimFast (he’s on a super diet, trying to get the body of a racing snake). While he sat there completely pogged from his festive over-indulgence, he was scrolling on his phone and happened to see a ‘for sale’ post pop up – it was his dream scooter, the one he had been chasing for a while and which he had narrowly missed out on just a few months previously.

He excitedly messaged the guy who replied and they began a conversation, as the scooter was still available. Julian asked if it was the scooter from the guy who had originally built it (which it was) and also asked why this new owner was selling it? The reason was given that the new owner was moving home and didn’t have the room for it.

That was all the info Julian needed; so a deal was done and Julian is now the owner of his very favourite classic scooter, a 1967 early Jet 200 Spanish Lambretta, with a correctly dated registration for the year of manufacture.

While we were doing the pictures for this feature and generally talking about the beautiful machine in front of us, I think that Julian actually said he wants to keep this machine! Well at least that’s what I think he said, and to be honest who could blame him as it appears to be a first-class restoration, is a real looker and something a bit rarer than, and different from, its Italian cousin.

[Thanks to Dunston Hall for the use of their beautiful grounds; to Jaime de Prat Salomone for the information from his new book on the Spanish Lambretta; and Perry Lewis, of Totally Scooters, for always being there to answer my questions when I call].