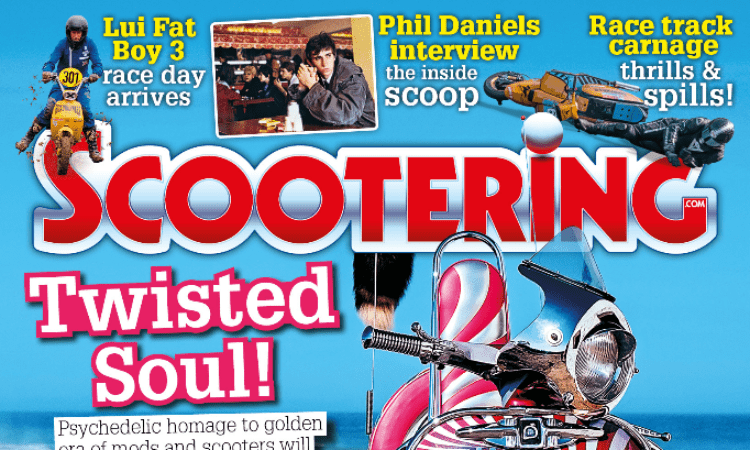 Latest issue out now! Click to find out what we’ve got for you this month…

Kickstart – The upfront section with all the latest news, views and product reviews!

Twisted Soul – An almost psychedelia-induced tribute to the late 70s Mod revival, and the ensuing rally era of the 80s. A reflection on time, captured in paint.

Rally Report: Skegness – Starting from humble beginnings as a ‘winter warmer’, and now in its ninth year, it’s ‘back to basics’ at Skeggy.

Show Report: Cologne Custom Show – Not just another custom show, the guys at SC in Cologne do things differently, and it’s pretty cool.

Rally Report: Tenby – All roads led to Tenby during the glorious sunshine of the May Bank Holiday, which made this wicked weekend event all the more glorious.

Rally Report: Kelso – The big one north o’ the border! Kelso… not to be missed, but most definitely to be repeated!

Show Us Your Scoots – The best of our readers’ rides this month as sent in by you.

Mailbox – Readers’ letters, laughs, feedback and fury – get it off your chest man!

Dystopia – We’ve seen some reasonably unusual things here at Scootering, but Dystopia, and its accompanying photoshoot set a new standard. Brace yourselves!

LCGB John O’Groats to Land’s End 30th – Thirty years ago the LCGB embarked on a trip from one end of the country to the other, uniting the members like never before…

The Midgley Scooter Collective – As a teenager in 1966, Paul Midgley used to gaze in awe at the newly released Lambretta SX200 – dreaming that one day he would own one…

The Meteors – Paul Reeson’s T5 cutdown-chopper has been picking up a steady stream of awards at custom shows. We find out the secrets of Paul’s success.

An interview with Phil Daniels – With talk of film sequels, and news of Phil’s new scooter, we decided to have a catch-up with the man himself.

Club Do’s & Events – Your essential guide to the scene – What, Where & When!

Scootering Words & Sounds – The best of scootering words and music as reviewed by Nik and Sarge.

A labour of love – Tribute Festival is not strictly a scooter event but it was well attended by our fraternity.

Rebel Threads – We interview a man who has dressed many film and countless music video stars, Roger Burton.

BSSO Report – Darley Moor – The next round of adrenaline pumping racing ensues at Darley Moor: Paul Green brings us the highlights of the event.

Tech Torque: Essential maintenance with Stu Owen – The Lambretta gearbox doesn’t have to be all that complicated. Stu Owen explains.

Scooter Trader – Your sales and classifieds section – including Specialist Services and At A Glance.

Dave’s Nostalgic Custom Corner – Nostalgia master Dave Oakley pulls out another stunning blast from the past – this month it’s Budweiser.