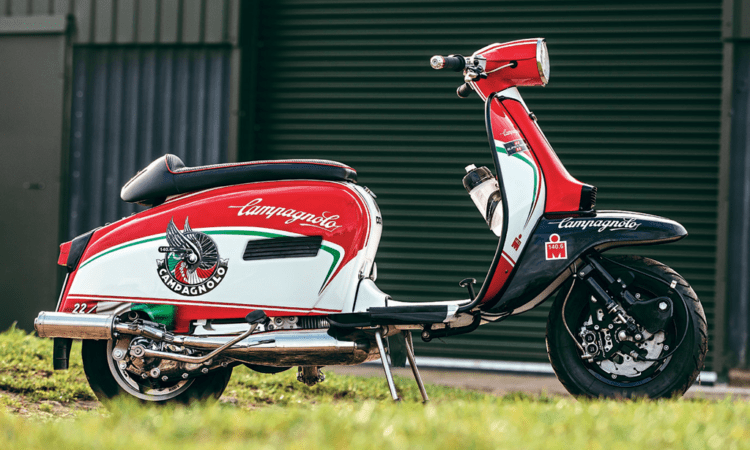 Take the most challenging sport in the world, add a superb artist and sprinkle a tribute to innovative engineering. The result? Mark Wakefield’s stunning Campagnolo GP.

Anyone who completes the course within the stipulated time of between 16 and 17 hours (depending on the course) can refer to themselves as an ‘Ironman’.

The owner of this gorgeous street racer, Mark Wakefield, has completed the challenge on a staggering four occasions.

Originally intended as a tribute to everyone who’s completed the event, this GP has evolved into a far more complicated tribute than its simple lines suggest.

Out of the blocks

A perfectionist in everything he does, Mark’s commissioned Paul at Oiltek in Barnsley to make some further modifications and it was there that we finally got to grips with this stunning machine.

“The scooter’s an absolute pleasure to work on,” began Paul. “The initial brief was to replace the tank with one in black. This suited the scheme’s simple lines, so much so that Mark decided to powdercoat the engine case, meaning a full strip-down.”

Originally built by Harry Barlow, the engine is based on a 245cc TS1 barrel that’s been subjected to Harry’s usual magic.

“Harry’s produced a motor that generates a phenomenal amount of torque,” said Paul. “We dyno’d it at 28bhp and that’s usable across the whole range.”

Transmission’s taken care of by the ever-popular GP200 gearbox with an LTH clutch proving more than capable to its task. Fuel’s delivered by a 35mm Mikuni TMX carb, whilst a Franspeed Super Tourer extracts maximum power from the departing fumes.

Having used some of the best names in the business to create the scooter’s beating heart, Mark dispatched the bodywork to one of the best in the business, David Dickinson. It’s a mark of his expertise that just when it seems there can’t be any more variations on a street racer scheme, he comes up with something new.

The lines on the side-panel are undeniably aggressive and the GP’s voluptuous leg-shields are accentuated by arrowheads. The 3D flag effect, so often overdone, is restrained and the choice of a solid black front mudguard is inspired. This really is a scooter that looks fast, even when standing still.

In its original incarnation the scheme was more focused on the Iron Man event, but this look has now been cleaned up. References to the epic triathlon can still be found, notably in the laser-cut combined water bottle and digital instrument cluster holder. Incidentally, the Campagnolo water bottles are destined to hold two-stroke oil, not liquid refreshment.

In choosing to refocus the scheme, Mark’s not only created a very clean street racer, but also managed to neatly combine his passions of athletics and scooters.

Best known for their innovative high-end components for racing cycles, Campagnolo were also the company Innocenti commissioned to produce the world’s first inboard disc brake fitted to a two-wheeler.

As befits the athletes that originally inspired it, this is a scooter that performs in all disciplines: paint, performance and perfect execution. Given the impeccable planning that’s gone into this build, it’s ironic that there’s only one component missing. A Campagnolo brake!