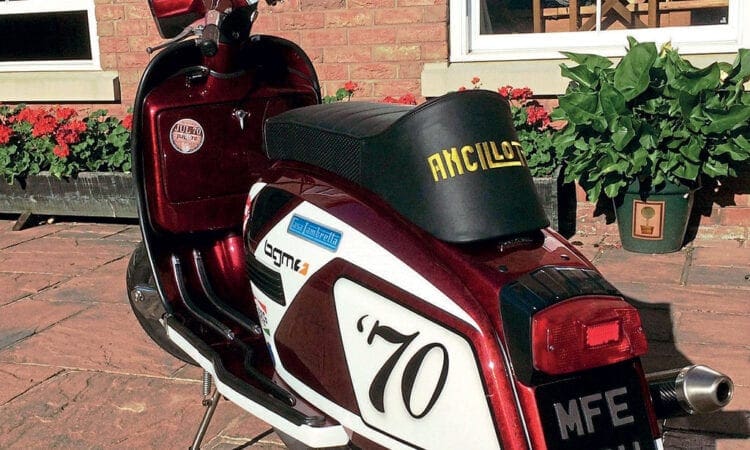 Street racers are the purest form of customising. Everything is done for a purpose, and the goal is to not only make a machine outperform its rivals but to have it look like it can, too!

Owner and builder Danny Roberts, from Boston, started out with a fairly basic 1970 GP200 in November 2016. When time allowed he set about the six-month transformation to the ‘Red Dragon’ you see here!

First the bodywork and engine were separated, and both were prepared for battle. The frame was strengthened where required, and metal removed to accommodate the fitment of an open carb and race expansion, done very neatly so as not to ruin the beautiful flowing lines of the GP.

Once he was happy with the bodywork base, it was sent to Paint Supremacy in Lincoln for paint. The use of related logos, racer numbers, block work and pin striping is classic to the street racer look, but when you add a beautiful deep red candy and silver/white detailing, the finish is just popping! There’s no point just looking fast, so while the frame was away Danny turned his attention to the motor.

With close liaison and advice from tuning genius Darrell Taylor, his aim was to produce an engine with a torquey linear tune – civilised enough to use around town, but then to pull like a train between mid-range and top end.

Once built it was correctly set up and finely tuned by Darrell on his dyno. This means that between 4,800 and 8,000 revs it is a bit of a beast, lovely! Of course to compensate for this extra power he needed to look at upgrading the handling and braking.

On the front he went for the very neat CASA hydraulic set-up, and along with BGM shocks front and rear, polished tubeless rims and good quality rubber. I’m told it gives a very reassuring ride. You have to make sure not to snatch the brake though!

Other neat touches are the retailored Ancillotti seat, SIP digital speedo and the inventive Taylor Tuning thumb choke. The scooter has already achieved peer acclaim, picking up the trophy for Best Street Racer at a local scooter rally. Well deserved, I would say!