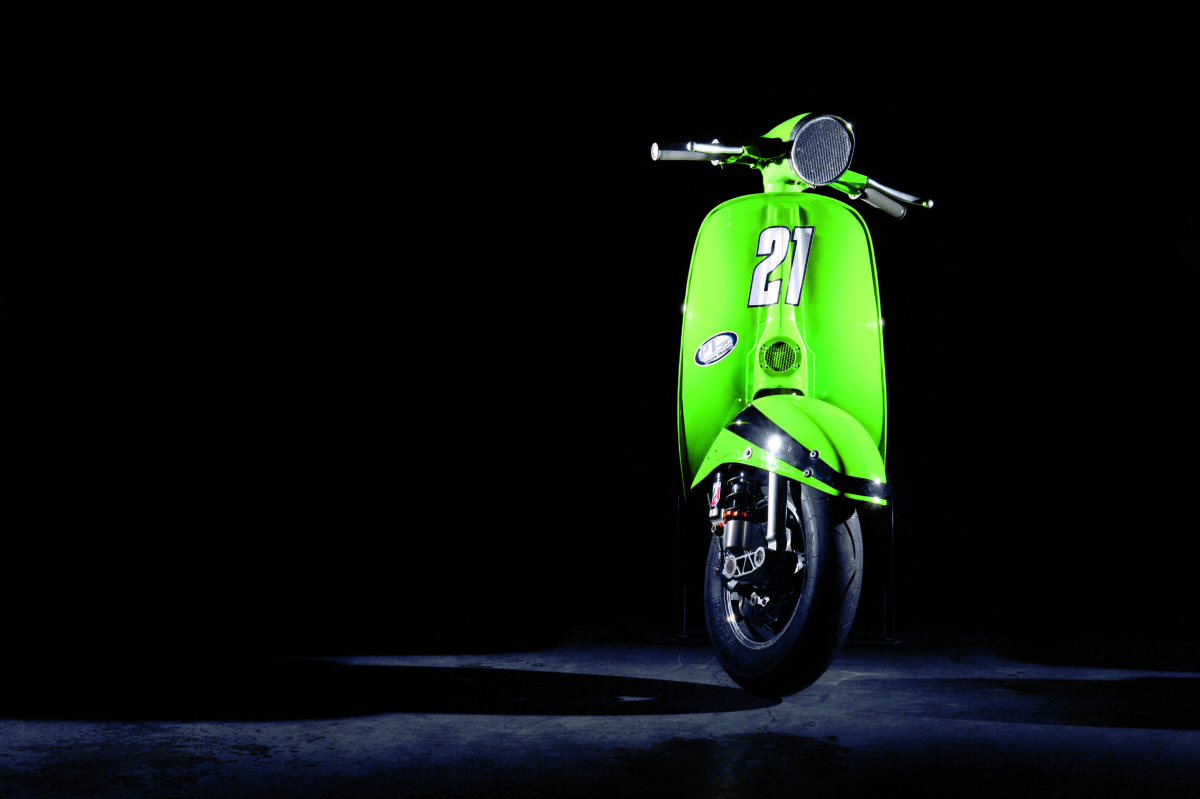 At last year’s scooter shootout, Tony O’Brien achieved an impressive 106.6mph top speed on his little Vespa 90SS. In March of this year there was a Top Speed event, again held at Elvington, which was temptation enough to get Tony back up to Yorkshire to try and beat his previous best.

In the late 1940s and early 1950s, both Lambretta and Vespa battled to show the worth of their new scooters in the motorcycle market. One of the ways they did this was to break world speed records, which both marques achieved admirably. In 1951, the streamlined Vespa Siluro took the laurels in the 125cc category with a top speed of 171.102kph (approximately 106.32mph). It was beaten soon after by Lambretta, and then – following some accidents – the various manufacturers of the day agreed to stop competing. Ask anyone these days what they think the world’s fastest Vespa is and odds on they’ll refer to the 1951 Siluro. Until now…

I think it’s fair to say that Tony likes a smallframe Vespa. His first scooter was a Vespa 50 Special which he rode to Clacton rally in 1985. He bought the Vespa you see gracing these pages, a 1969 90 Super Sprint, in 1986 for all of £240. A year later, aged 18, Tony started circuit racing using the 90SS chassis with a Norrie Kerr tuned Group 2 125cc engine.

Tony later moved to Group 1, the Kegra-tuned engine fitted with a Vespa ET3 barrel with a

short stroke crank to bring it to 100cc, and rotary valve induction as per standard to comply with class regulations. He won the class championship in 1990.

Taking a break from racing for a few years, Tony returned to the track in the late 1990s, competing in Group 3 (up to 150cc). The engine at this time featured a self tuned 135cc Malossi kit, 51 stroke crank and rotary induction. He was again successful, winning the Group 3 Championship in 2000.

With work interfering with his track schedule, Tony continued racing on and off, but he couldn’t manage to compete full seasons. This continued until 2010 when he came off at Mallory Park and unbeknown to him at the time, injuring his back fairly seriously.

With pain and subsequent treatment keeping him off both the road and the circuit, Tony needed a scooter fix and so he looked at sprinting – in particular top speed sprinting – to satisfy his craving. 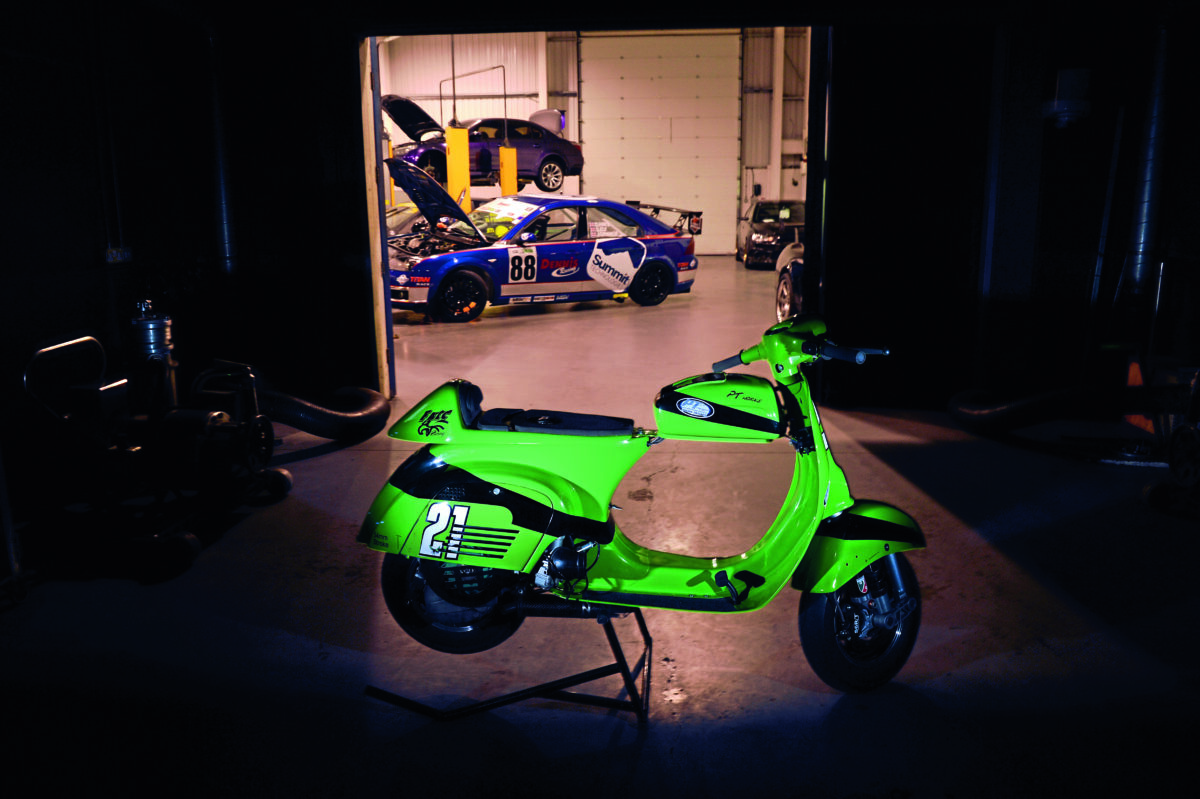 Finished in bright green, I’m sure a number of readers will recognise the ‘Green Hornet’ from previous sporting reports on these pages, both circuit racing and more recently, reviews of the Scooter Shootout at Elvington.

Tony has been using the Falc kitted engine since around 2008 and it was this motor that was used for straight-line racing, a number of changes being made to suit the different style of sport. The main one here is the gearing, which needs to be fairly high to reach the ultimate top speeds. Tony is currently using a five-speed box from Italy, which wasn’t cheap to say the least, but has proved itself on more than one occasion.

One sacrifice for tall gearing is that launching the Vespa off the line becomes harder as the clutch would have to be slipped a hell of a lot if Tony was going for fast quarter miles times. But instead he has aimed at top speed records, which means that he can take part in longer distance sprints, over half or a full mile, which allow him to get up to speed through his tall gearing. Potentially pulling 50mph in first should give an indication as to the way this Vespa is set up.

Another problem from a standing start is keeping the front end down, and with the SS90 having a shorter wheelbase than a comparative Vespa Primavera, it can be a bit of a handful. If he was going for a quarter mile sprints he’d need a ton of lead on the front to prevent it from pointing skywards too often!

Underneath the bright green frame are hidden the secrets of the performance, the main ingredients of which you can read in the sidebar. This doesn’t reveal all the details of course, as there have to be some secrets in such an impressive scooter.

What we can reveal however is that while the carb was jetted for each circuit and conditions Tony visited, and is jetted to suit each sprint, he tells us it’s not drastically changed or run near the mark. Leaning it off can give better performance, and over a quarter mile too lean is not much of an issue. However if you’re riding at full throttle for longer distances, even just half a mile, you can risk serious engine failure if you’re not careful.

Which leads us on nicely to the ‘det sensor’ or detonation sensor. This bolts to the head of the bike and senses if the engine is detonating, flashing/ blinking a green light about the EGT gauge every time it detonates. If it’s blinking too much, you know the engine is suffering from too much heat so you need to either stop and re-jet or adjust the timing accordingly. Technology can truly help when pushing 45-year-old scooters to the limit…

Monday, March 17, 2014, was the date, this time the track length at Elvington was double so Tony geared for 110mph. The track was also reversed so there was a possibility of a tailwind, whereas his previous 106.6mph run was into a headwind. Even so, that would only add half a mile or so at the most. His first run was a test, finalising the jetting. On his second run he achieved 115mph, which caused Tony’s and others’ jaws to drop. Trevor from Straightliners, who organised the Top Speed event suggested he got out and did another run

to confirm the speed wasn’t a lucky fluke, so Tony did, and went even better, recording a top speed of 116.2mph. Was that enough? Tony both felt and knew the Vespa could achieve no more on the day. “Everything was tucked in,” he told us. “I wasn’t looking where I was going, just watching the EGT gauge to make sure everything was good down there, and going for it.”

Of course this is not an ‘official’ world record, which has to include two runs in opposite directions within a set period of time. It is however the top speed of a very fast Vespa, run under controlled conditions and recorded by an independent organisation.

But is this enough for Tony? Erm no, he’s not finished yet. Holding him back is an appropriate gear kit suitable to achieve a higher top speed, but plans are in motion to get a taller gear kit for this little Vespa, so we’re sure this isn’t the last you’ve heard of the Green Hornet.

Photography: Tony O’Brien (with thanks to Torque Developments at www.tdi-plc.com for the location).

Originally published in May 2014 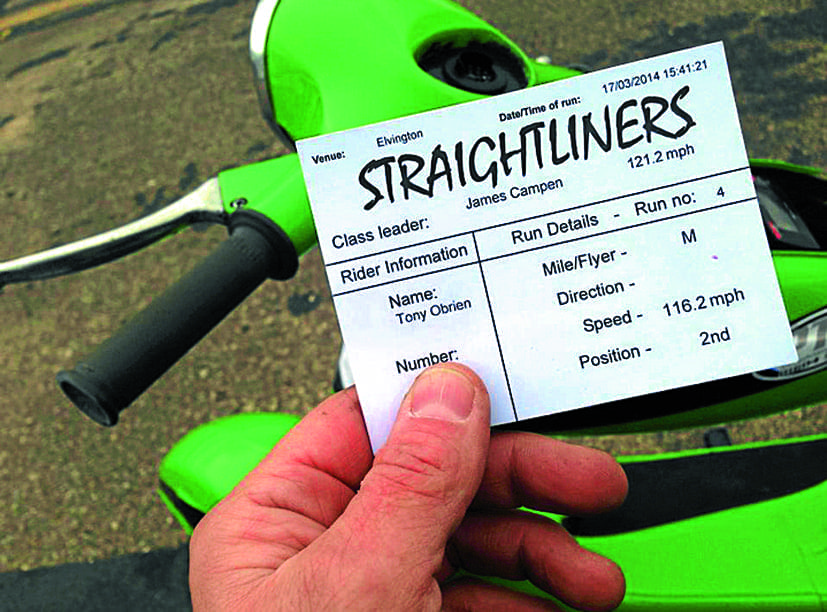