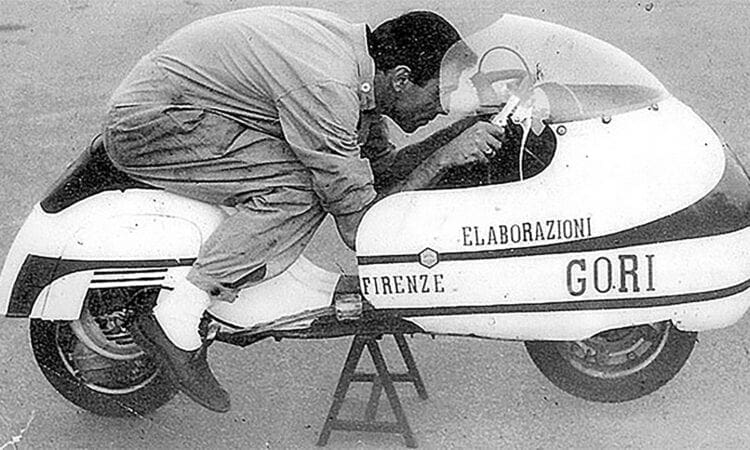 The tuning guru from Florence and his Vespa 90SS

Giancarlo Gori’s first encounter with scooters was in 1958, when he and his father Vasco ran a workshop on Lungarno Cellini in Florence. Together they tinkered with a Lambretta 175TV and soon realised that the engines of these scooters could be tuned quite a bit.

They convinced many of their customers to exchange their old motorbikes for upgraded Lambrettas and triggered a real tuning boom in Florence. Interested mechanics, good friends and loyal fans met regularly in Gori’s workshop to work together and talk shop. Giancarlo immediately founded a conspiratorial community, the “Scuderia Gori”, whose logo still exists today.

Of course, this attracted imitators and soon they were meeting on the A1 motorway at dawn on Sundays, just outside the gates of the Tuscan capital. The track was four kilometres long and apart from the occasional visit by the local police, the races went off without any significant incidents or accidents. Numerous tuning fans and enthusiastic kids soon lined the track to cheer on their teams.

With the experience he had gained, Giancarlo Gori realised another project in 1965: he tuned his Lambretta 175 Series III into a monster machine that conjured up 170 km/h on the asphalt in the motorsport mecca “Autodromo di Monza”.

With the decline of the Innocenti brand, Giancarlo Gori had to rethink and devoted himself more and more to Vespas. He sold tuning kits for the 50cc small frames, soon switched to 75cc and tinkered with a Vespa 125 Primavera in his spare time. But when the Vespa 90SS came on the market, it was love at first sight and Giancarlo Gori worked on improvements for this scooter.

Meanwhile, the “Scuderia Gori” had also switched to Vespas as a whole. The riders regularly competed in the Giro d’Italia and other scooter races in Europe. Gori’s tuned 90SS topped 120 km/h and he was not infrequently the first to see the black-and-white checkered flag.

In 1967, he finally took the tuning craze to the extreme by rebuilding his 90SS, which was already pushing the limits, and entered it in the “Week of Records” at Elvington Airport, UK. It cracked 150 km/h in the quarter mile and accelerated from 0 to 100 km/h in 7.6 seconds.

After that, it became a little quieter around Giancarlo Gori and the “Scuderia Gori”. It was only a good 50 years later, in 2011, that he revived his brand and today sells tuning parts, seats and more under the label “Gori Elaborazioni”.

The legendary Vespa 90SS has been in his private collection for many years, but now it is for sale. Interested parties can contact Giancarlo Gori directly via the homepage with a bid.