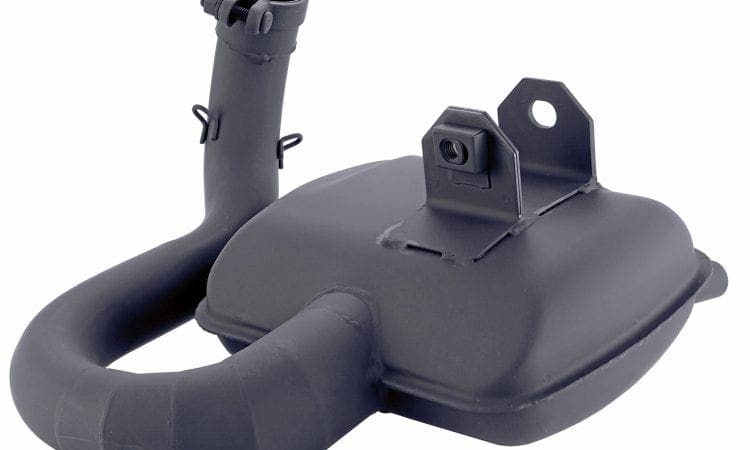 Genuine replacement exhausts for the Vespa PX were less than useful, I weighed up my options and made a choice… vorsprung durch technik.

Fits like a German
With Piaggio not being able to produce a spare part that fits without brute force and fettling (and since I last wrote about Vespa PX exhausts I’ve had a number of scooter shops who have told me they too have either given up trying to fit a genuine PX exhaust to a scooter, or end up charging the customer an extra hour or so’s labour to get it to fit), I went with the advice of both readers and friends and opted for a SIP Road 2 exhaust.
A steel exhaust that at first (and second) glance looks just like a standard pipe, it actually features a bigger downpipe made up of five welded segments which improves your scooter’s performance. The Road 2 also now features a new, extra security feature at the barrel end with clips added to the pipe for springs to secure it to a clip (included) you attach to the engine casing.

The price of the exhaust direct from SIP is around £118, but being distributed in the UK through VE UK there’s a good chance your local scooter shop will have some too.
As far as fitting it went, everything lined up precisely, as you’d expect from the Germans. In fact it was so precise and there was so little allowance for tolerances that I had to use a rubber mallet to get it on. It didn’t need persuading (and certainly no fettling), but a few soft taps simply helped it on its way.
Another bonus was that the barrel stub fitted tightly up to the barrel itself, and the clamp bolt did up tight and held it in place. You may recall that on a Piaggio exhaust these simply strip their threads at the sight of a spanner.
The carburettor was still slightly up-jetted due to the previous Sito Plus exhaust and I’ve found that it seems happy with the SIP like this to. Performance-wise I’ve not really noticed much more, if anything, at the top end. However, acceleration has improved and so has the Vespa’s pulling and
staying power – being happier to carry a passenger and also haul up inclines, even when fully loaded.
It’s done plenty of local commuting plus more than 550 miles to the BSRA rally at Woolacombe at the end of September, and the slight increase is really noticeable. Whereas before the P2 was just about hanging in there with its slightly faster peers, now it’s keeping up, even leading the pack. I should also point out that it sounds quieter than the previously enjoyed Sito Plus too. The SIP is maybe deeper than a standard PX200 pipe, but nothing that you’d write home and complain about.
So it’s all good so far… but I suppose the real test is that of longevity. The Piaggio pipes may not fit these days, but when you could get them on you got your money’s worth out of them before they needed replacing. The Sito fitted better, but the life expectancy wasn’t great. If the SIP can go the distance, then the fact it’s a little more expensive than the previous pipes won’t matter in my eyes. But of course, only time will tell…

Clutch injury
My PX200 gets used a lot, if not by me for regular chores and general work, then by the missus for her daily commute. It’s also a scoot we loan our to friends from overseas when they come over to visit and want to ride to a British scooter rally. You’d think therefore that it gets regular maintenance, but sadly (and embarrassingly)… it doesn’t.
A few weeks before Woolacombe I’d noticed the clutch lever slacking off a little, but as everything still worked, I didn’t worry too much. Of course it didn’t get any better on its own and as time marched on I decided that maybe having a closer look was in order.

After snapping a throttle cable on the way to Strictly Scooters this year and then discovering I didn’t have a spare, that issue had been resolved. The fact remains, however, that it’s far better to replace any worn out parts at home, where and when you want to, rather than unexpectedly at the side of the road whenever Sod’s Law decrees is the right time.
Taking a closer look at the clutch lever, there was plenty of movement in it before the cable was being pulled, which confirmed something was wrong. I had the four screws out from under the headset top, fed the speedo cable up the fork leg to give it a bit of slack, removed the top and examined the cable. It was all okay up top, suggesting that it was at the dirty end that things were going pear shaped. Sure enough the inner was breaking and the cable was operating on just six thin strands of steel by the time I took action. If I’d done nothing I reckon I could have measured my next journey in single figures.

Closer inspection
Lying underneath the scooter I could see the cable adjusters were going rusty, as was the clutch cable, and generally things under there were looking neglected.
I therefore made a point to check the engine oil, clean up the casing, lubricate various moving parts (including the rear brake pedal, brake arm and even the
cable adjusters’ threads), and basically give it all a bit of a clean.

The same went for the headset, as not only did I grease the clutch lever before refitting that, but took a few minutes to check all the electrical cables were okay and terminals secure.
Finally, when refitting everything I topped up the two-stroke oil tank, made a note that the rear tyre probably had only 800 miles left in it, and double checked the tools and emergency spares in the toolbox.
To be fair the poor Vespa has done a whole lot of work this year, day-in, day-out, from riding across Europe in the snow to a number of seaside towns in the summer, and it’s had little more than fuel top ups when required. These PX200s really are a bloody good piece of kit and it’s such a shame that the EU saw fit to pass laws that would see them ostracised and eventually outlawed from the market.
By the way, it was a good job I got another tyre in as I has a rear puncture on the way down to Woolacombe. Luckily the SIP tubeless wheel rims meant it was a very slow puncture, although it did cause some scary handling when racing through fast roundabouts without realising the back end was running at half pressure until the scooter was banked over – much to the amusement of my fellow riders!
Andy

The next problem I’ve got to solve is why does it keep blowing rear light bulbs? Not every day, or every week, or even every month… but it seems to happen sporadically, without obvious reason, and it’s bloody annoying!