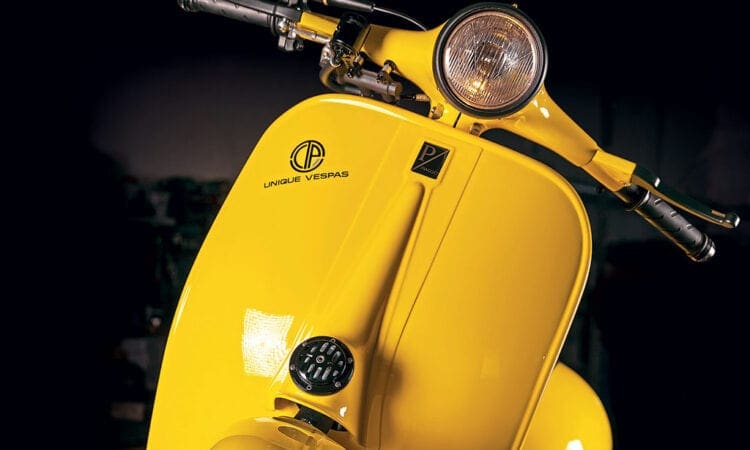 Founded by Patrick Adam and his business partner Harald Greiner, CTP has a very close relationship with Pinasco, acting as development leads for the majority of their PX performance kits.

Last year CTP used the Milan Motorcycle Show to unveil Project Lieblingsstück, a heavily modified 1958 Vespa VNA 1T that was featured in Scootering issue 379. This year, CTP presented its tribute to the Ducati 748S, but as Patrick explained not everything is quite as it seems. Wolf or sheep’s clothing?

“The ultimate sporting Vespa has to be the GS,” began Patrick. “For Ducati, it’s the 748S. Finding a way to combine the two has long been in my mind but the price of even a rough GS has always been prohibitive.

“Whilst working on Project Lieblingsstück I realised it was possible to of the early Vespa frames. This would make the project affordable and ensure that purists wouldn’t be offended.”

Having acquired a salvageable VBB, Patrick first began modifying the frame to closely resemble his beloved GS. The result is so convincing it’s only on very close examination the differences reveal themselves. Most noticeably the floor has been carefully sculpted, a feature often overlooked on imitations but absolutely critical to creating the authentic GS look.

CTP has a close working relationship with Pinasco, and it was only natural the engine would be derived from its catalogue of parts. Unusually, Patrick decided not to use a large block engine on this build, opting instead for Pinasco’s small block casing.

Admittedly, these are of the ‘slave’ reed-valve type, but nevertheless they perfectly showcase the amount of power it’s possible to squeeze from the humble PX125. Power is generated from Pinasco’s Vespone 190cc cylinder unit that breathes through a 28mm PWK carburettor.

The latter isn’t a name as popular as Dellorto among British scooterists, but they’re widely used on competition trail bikes and have an excellent reputation for both quality and reliability.

Finally, a Voyager Evo III exhaust by Pipedesign completes the engine’s business end. Harnessing the ensemble’s healthy 35hp is a Pinasco Bull clutch while three short and one long gear should make it a happy day out for lovers of G-force.

Ignition is provided by a Pinasco Flytech unit with a CNC fan and the all-important DC electrics are housed in a rather neat box under the nearside panel that also provides storage space for necessities such as two-stroke oil – after all this is a scooter that’s intended to be ridden and not simply admired.

One advantage of using Ducati’s 748 as inspiration is the colour scheme. It’s bold yellow, black and white paint could have been designed with Pinasco’s house colours in mind and they translate easily to the Vespa’s voluptuous curves.

As Patrick was keen to point out, the 748 tribute is missing one thing that’s common to almost every other street racer: “I didn’t want any logos or branding to detract from the scheme’s overall simplicity,” he said.

“I almost achieved it but if you look closely there are one or two that simply couldn’t be erased.” Walking around the Vespa it’s clear a huge amount of planning went into the build, but even so Patrick’s favourite detail comes as something of a surprise.

“The throttle action is very quick. Firstly, there’s an adaptor on top of the carb that reduces cable resistance, and secondly a short stroke throttle by Domino.

“Fitting quick action throttles is nothing new, but I’m always frustrated by the offset they create on scooter headsets. On this machine I’ve packed out the gearchange, only by a few millimetres, but it gives a much more balanced appearance. The wider headset also gives a great feeling of control at speed.”

Although Patrick remains coy as to whether there’s another project on the bench there’s no doubt CTP is a design house to watch.

For two consecutive years they’ve produced a Vespa street racer of the highest quality. Almost 20 years after making its debut Ducati’s 748S remains a firm favourite amongst connoisseurs. CTP’s Vespa is a more than fitting tribute.