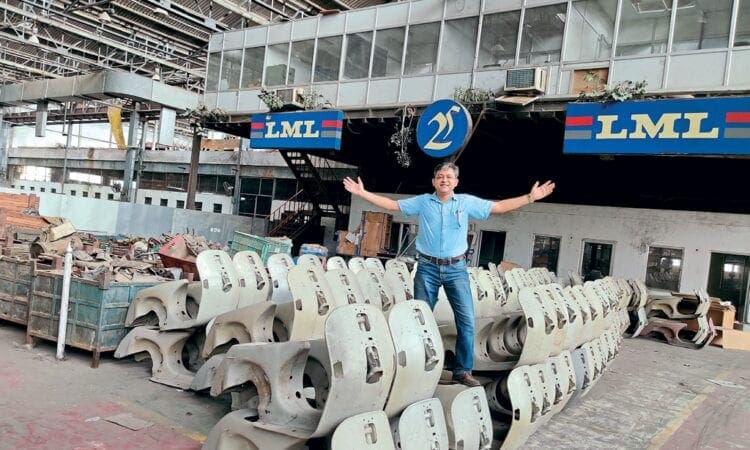 The LML factory is being dismantled, but is that the end of the story?

Where did it all go wrong for LML? It’s hard to believe, but it’s only a decade ago that the company’s fortunes seemed to be riding high.

After all, it was the success of LML’s PX derived ‘Star’ that forced Piaggio to bring the PX back into production.

Never content with warming up Piaggio’s leftovers, LML also innovated and for a while it looked as if their four-stroke engines would be the geared scooter’s answer to increasingly stringent emissions regulations.

Other than overly complicated electrics and the inability to cure a problem that broke speedo cables with monotonous regularity, these were good scooters. A well set up LML 200cc four-stroke is one of scootering’s best-kept secrets, just ask an owner.

Unfortunately, poor management, a lack of investment and poor sales in their home market meant that the demise of LML was inevitable.

Subsequently listed on the Indian Stock Exchange, LML enjoyed some success in this market and its experience of working with a French company may have prompted Piaggio to enter into a collaborative arrangement during 1984.

The association with Piaggio lasted for 15 years, during which time a number of models were launched into the potentially lucrative Indian market.

After Piaggio’s departure, LML continued to produce the PX, albeit a re-engineered version known as the Star.

Once freed from Italian obligations, LML began to develop its own range of machinery and in 2000 the company’s technical innovations were formally recognised by the Indian Government.

Unfortunately, even collaboration with the Daelim Motor Company of South Korea couldn’t bring the company’s rampant spending under control.

At a time when Honda and Suzuki were selling 50,000 scooters per month, LML failed to pay any dividends to shareholders.

In 2006 the company filed for bankruptcy, but was saved by a last-minute rescue package. Sadly, even this new investment couldn’t revive its fortunes. In 2017, LML filed for insolvency and the factory gates closed for the final time.

All LML’s assets have passed into the hands of administrators, who are disposing of them on behalf of the Indian Government.

Anyone who’s travelled to India will be familiar with the Government’s love of bureaucracy, and unsurprisingly it’s taken some time for the liquidation process to gain momentum.

In recent weeks a firm date has been set for the site to be cleared and the factory is now being dismantled with an almost indecent haste.

The timescale for completion is short, presumably to accelerate sale of the land. This isn’t just because it’s the most valuable single asset, there’s also a strong desire to regenerate the area.

The company was a major local employer, both on the factory site and in the broader supply chain.

The closure has seriously affected the local economy. One visitor to the premises was Manish Mittal of Uniauto, and what he found looked like a dystopian vision of the future.

“I visited LML during the last week of June 2019 and it was really sad to see the ruins. Everything was being brought down and being sold to whoever could offer the best price. Scrap dealers were scavenging for copper from cables and scraping iron sheets from massive serpentine ducts running along the roofs.

“At the same time parts dealers rummaged through boxes searching for any remaining NOS parts. With heavy heart, I roamed around the factory from one hall to the other and the scenario was the same everywhere, unimaginable. It seemed like a huge movie set was being brought down after the filming had been completed.”

Some of the NOS parts have already found their way to European dealers and Scooter Centre Koln has recently acquired a batch of early PX disc fork sets.

Fitted with the drum-type hub, these have proven to be extremely popular and anyone interested in securing a set should do so quickly.

Although the supply of manufactured parts is finite, the prospect of heavy machinery being taken into fresh use is very real.

Whilst Manish reports seeing some heavy plant being dismantled for scrap, the good news is that at least some tooling has been saved.

Last month we reported that negotiations were ongoing between the administrator and a major European concern. We can now confirm that the interested party is none other than SIP.

As Ralf Jodl, co-founder of SIP, confirmed to us: “We were offered the opportunity to buy all or part of the tooling, and we have some contacts to restart production. At the moment we are not sure what tools have been saved, and have no firm date when production will begin.”

This isn’t just an exciting time for SIP and LML owners. The prospect of factory quality spares for PX derivatives is good news for Vespa owners around the globe.