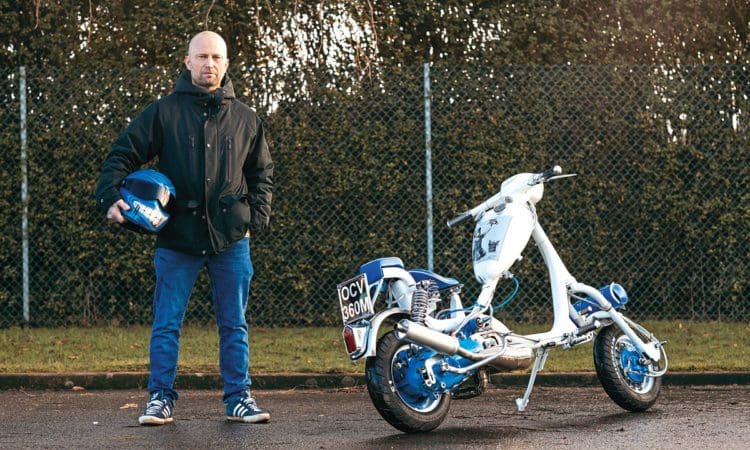 As Covid restrictions subside and life returns to normal there’s a risk that the unbelievable efforts of NHS workers will be forgotten. Andy Randall’s determined that won’t be the case.

Launched under Clement Atlee’s radical and reforming post-war Labour government, the National Health Service was drafted, blueprinted and presented by Health Secretary Nye Bevan. Officially starting life on July 5, 1948, it was an integral part of sweeping social changes arising from the ashes of the Second World War. During its history the NHS has adapted and changed to conditions in society but, arguably, its finest hour was during the Covid pandemic. Extraordinary efforts led to it being awarded the George Cross in 2021.

Before commencing work on his next creation, a follow-up to his Freddie Kruger themed chopper, Andy Randall had been pursuing a few half-baked ideas as possible themes. The onset of the Covid pandemic, with the sheer unrelenting efforts of National Health Service workers, with double shifts, living away from home and literally putting their own well-being on the line to care for others made the decision a no-brainer. This Lambretta chop is Andy’s own personal tribute to the sacrifices made by those real-life superheroes at the sharp end, during the dark days of the pre-vaccination rollout.

So far as style’s concerned, Andy admits that he was heavily influenced by the well-known Captain Pugwash themed chop. “That was mainly white and even before I’d made my mind up on the final theme I was working on white being the main colour,” said Andy. What Andy hadn’t realised was that the NHS, through the Secretary of State, is very protective as to who can use its logos. The distinctive white on blue NHS lozenge logo was copyrighted in the early 1990s and copyright breaches tend to have serious consequences. “By sheer luck I went for the NHS, with a superhero ‘S’ in a triangle instead of the standard logo. The ‘Superhero’ version was around during the worse part of the Covid pandemic and I used those for the petrol taps.” One consequence of this tribute theme was that the ‘less is more’ ethos of a chopper could be retained. Blue and white are readily associated with the NHS; the colour combination makes the connection without the need for complicated graphics.

“I was lucky to know someone who could make me a tool roll and cover the seat in NHS blue leather,” said Andy. “I then had both hubs, the engine casing and a small box at the back hiding the electrics sprayed in NHS blue.”

The success of most choppers is dependent on the tank artwork – done well, it ties the theme together and in this case Andy chose well. In May 2020 the street artist Banksy showed his own appreciation for the NHS frontline staff, with a rare, on canvas, piece of artwork. Titled ‘Game Changer’, the one-metre-square canvas came with a note addressed to NHS staff which read: “Thanks for all you’re doing. I hope this brightens the place up a bit. Even if it’s only black and white”. A small boy dressed in a T-shirt and dungarees is depicted next to a waste bin which has Batman and Spiderman figures within. They’ve been cast aside, replaced by the new superhero, a nurse in a face mask, with a cape and a red cross emblem on the bib of her uniform. It’s a poignant piece of work and one that Andy was determined to incorporate in the build.

The scooter that formed the basis for this project was bought by Andy in several boxes. “It had already been cut but I still went to work with an angle grinder, doing my bit modifying it to how I wanted it to be,” he explained. “That included cutting the rear end off and I did a bit of work to the tank too, smoothing and blending the shape. The engine is as purchased, being fitted with a running 150 Li engine that had a 175 top end, big carb and chrome exhaust. As it’s a chop I didn’t want it to be anything too quick, not to start with, maybe I’ll go for a Mugello or a TSI later down the line.”

The paintwork was completed by Air FX who did a fantastic job. The mural has had a curl of the print paper added to ensure it’s obvious it’s a copy, not that anyone would think it’s an actual Banksy on a scooter. The white and blue colours are a simple combination yet, coupled with the mural, it’s obvious it’s a tribute to the National Health Service during Covid with the slogan on both wheel rims, ‘Ride out to help out’ being a play on the Government’s ‘Eat out to help out’ campaign. “I’d planned to have already shown the chop early in 2022, but due to a combination of reasons it didn’t happen – the first time out will probably be a local Easter egg run. I’ve no fixed plans for adding or changing anything, but personally, I find that custom scooters have a habit of evolving. I may add a bit more chrome, as well as perhaps uprate the engine in the future. For now, I’m just looking forward to clocking up a few miles and to show it a few times, while it’s still topical.”

Given the impact of close to two years of restrictions, there’s little doubt that Andy’s tribute will be relevant for some time to come.