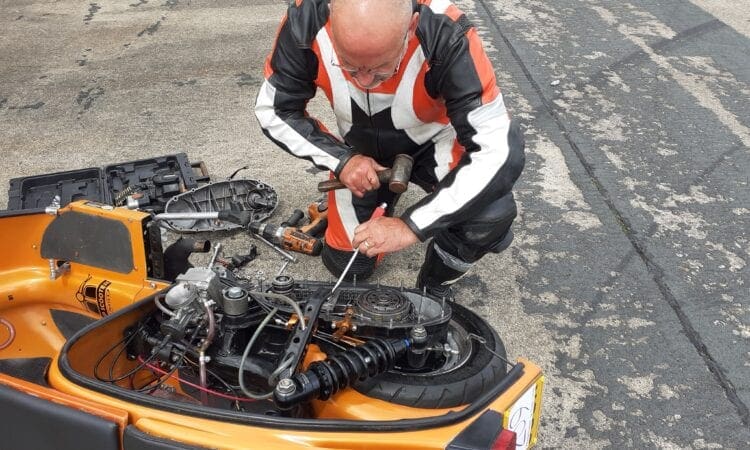 Sprint veteran Eric Cope has faced many challenges during his time on the tarmac, it often seems like he suffers one bit of bad luck after another (in terms of running conditions). But today, 5th July 2020, the stars aligned and the gods of speed looked down upon Eric with favour. In near-perfect weather conditions (the type of weather which you want to be ‘bringing up the rear’ as opposed to ‘slapping you down face-first’) for anyone wanting to get the best out of their machines, the day could not have gone better. With each run completed, Eric knew he could re-gear and go again… pushing for more and more each time. Run after run the speeds climbed, as Eric increased sprocket sizes to see how far he could push the machine. The result? A final best run of 127.591mph (that’s 205.33 kph!).

The best bit is, it’s a full-bodied, road-legal machine… taxed and tested! Don’t get me wrong, I’m not suggesting this is the type of scooter you want to be doing any serious miles on, least of all due to its thirsty nature, if not because of its heady power figures! But still, a full-bodied Lambretta hitting these speeds, and not once (maybe others have done the same and received a ‘spurious ticket’?) but run after run, showing consistent improvements with gearing changes throughout the day.

Elvington is known to many as the place Top Gear’s Richard Hammond crashed during a top speed attempt, or for Guy Martin’s record attempts on everything from bikes to tractors. This was the venue for one of Straightliners many events which they organise throughout the year, hosted by Trevor Duckworth and team. The event is run using the same high-end timing equipment as used for record attempts to worldwide standards. The event was run one-way-only, over a one-mile distance which included the option of doing just a half-mile or combining both distances on one ticket. Eric cope, who has previously featured in Scootering Magazine after an impressive 112.3mph pass, was keen to make up for last time when he ran out of available gearing to progress any further, so this time went fully equipped with every sprocket and chain option possible, plus a collection of tyre sizes to fine-tune the gearing and exploit the top speed potential fully this time.

Following on from recent engine upgrades over the winter, Eric started off gently (or so he thought) on his freshly rebuilt motor, with no more than dyno time to run it in, and was shocked to see a very first run of over 119mph. The remainder of the day was spent playing with gearing and tyres to see improvement upon improvement, resulting in the insane final top speed of 127.591 over the mile, and an earlier run of 122.875 over the half-mile! This speed beat a Yamaha TRX850 and was not far behind either the 1250cc Suzuki Bandit or the 1275cc Triumph Daytona which both also took part.

Scooter tech spec is as follows: The 71.5mm RB225 tuned cylinder is coupled with a 62mm stroke crankshaft making the motor capacity approx 249cc, in order to keep it within ‘up to 250cc’ class rules. It was also running in accordance with the full bodywork regs, as agreed by a collective of like-minded racers. In recent years a swap from running regular pump fuel to race fuel, in order to keep pace with the competition within the class who all use similar, was allowed. But the motor amazingly runs a standard Lambretta casing, and therefore stud positions, along with a standard 4-speed gearbox. So if any steely-eyed tuning ‘gurus’ out there are interested, the engine casings are completely standard! Not surprising really, especially considering recent articles in Scootering magazine and current ‘ScooterFactory’ YouTube videos (see the ‘wasted tuning’ video here: https://youtu.be/SxQV0xz4q6E), thus it runs no crankcase porting. So if ever a ‘the truth is on the tarmac’ quote needed ‘real world’ clarification, then I guess we have seen it today… Mile top speed = 127.591mph (205.33kph), and Half-mile top speed = 122.875 (197.74kph). Nuff said.

Thanks to: Harvey Brewster photography for images within this article, Eric’s sponsor Kenny Bradford @ KB Paintshop in Hull, and some bloke called Darrell @ TaylorTuning, apparently he helped to do something to the cylinder ports and other stuff (probably just an old-hand file to the exhaust port and a few carb jets by ear etc).

PS – Keep an eye out in Scootering Magazine for a full article on this machine, the rider, the tuner… and of course editor Dan’s YouTube page (ScooterFactory) for a video of the event… 😉