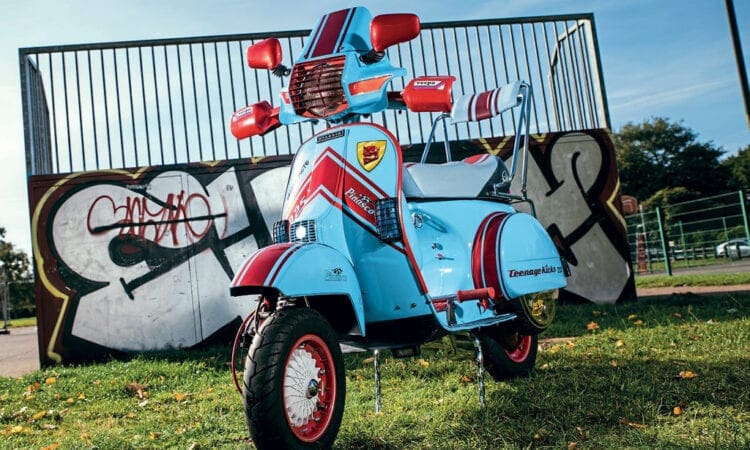 Thinking back, those that spent their formative years traversing the UK during the 1980s to attend National scooter rallies, really did have the time of their lives.

Never mind the politics of that decade, where crippling financial recession experienced by many was countered to a degree by the rise of the Yuppy.

While Britain’s manufacturing industries were decimated, along with manual employment in working-class communities, city slickers got rich quick. It was hard times for the majority, but profitable for the minority.

Escapism for some was the opportunity to head to a coastal resort for a weekend away every few weeks with like-minded people, albeit At that time, Lambretta Club Great Britain had some involvement with the Nationals.

Scarborough ’82, as well as being a National rally, also had a Scooter sprint Hill Climb event at Oliver’s Mount as part of the weekend schedule. The rally campsite was in the shadow of Oliver’s Mount circuit that year. Not that Paul recalls that particular aspect.

What has most stuck in his mind after almost three decades is that it snowed, and also that the guesthouse he booked into allocated him a room large enough to accommodate its own scooter rally. Indeed, it did snow on the Saturday evening, which, from Thinking back, those that spent their formative years traversing the UK during the 1980s to attend National scooter rallies, really did have the time of their lives the majority were funded by a tiny budget.

Scooter loaded with a tent, sleeping bag, toothbrush and maybe a change of clothes, ‘80s scooter rallies provided a welcome respite from the depressive drudgery of everyday life for many, whose impressionable years were shaped by the scooter boy era.

Teenage dreams, so hard to beat

Paul Fraser bought his first scooter, a new Vespa PX125E, in ‘81, which he rode to the first National the following year. The rally destination was Scarborough.

At that time, Lambretta Club Great Britain had some involvement with the Nationals. Scarborough ’82, as well as being a National rally, also had a Scooter sprint Hill Climb event at Oliver’s Mount as part of the weekend schedule.

The rally campsite was in the shadow of Oliver’s Mount circuit that year. Not that Paul recalls that particular aspect. What has most stuck in his mind after almost three decades is that it snowed, and also that the guesthouse he booked into allocated him a room large enough to accommodate its own scooter rally. Indeed, it did snow on the Saturday evening, which, from personal experience, I also remember all too well.

After worsening misfire problems on my Lammy, I stripped down the top end and mag’ side of my GP, and blagged a lift to and from AF Rayspeed to have the mag’ side bearing, both inner and outer, replaced.

It was subsequently rebuilt by feel, in the dark with the weather being not only bitterly cold, but it was snowing, too. More by sheer luck than anything else, my Lammy fired up first kick after the necessary transplant and didn’t miss a beat on the homeward journey.

Despite his first experience of a National rally which included snow, Paul wasn’t in any way put off. Far from it, in fact, as he rode from Norwich to most of the National rally destinations during the ‘80s.

Similar to many of his contemporaries at the time, and echoing the original mod era, what was left over as disposable income didn’t stretch too far after living expenses were covered and HP repayments on his scooter had been met.

As the ‘80s rolled on, so popular styles of modifications to scooters evolved. As a result, AF Rayspeed S-Type Lambrettas, as well as Armandos Specials based on P-Range Vespas, caught his eye.

The Armandos Special was the scooter that a then younger Paul had aspirations to one day own, with a dream to ride a Vespa much like those iconic ‘80s Vespas.

Another girl in the neighbourhood

Moving forward a couple of decades, Paul found himself in a position to revisit those hopes, dreams and aspirations of his teenage and young adult years. He had in mind exactly what he wanted, along with what he needed to create and realise that dream machine from his misspent youth.

“I rode a P2 to most of the ‘80s rallys, so it had to be a P2 of a particular vintage. Disc models and electric start models were out, so it had to be a P range Vespa first registered either in the late ‘70s or early ‘80s. It also had to be in the right sort of condition, with full, unmodified, uncut or trimmed body and panel work.”

Before physically starting work in earnest on his project, equally important to Paul was sourcing and acquiring an abundance of genuine ‘80s aftermarket items.

“It took me quite a while to find a P2 which was right for what I had planned. After a few wild goose chases that initially appeared to be promising, but that turned out not to be suitable for my requirements, I found a 1978 Mark1 P200E which was the ideal Vespa.

“It wasn’t until I started to actively look for and obtain original, genuine ‘80s extras that I discovered that new old stock was becoming almost as sought after as genuine ‘60s extras, and the prices for some ‘80s aftermarket additions were beginning to spiral upwards in price.

“What I had in mind was my own personal take on the P-range Armandos Specials of the ‘80s, which meant it was pretty much essential that genuine ‘80s extras were fitted.

” Probably the one that I was most pleased with locating was an authentic ‘80s anti-dive kit, which was still in its original packaging and which cost me a very reasonable £50. It took me around four years to amass the scooter and the extras, and for the project to run its course from start to finish.”

Aiming for ‘80s authenticity, after a few attempts, Paul had to compromise due to practicalities. He obtained and fitted an original Driver screen which, as they were well renowned for even when they were new, were prone to cracking and splitting. That made the attached fixed mirrors as useful as a chocolate tea-pot.

True to form, Paul’s Driver screen, fitted to Teenage Kicks, cracked several times. His compromise was to buy a later metal version of a Driver screen, to which he transferred the mirrors, wedges and rubbers. Job done, with no danger of cracking or splitting issues either.

A masterstroke of colour coordination

Combining light blue and deep red for the eye-catching, contrasting colour scheme on his ‘80s inspired Vespa has proved to be a masterstroke by Paul.

Not only does the striking two-colour livery design adorning Teenage Kicks complement each other perfectly, it also provides something of a talking point.

Claret and blue being the (home) colours of a small number of football clubs, supporters of said teams, it has to be mentioned, have a tendency to utilise those at any opportunity. With the latter in mind, does Paul have any football affiliation with connotations of claret and blue?

“I don’t support any football team, though I’ve been asked if I support West Ham, Aston Villa, Burnley and even once, Hamilton, which I don’t.

“At that point, Daz wasn’t too certain about it, and said something along the lines of, ‘It’s your scooter if you’re sure that’s what you want.’. Having not been convinced initally, the end result changed his perspective. It’s an Aprilia candy red and Suzuki candy blue, with lots of pearl.

“I’m planning on adding a few graphics to the side panels. I’ve always liked the Undertones song Teenage Kicks, and it’s also a name which is totally in keeping with my scooter, as it’s inspired by my early years attending the scooter rallies in the ‘80s, and the scooters that were around back then.”

When things don’t go to plan, simply walk away

Obviously, the final main part of the makeup of Paul’s ‘80s inspired Vespa is the engine. With the project geared to his creation, being his take on an Armandos Special, it’s no surprise that there are several Pinasco parts in the make-up of the motor.

“It’s a Diablo engine, built by Alan Terry, and set up by Stu at SG engineering. Using a Pinasco 225 top end with a 60 mm long-stroke crank, along with the other changes, its good for 70-75mph, which is fast enough for me, I could get more power out of it simply by changing the exhaust.

“With the engine set up exactly how it is, on a dyno it gives 14.5hp. We tried a better pipe and clocked just over 20hp. If I wanted seriously fast speeds I’d get myself a motorbike. Besides, the Pinasco exhaust is not only integral to the appearance of Teenage Kicks, if I had a better exhaust fitted it wouldn’t look right to me.

“It runs very smoothly, not at all revvy. Handing is very good, but it’s a bit stiff on the front end, probably due to the anti-dive kit fitted, which had to be modified to allow for and work with the front disc brake.

“At the moment I’ve a sealing pad which appears to not be sealing as it ought to on the original casings. It’s not causing me any loss in performance, but fuel consumption has increased massively.

” I got new Pinasco engine casings, which will replace the originals as soon as I can get it booked in to have the engine parts transferred and rebuilt in the new casings.

“I’ve learnt a lot during the build, the most valuable being that when things aren’t going to plan, walk away and go back with fresh eyes another day. I think I’ve got a bit of a taste for it since doing Teenage Kicks, and work is already getting underway on my next project, which is going to be a Vespa Street racer.”