In September 2014 my wife and i went on a 3 week trip to China with my brother and sister in law. We were out and about on our first full day watching people on their motorcycles and scooters going about their business in the city of Guilin, (well actually it seemed like whole families) on one motorcycle/scooter along with boxes, straw bails, cats, dogs, chickens, kitchen sinks etc. I suddenly realised that 90% of the motorcycle/scooters that we encountered were electric. Surprisingly though they were not slow with respect to speed either, easily achieving 28- 30 mph (45 – 48kph).

I started to ask myself “why has this not caught on in the UK”. We were then constantly looking for electric scooters or (E Scooters) and thinking of ways to promote them in the UK. A few months after our return I found a company that was more than willing to discuss the prospect of supplying us with an E Scooter as a sample and after some modifications made to the E Scooter in China to enable it to be used legally on UK roads we took delivery of our sample in March 2015.

In August 2015 we finally received a registration number for our E Scooter. We then started road testing. The torque and acceleration that you can get out of an electric motor is actually quite surprising which makes getting out of junctions very easy even for a small moped. The specifications for our sample E Scooter was 28mph with a range of 30 miles with a full charge, now this is reasonable if you can find a convenient charging point to get you back home after the 6 to 7 hour charge required from flat. For me that was not an adequate range so I set my task to extend that range by doubling the quantity of battery’s in our E Scooter.

At the beginning of November 2015 we flew to China to visit the factory. Our contact Sophia told us that she lived in the City with her husband and daughter at the weekend but lived near the factory in a small apartment during the week to be near work. On the morning of our factory visit we were met by Sophia at our hotel and taken to the factory by taxi. We drove past some of the factory units still being constructed. We were on a 4 lane road where there was very little traffic. It was explained to us that the roads were so large because they were planning for future expansion. Sophia chuckled when I told her that in the UK we seem to build roads that are too small and then spend millions of pounds closing roads again to widen them when we realise that they are actually too small (M25 need I say more).

We arrived at the factory at about ten and then showed around the plant and warehouse where all of the existing Chinese customer scooters were stored. After lunch we got to the part I was looking forward to and discuss my ideas and requirements for the production run of our own E Scooters. We were shown to a partly dismantled E Scooter which was very similar to the one we had in the UK. All of a sudden there were 3 engineers plus Sophia and her assistant including myself and Julia my wife around this E Scooter, each with a copy of my emailed plans drawings and pictures that I had sent in advance of our visit. They seemed to be surprised that I had managed to modify my E Scooter to accept 12 Sealed Lead Acid battery’s and after some discussion with the engineers via Sophia and with me telling them of the weight problems they suggested that they would make a lithium polymer Lifepo4 NCM battery to our specifications.

Our latest idea is to have removable battery’s in our E Scooters so that people can remove the battery and charge them in their flats or apartments. They could even have additional battery’s and chargers at work as example to leave on charge and swap when required.

A Question I have asked myself many times since our visit to China and embarking on the road to the development of electric motorcycles is … can I change the attitude of a hardened scooterist.

The answer is probably no but for me after riding this E Scooter has opened my eyes to the world of electric motorcycles and encouraged my enthusiasm for them.

I can see these E Scooters being a big thing in Towns and Cities around the country soon, including commuters wishing to get to the station with free parking on offer. 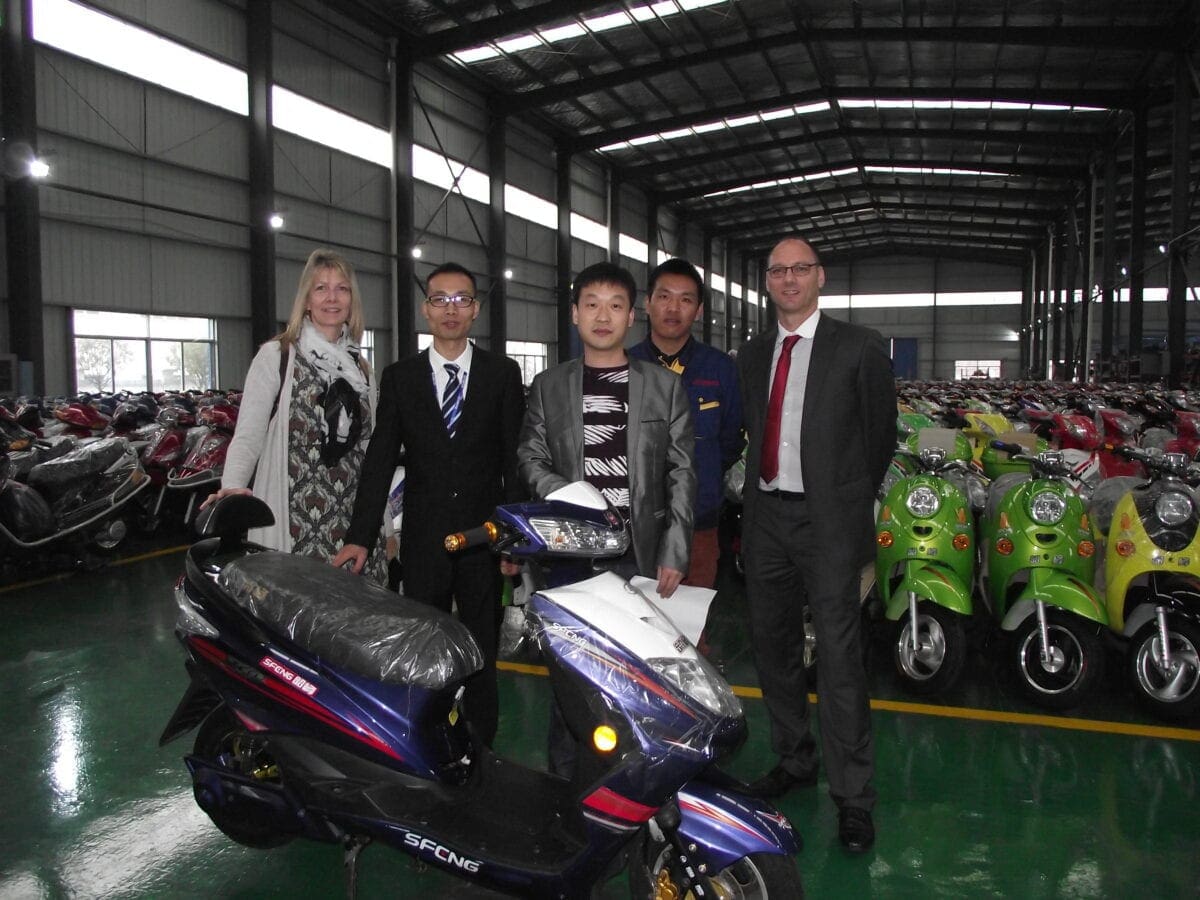